While at Lollapalooza 2016 Grand and Scott Hutchison talked with QRO.... 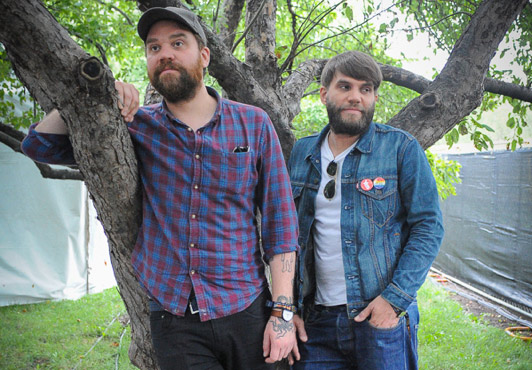 While at Lollapalooza 2016 (QRO recap) Grand and Scott Hutchison talked with QRO. In the conversation, the drummer & singer discussed making their new record, Painting of a Panic Attack (QRO review) with producer Aaron Dessner, playing sad music under the sun, how it will play in Peoria, not playing their first record (except in Chicago), why Scottish musicians are so funny, Brexit, their Obama connection, cucumber sandwiches, and more…

QRO: How has this tour been?

QRO: How was playing Peoria [two nights prior]?

SH: Interesting.  It was our first time there.

Grant Hutchison: It was strange – it was radio thing.

SH: It was a new venue [Limelight Eventplex], at night. It was fun. It was a shame, because Peoria seems like a nice, sweet city, but this venue was kind of out of it. But we went bowling at the vast pro shop…

QRO: In the States, that city is sort of synonymous with Middle America, ‘How will it play in Peoria?’

Frightened Rabbit playing “Keep Yourself Warm” live at Terminal 5 in New York, NY on May 5th, 2016:

QRO: I always found your music rather tragic. What is it like playing sad songs under the summer sun [note: not that it was sunny that day]?

SH: There are joyful elements to our music, and I believe… It’s funny, when you bring it out into a setting like this – even though it’s not sunny right now – it can take on a whole new meaning.

It’s sort of a catharsis, I guess, for a lot of people in the audience. Whereas on record, yeah, it’s kinda sad, it’s tragic, but out here…

SH: There’s hope, and when you bring a collective of people together who all know and understand and feel something for those songs, it kinda whips it up into a different stratosphere.

QRO: I’ve noticed that Scottish musicians, even northern English musicians, are really funny with their between-song banter. Do you have any idea why that is? The accents? The drinking?

SH: Probably both those things…

GH: There’s something about Scottish and northern English people, that they don’t have the same self-awareness. Quite happy to take a piss out of themselves and be the joke. And I think that’s something that comes across really well in a live show, as well, when you’re chatting in between songs, rather than just thinking that you’re ‘too cool.’

There’s something about Scottish and northern English people, that they don’t have the same self-awareness. Quite happy to take a piss out of themselves and be the joke.

SH: What’s going on over there right now, being a prime example [The Struts playing Samsung Galaxy Stage]. Sounds like there’s some classic rock moves going on over there – and that’s good; everybody seems to be enjoying it – but I think for us, it’s kind of, ‘Look, let’s break this divide. We’re not special; we’re all the same.’ It’s more of a conversational aspect to it, and it’s almost like an embarrassment that we’re even up there in the first place, apologetically.

To me, that inter-song conversation, if you like, helps to bring everyone onto the same level. And like Grant says, making fun of ourselves is something that Scottish people do, often.

QRO: I think it particularly works with your music, because it breaks up the sadness…

SH: I think so. It often shocks people. People have commented, ‘You should try stand-up…’ People are only laughing because they expect me to be miserable…

QRO: What’s it like being a British act playing America during the conventions? Is a little like an American act playing Britain during the Brexit vote?

SH: We have quite a strong tie with U.S. politics. We were in the U.S. on tour, when Obama won the nomination the first time.

QRO: I saw you in Austin at Fun Fun Fun Fest (QRO recap) the weekend after Obama won the election.

GH: We were in L.A. for the election; we were in D.C. for his inauguration. Just real coincidence.

SH: This convention thing is insane. It’s crazy – we were watching it the other night, in the hotel. It’s such an American way of doing things. You book a stadium, an arena, to have Katy Perry play?!? You want to see the British political party conventions? They’re a little grey and dry…

GH: People having cucumber sandwiches and cups of tea…

But it’s an interesting time – you mention Brexit – the political world at the moment is a bit crazy. It’s gone a little bit off-track.

GH: It really has.

QRO: This is your last American date – you’re next in Canada, which has the cool prime minister [Justin Trudeau]…

QRO: They’re saying now, because of Brexit, about another referendum [on Scottish independence]…

GH: I think it might be a little early right now, but it’s something that we didn’t vote for. We voted to remain, quite dramatically in Scotland, so I think there will be a mandate for that. It’ll happen – sooner than most people thought it would.

QRO: With five albums under your belt, how do you balance them all on the set list?

QRO: I saw you in New York (QRO review), and you joked that everyone thinks the second album [2008’s The Midnight Organ Fight] is your first…

SH: They do, and to be honest, that’s fine, because I’m not really an enormous fan of that first record.

GH: Chicago’s probably the only city where that’d go down well in, because our first set of fans were in Chicago, because of that first record.

SH: It was because of the Sound Opinions message board, in the city, that we came here really soon after our first album came out.

But, beyond that, it’s about trying to find a flow and a way of peppering the set. I think we try and load the front-end with the new stuff, and then we can veer off into ‘Hitsville’… [laughs]

GH: Especially the last time we were here, was right after the record came out.

QRO: Because then, you wanted to do the new songs…

GH: You do, but also, people haven’t had the time to live with the new album yet. It’s difficult for them to find…

GH: It’s been long enough that people have really made an effort, I think, to connect with the new stuff.

QRO: How was working with Aaron Dessner (of The National – QRO spotlight on) on the new record, Painting of a Panic Attack?

GH: Aaron has a really analytical and detailed musical mind. One of the most hard-working people I’ve ever met, in our time as a band. In terms of the commitment to the project, it’s unquestionable; he’s incredible.

But, you know, he lives a lot in his own head. Trying to bring out, ‘Where are you going with this?’ We had to kind of build a communication platform.

SH: It was frustrating at times, and difficult at first, to figure out, ‘cause he’s such a strong character, such a brilliant musician & producer. His role was less traditional role of a producer; it was more like an extra member of the band.

GH: He plays a lot on this record.

SH: At the same time, you’ve got to pull that back, and be like, ‘Well, no – this is our record…’ It was just about the relationship, figuring out what it was. Which is with anyone you’re gonna work with, is the case.

SH: Yeah. And, in a good way, he can be quite stubborn, as well, with what his opinion is. That can be good, but can also be detrimental. It took us a while to figure out, ‘No, we need to stand up say, “No, actually…”’

QRO: It’s hard to say disagree with him [on music]…

GH: It’s also us getting over the fact that it’s him, as well, and not being like, ‘That’s Aaron Dessner of The National,’ just be like, ‘That’s the guy who wants to produce our record, who wants to work with us.’ So the relationship has to be equal. That wasn’t anything on his part; it was us as well, you know?

Frightened Rabbit playing “Wish I Was Sober” live at Terminal 5 in New York, NY on May 5th, 2016: