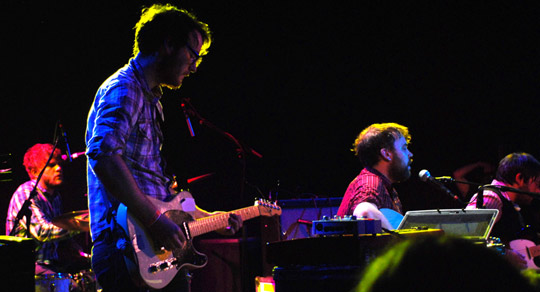 Click here for photos of Frightened Rabbit at 2009 Music Fest NW in Portland, OR

On two studio LPs, Scotland’s Frightened Rabbit have delivered evocative, emotional alt-folk/rock tinged with post-rock gravity.  One wouldn’t think that that would lend itself naturally to a great live show, let alone a funny one, but the foursome proved it could last year with Liver! Lung! FR! (QRO review), a live recording of the band playing their sophomore LP, The Midnight Organ Fight.  And it only intensified on their last date of their U.S. tour, at New York’s (le) Poisson Rouge on Monday, February 2nd, with an all-request show of power and humor.

Billed as an ‘all-acoustic, all-request’ show, Frightened Rabbit really only lived up to the latter – thankfully.  With three of the four members seated, including singer/guitarist Scott Hutchinson, who did play a (plugged-in) acoustic guitar, it was hard to see the band, and this was amplified by the packed house who had clustered at the front (expecting acoustic acoustics), not to mention the too-low stage, coming out of the corner at the not-ideal (le) Poisson Rouge (QRO venue review).  However, the band definitely lived up to the ‘request’ part, playing whatever (of theirs) that the audience asked for, starting with Midnight’s “Backwards Walk”, despite their stated misgivings about beginning a show with such an epic number. 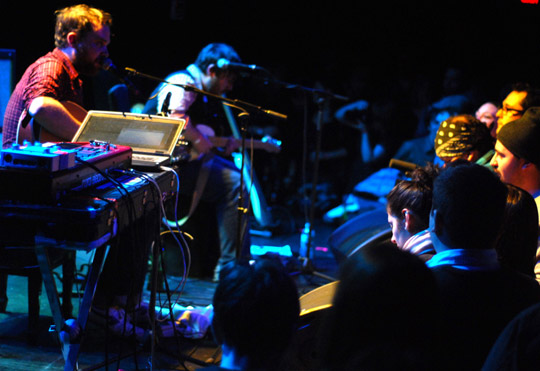 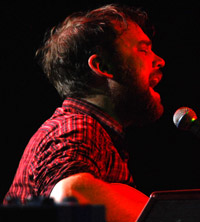 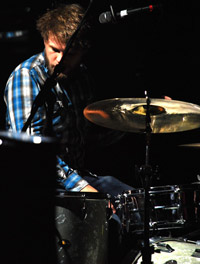 As would be natural at an all-request event, the start of the set was dominated by crowd favorites that a band would usually build up to, like “My Backwards Walk”, the heartfelt “The Twist”, and the pressingly enjoyable “Old Old Fashioned” (the first request Hutchinson actually agreed with).  All of those are from Midnight (and Liver!), and the night was mostly devoted to that (those) 2008 record(s), but 2006’s debut full-length Sing the Greys made itself known as well, such as with “Snake” – the more folksy piece was actually an unsurprising pick to the band, since it was about a snake that goes to New York City (“one of those draft snakes from Ikea – everyone thinks it’s about my penis…”).  Other Greys tracks early on included “Music Now”, where Hutchinson encouraged the crowd to start it with that piece’s title shout, and semi-titular “The Greys”, another one that Hutchinson was particularly excited to sing. 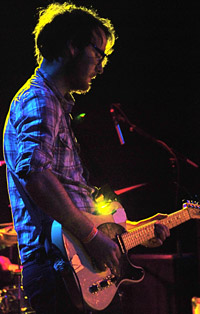 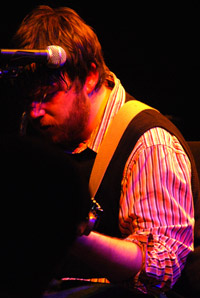 Hutchinson was also impressed by the crowd’s knowledge of Frightened Rabbit’s discography, thanking them for not shouting “Freebird!” or something (which actually occurred right before he thanked them).  He was in a joking mood throughout the show, from saying that he had prepared himself to punish the audience for requests like “Freebird” (“Okay, now you don’t get ‘Floating In the Forth’…”), to remarking that his jeans had worn through at the crotch on this tour and, “In order to be equal, I don’t just want people at the front here to see it…” standing up on his chair and showing off his hole (and black boxer shorts) to everyone.  After Midnight’s “I Feel Better”, he even told the crowd that it was a ‘sequel’ to “Snake” – because he didn’t have enough ideas for songs, so took the chorus from “Snake” and put it in “Better”.  Hutchinson followed that up by giving the story behind “Snake”, of going to New York to surprise someone with nothing but a draft snake, not even clothes (“Well, I had the clothes on my back”), the person being less-than-thrilled, and so Hutchinson had to go back on a plane to Scotland with “My tail between my legs – my snake between my legs…”

“Better” brought Frightened Rabbit back to Midnight, following it up with an especially strong rendition of “Good Arms vs. Bad Arms”, record opener (on Liver! as well) “The Modern Leper”, and the memorable “Heads Roll Off”.  Along with the subsequent “Go-Go-Girls” from Greys – the crowd demanded that the band go higher after the uplifting “Heads”, and “Go-Go” was about the only song they had that could do that – and Midnight (/Liver!) standout “Keep Yourself Warm”, this all formed the high point of the set.  Hutchinson had been able to manage the night’s flow a bit, picking which of the first titles shouted that he heard, thus letting him keep “Yourself Warm” until later on.  The grand track’s line of “I’m drunk / I’m drunk / And you’re probably on pills” was a natural sing-a-long by the audience, and Hutchinson took advantage of that by later getting everyone to sing the chorus lines – even mock-introducing them by faux-asking, “Where won’t you find love?” before chorus line, “Won’t find love in our home”, and “What does it take to find love?” before “It takes more than fuckin’ someone to keep yourself warm”.

Throughout the set, Hutchinson had also joked that they’d get to every request, since they only knew so many songs, and while they did leave a few out, Frightened Rabbit were grasping a little near the end.  Greys’ “Be Less Rude” didn’t quite fit the feel of the night, but the band followed that up with a cover of The National’s (QRO live review) excellent “Fake Empire” (from 2007’s Boxer – QRO review) – well, half a cover, really, since Hutchinson admitted he didn’t know the whole song, so he offered to segue from “Empire” into something else, and when “It’s Christmas So We’ll Stop” was offered, he took it up, as it was in the same key.  That segue wasn’t perfect, but did bring about laughter. 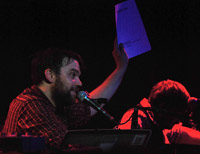 Frightened Rabbit closed on the reverberating “Floating In the Forth”, a track they had specifically held in reserve until the end, and after a rather long encore break (many left the tight pack at that point, and there had been a trickle throughout the show) they returned with “Set Yourself Free” from Manchester’s N-Trance (from the second volume of the Guilt By Association series).  However, those were really the only two ‘set’ pieces on the night – Hutchinson even joked that they had ‘souvenir set lists’, then held up a blank piece of paper.  But it was a souvenir show, and a great way to close out any tour. 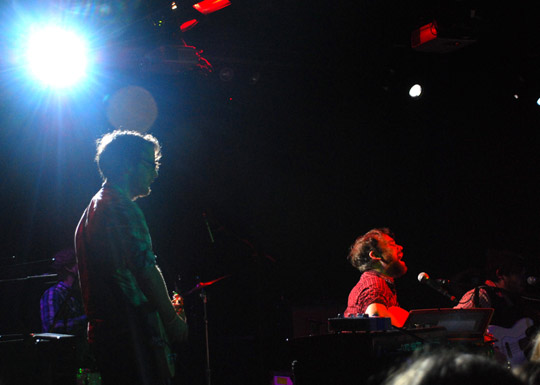