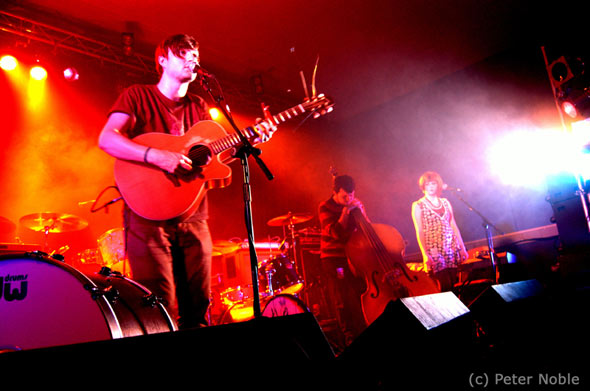 Hailing from Glasgow, Admiral Fallow are normally a six-piece, but at Ansom Rooms in Bristol, U.K. on Saturday, November 20th, the Scottish troop were going to face the Bristol foe with a fabulous five as the drummer (not for the first time in Bristol) hadn’t turned up… maybe he knew how hard it was to please a Bristol crowd?  Lead singer and guitarist Louis Abbott offered a feasible explanation in that, Philip Hague clearly didn’t like Bristol. 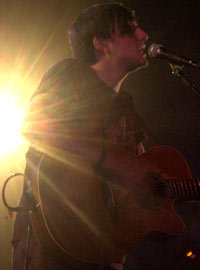 Admiral Fallow are also made up of Kevin Brolly on clarinet and piano; Sarah Haynes with backing vocals, flute and piano; Joseph Rattray on upright bass and Tom Stearn on guitar.

Abbott addressed the audience.  “We are Mumford and Sons (QRO photos)… I wish,” muttered Abbott.  Thanked your lucky stars they weren’t.  You see, Admiral Fallow create well-crafted songs that are held together by Abbott’s fantastic voice, which appears to offer something far more genuine.

The pace soon picked up with “These Barren Years”, an early single for the band.  Rattray kept the rhythm section going with his upright bass, Hayne’s backing vocals adding the depth and Stearn enjoying the freedom with his semi-hollow belly guitar to let rip.  “Dead Against Smoking” started with Brolly’s spellbinding clarinet and the crowd is hooked.  As Abbott sang the words, “We’re young, we’re having some lovely times,” it did feel like the audience in the Bristol Anson Rooms were having one of those times. 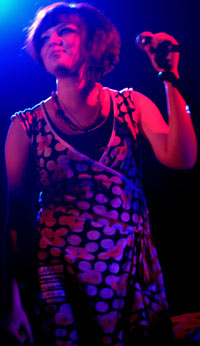 Abbott encouraged the audience to listen to their début album, Boots Met My Face.  This is a gem that should not be kept a Scottish secret.  When they asked, “Who had the album?”  A couple of people made it known they did.  To which, Abbott promptly thanked his parents and moved on.

The lead singer asked if everyone was looking forward to seeing Frightened Rabbits?  A cheer went up to which Abbott suggested was pitiful, and encouraged a much louder emphatic response.

Next came “Subutteo”, which as far as songs go about the great ‘flicking game’ is not quite up there with Half Man Half Biscuit’s classic about dodgy transformers and Dukla Prague away kits, but it’s still a good insight into how the band spent their youth when they weren’t in their rooms learning their instruments.

Abbott announced that they had saved their best for last, as they hadn’t expected anyone to arrive until the end of the set.  Admiral Fallow launched into “Squealing Pigs”, which blistered along and the audience picked up and danced.  The band giggled with glee and lead singers grin said it all.  Abbott sang “Will you remember me in a year?”  Well judging by the response tonight, that is an emphatic yes and with further dates up and down the country, should see an increase in this bands following.  A popular warm up band for the ‘Rabbits’ and will have no doubt gained themselves hopefully many more fans.  They lacked possibly some confidence, but this vulnerability somehow leant itself to their songs.

Meanwhile Bristol will no doubt look forward to seeing Philip the drummer next time… “I’ve heard.  Kills men by the hundreds.  And if he were here, he’d consume the English with fireballs from his eyes, and bolts of lightning from his arse” (Braveheart quote) 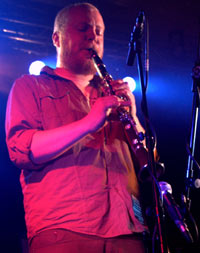 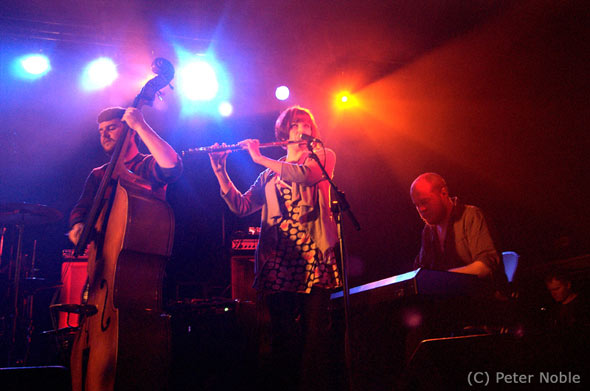 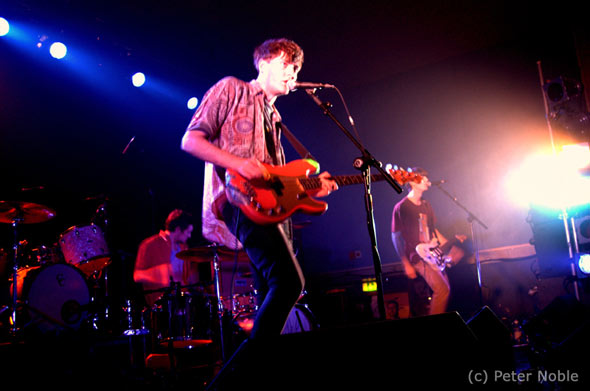 The hall reverberated to the sound and the frequency of what sounded like an armada of space ships landing with an impending alien invasion.  What came next seemed to pretty much take the growing audience by surprise, but never the less intrigued they were caught under the spell of ‘The Neat’.

On strutted four lads from Hull who meant business and had the intention of taking no prisoners with their wall of sound.  They are Merrick ‘Mez’ Green on vocals and bass guitar, Laurence Etheridge and Nick Boden on guitars, and Richard Lorimer on drums.  [note: the latter, from what I understand, is a Hull City fan, which as a Bristol City fan, who witnessed his beloved Bristol City missing out on a place with English football elite due to a moment of brilliance by an OAP called Windass, I shall remain professional and impartial]

Floppy haired guitarist Boden had an abundance of pedals and effects in front of him, which he gleefully knocked around spitting out all manner of sounds that cut through the air piercing our eardrums.  When this hyperactive upstart wasn’t playing with his gadgets he was leaping around swirling his guitar everywhere making it nigh on impossible to capture this rare specimen from “The Humber” on camera.

Frontman Mez immediately came across as the bastard child of The Fall’s Mark E. Smith, except this one was in your face and actually appeared on stage rather than grumpy old Mr Smith’s antics of growling off stage or just being an obnoxious awkward sod.  There is clearly a strong ‘Fall’ influence – many other reviews suggest the same.  However, how refreshing to hear a British band, who are trying to brake away from all the ‘twee’ bands who want to sound like Vampire Weekend (QRO live review), Foals (QRO live review) and Bombay Push Bike or whatever they are called.

Still trying to fathom how these chaps landed a filling slot between Admiral Fallow and the Frightened Rabbits, but the boys continued to give it whether the paying punters wanted it or not, relentlessly working through their eight-song set, giving it their all despite a muted response from the gathered audience.  Green announced “Hips” as their next single, which would be available from the 29 November and is available to preview on the bands MySpace webpage.

When asked about the possible ‘Fall’ influence afterwards, Green did say it was a band they appreciated and once supported.  When asked sympathetically and with concern for them, “How was the charming Mr Smith?”  Green replied with a slight hesitation… and then a wry smile, “He was a bit of a dick.”  Mr. Smith would have been delighted with such a response… Hull 4 Twee Indie Pop 0 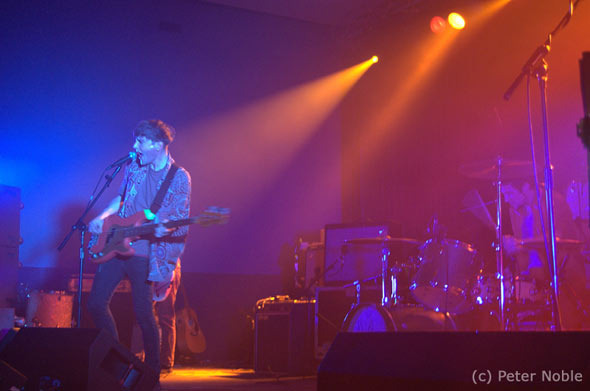 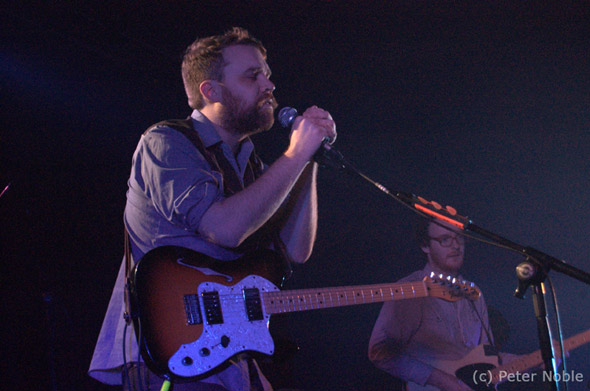 Click here for photos of Frightened Rabbit at Paradise in Boston, MA on October 29th, 2010 in the QRO Concert Photo Gallery

Click here for photos of Frightened Rabbit at 2010 Haldern Pop Festival in Rees-Haldern, Germany in the QRO Concert Photo Gallery

Click here for photos of Frightened Rabbit at Music Box in Los Angeles, CA on May 23rd, 2010 in the QRO Concert Photo Gallery

Click here for photos of Frightened Rabbit at 2009 Music Fest NW in Portland, OR in the QRO Concert Photo Gallery

Click here for photos of Frightened Rabbit at 2009 Pitchfork Festival in Chicago, IL in the QRO Concert Photo Gallery

Click here for photos of Frightened Rabbit at 2009 Siren Music Festival on Coney Island in Brooklyn, NY in the QRO Concert Photo Gallery

From the off/on this cold Saturday night the audience were up for an evening to enjoy and so were the band, with this being the first date of their U.K. tour, although the band had been touring much of Europe and the U.S. previously.  The group entered to a very un-Bristol like enthusiastic reception; tonight they already had converts who gave their heroes a deafening and enthusiastic welcome.

“Things” from the latest album The Winter of Mixed Drinks (QRO review) started the show with Hutchinson beating a hypnotic rhythm that warned us, this was the calm before the storm.  “The Modern Leper” rose and rose.  Frightened Rabbit have a massive all engulfing sound on their studio albums and each member of the band were replicating this immense sound tonight.  Kennedy and Monaghan totally transfixed on the job in hand and taking it in turns on either keyboard or guitar.

Another offering from the latest album came in “Nothing Like You”, which raced along at speed and defied the audience to try and stand still to the song.  What resulted was a gleeful hall dancing their Saturday night away.  This is a band that just writes catchy songs for fun and the world should listen.

“Old Old Fashioned” brought the biggest roar of the night so far from the crowd, who in turn sang along with Hutchinson.  This was followed by “Head Rolls Off” from the second album The Midnight Organ Fight, before slowing things down with “Not Miserable” with Skene beating an individual drum as the song unravelled itself to closure, under the darkened red lighting.  “I Feel Better” certainly had that highlands sound echoing from the guitars and (at the time) had the slight feel of that post-punk band The Skids, who also hailed from Scotland. [note: however, upon listening to the track at home, I may have been mistaken.  If the band takes that as a compliment, then let’s say I was right]

An impressive long ‘pitch perfect’ whistle came from the audience between songs, which didn’t go unnoticed by Hutchinson who asked for the mystery whistler to identify themselves.  The lead singer then acknowledges and paid respect to the talented whistler.  Hutchinson suggested they had obviously spent some of their wasted youth; whistling randomly at people to perfect such a sound, where as he had spent his time learning the guitar.  However, as Hutchinson went on to confess, “But somehow I envy you tonight.”

The ridiculously very catchy “Swim Until You Can’t See Land” was excellent and reinforced why it was a single about a year ago and one of the ‘Rabbits’ most popular songs to date and constantly being played on my MP3 player.  Hutchinson played guitar on his own during the night a couple of times, as the singer was once the only member of Frightened Rabbit, before its ranks began to swell.  Each time he had the audience transfixed and fully taking in each word of the message Hutchinson had to offer.  As if to bring the message home to those congregated the bard got as close to the edge of the stage.  Arms raised and clapping in time to the song ensued from the audience who lapped up each note.  “Keep Yourself Warm” finished the set with its pretty straight forward hard hitting lyrics that certainly suggest Hutchinson is not one to mince his words and keep a message clouded in mystery.  Hutchinson shared with everyone that today was his birthday and to keep this special party going the next track would be “The Twist”, which certainly seemed to meet with the approval of the audience.

Hutchinson thanked Admiral Fallow and The Neat for joining them on tour with the latter getting a slighted more muted applause… like they cared… they were off to prepare their invasion of another unsuspecting town!

Frightened Rabbit finished with “The Loneliness and the Scream”, whose lyrics looked to nicely wrap both band an audience in a common “communal heart.”  The audience joined in with the crescendo making it a truly memorable night and one everyone seemed to really enjoy, confirming FR as one of the finest live acts around at the moment.

Frightened Rabbit were really tight; their music is full of hope and sweeps you up with its emotion charged melodies.  They have a massive sound on their studio recordings, but they perfectly manage to replicate this within their live shows.  They could easy manage to carry their sound into massive arenas, as their music is catchy and beautifully woven, with well-scripted lyrics from the impressive songwriter Hutchinson.  However, it is the immense sound that almost transforms these songs into anthems that really suggests the band is on the verge of real commercial success if they choose. 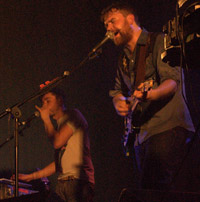