<img src="http://www.qromag.com/wp-content/uploads/2010/06/frogeyespaulstombatriumph.jpg" alt=" " />Canadian indie also-ran Frog Eyes manages to be both a wanna-be and way too full of itself on an album that never gets better than... 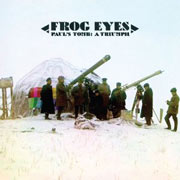 If there’s a strain in the Canadian indie-rock of this new millennium, it is that all seems to have been forged in secret, removed from the pressures of the American & British markets, whether major labels or internet scrutiny.  Of course, that’s produced very different things, from the pop-friendly epic Broken Social Scene (QRO spotlight on) to the much more singular and idiosyncratic Wolf Parade (QRO live review).  Both of those acts have found success in the rest of the English-speaking world, proving that one doesn’t need the record industry pressure cooker to make widely enjoyable music.  But in the same way, not having it doesn’t ensure something enjoyable – or even good – will come.  Just look at Canadian indie-rock also-ran Casey Mercer’s Frog Eyes, who have put together a tiresome, indulgent, up-down, stop-start album in Paul’s Tomb: A Triumph, which manages to be both a wanna-be and way too full of itself.

One-half of the songwriting behind Wolf Parade is Spencer Krug, who has his own band in Sunset Rubdown (QRO live review), which has managed to be even more unique, yet still accessible & even enjoyable, more (QRO album review) or less (QRO album review).  Once upon a time, Krug formed a Canadian ‘super-group’ with Dan Bejar (of Destroyer, The New Pornographers) and Mercer in Swan Lake for Beast Moans (QRO review), but while Bejar has managed to be the more reclusive artiste ‘George Harrison’ of The New Pornographers (QRO live review), Mercer seems to have out-done Krug in being idiosyncratic – but without the imagination.  2007’s Tears of the Valedictorian (QRO review) had scrambled beats & undistorted, jumpy guitar & vocals to make a remarkable sound, but that was all it had, set on repeat (of course, the same could be said about Krug’s somewhat diminishing Sunset Rubdown returns…).  But the worst thing about Tears, its repetitiveness, is, in a way, the best thing about Paul’s Tomb: that it all sounds the same means that you’re at least a little inured to it by the end.

Paul’s Tomb kicks off with the nine minute-plus "A Flower In a Glove", an up-down, stop-start ‘rock’ with Mercer’s yell/bellow vocals – but at least you can’t say you weren’t misled by the opener, as that’s the same story for pretty much the entire record.  The following "The Sensitive Girls" does get better, even reaching decent with a poor man’s Sunset Rubdown chorus (though Mercer’s vocals are still an obvious weak point), but that’s the (relative) high point.  Perhaps trying to go for the epic guitar rock odysseys of the seventies, instead Frog Eyes just sounds aggressively meandering (two minute Spanish guitar & strum instrumental "Lear, in the Park" is a relief, of sorts, but quickly forgotten).  The seven-and-a-half minute "Styled By Dr. Roberts" (weird song titles like that also evoke Sunset Rubdown…) wants to be, and thinks it is, important, but by the time of the slow drums & guitar instrumental, it feels like the drummer has lost energy & interest in the song, and is reduced to going through the half-motions while he waits for the guitarist to finish his chaotic wankery/trying to tell the guitarist to hurry up and finish (note: still three minutes left in the song at that point).  By the back third, "Lear in Love" and the title track are thankfully forgettable at this point, and Mercer’s attempt at being haunting with echoes in between, "Violent Psalms", is more laughable than offensive, thanks to his overwrought vocals (adding a female back-up doesn’t fix things).

Comparing Frog Eyes to Sunset Rubdown may seem trite and just based on Mercer & Krug’s past association, but it’s done because Sunset Rubdown is the closest good music to Frog Eyes; what Krug manages to do right, Mercer does wrong.  After a while, you get used to it to some degree, but that’s hardly what music is supposed to be.  The nauseating, unlikable Paul’s Tomb: A Triumph isn’t even worth the obvious ‘Paul’s Tomb: anything but A Triumph’ insult or the like.