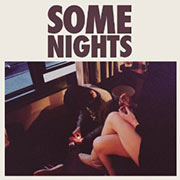 Despite having a dumb name, these guys do exhibit tendencies that are… fun.  Not too fun, but fun nonetheless.  That will be a pun that will get completely overused.

This New York band has a few things going for them: namely, having their song “We Are Young” featured on Glee.  Their songs are catchy, but they wouldn’t be anywhere near where they are if it weren’t for that helpful boost.  Also, their lead singer has a really high voice.  Suppose it’s only natural they would have gotten some attention for that at some point.

There’s a reason why “We Were Young” is the album’s lead single and why it was the pick to be featured on Glee: it’s the best song on the album.  These guys’ sophomore album Some Nights unfortunately falls prey to the epidemic going on in the music industry where the lead single is the only worthwhile track on an album (with the exception of the title track).  The rest of the songs on Some Nights are good for a listen or two, but are ultimately forgettable.  Listeners would have to work pretty hard to make them stick, which is a problem if a band wants to last.

The last thing worth mentioning is their somewhat original sound, at least when compared with many of the other acts in today’s music scene.  But even then they really can’t be given full credit for it.  However, the gentlemen from Queen can because fun. completely ripped it off.

The prediction here is that “We Are Young” will continue to get a considerable amount of radio airplay, Some Nights will churn out another moderately-popular single, the band will play some festivals, and then they will record another album that will flop when compared to the mediocre success of this one.  It’s the all-to sad-but-true story we often see in the music community.  So enjoy it while you can.

Pop Will Eat Itself : Live