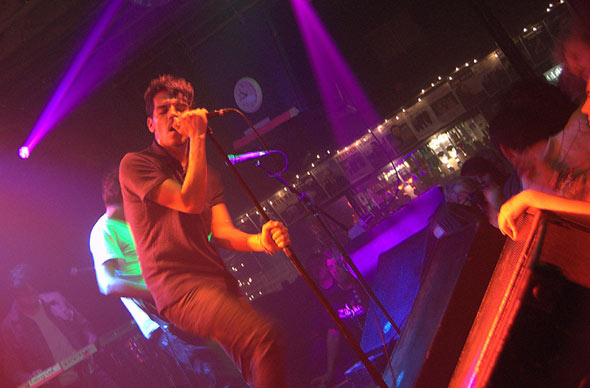 The Peppermint Hunting Lodge came on stage on Tuesday, January 25th at Bristol’s The Fleece early, so only had the opportunity to play to those who had arrived early.  TPHL had made the short journey from the Forest of Dean in Gloucestershire, the same place that once brought us EMF.  They are a tempestuously spirited sextet of Dan Charles lead singer, James Camp on keyboards, Richard ‘Dobbins’ Robbins on bass guitar, Paul Gore on drums and Dave Charles and Simon ‘Gorey’ Gore on guitars.  The band have a loyal local following having 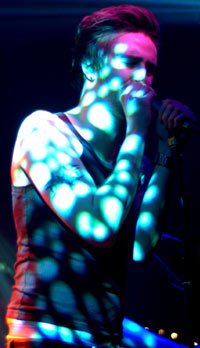 played the local West Country circuit, but have also played several other U.K. towns, including support slots with Pulled Apart by Horses, The Automatic, and The Rifles.

From the start TPHL were relentless, in-your-face and full of energy throughout the band.  At times it felt the small stage at The Fleece would shackle them.  Not so, with Dan taking the time to join those on the floor in front of the stage dancing as their huge sound spilt into every crevice of the stone floor venue.  TPHL put in a good set with Gorey playing a rock style guitar, and his fellow ‘axe God’ Dave Charles went one better as at one point he began playing his guitar with a violin/cello bow.  All of this creativity was hemmed in together with Camp pounding away on his keyboards.  The sound was frenetic with a rock/indie sound/vocals but danceable possibly hinting at a Klaxons (QRO album review) influence.

TPHL have a new recording out in February available on iTunes, etc. – Kill a Tiger or Die Trying, which has been set down with Tom Woodhead (Forward Russia) at the helm and was mastered by Tim Turan (Turan Audio).

Next up were the Flashguns from London.  They are Sam Johnston on guitar/vocals, Olly Scanlon on bass/vocals and Giles Robinson on drums.  The trio kicked off with "No Point In Hanging Around", which is due for release as a single in June.  It’s a well-crafted number with Johnson wielding his guitar around and Scanlon on backing vocals. 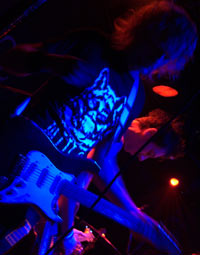 across the U.K., but also including support slots with The Bombay Bicycle Club.  Flashguns have their long awaited début album Passions of a Different Kind, set for release in June.  Many of the pending tracks from this album were showcased in the set and were very well received by the audience in the venue, which by this time was filling up.  The band was confident and well drilled throughout, playing a faultless set with impressive vocals from Johnson and a tight rhythm section from Scanlon and Robinson, who found himself squeezed behind his kit on the small stage of The Fleece.

Next came "Passions of a Different Kind", which is due for release in March, and "Come and See the Lights", a single that the band released late last year.  The latter was a cracking gem of a song, which hopefully promises great things from the album with impressive thumping drums though out.  Johnson yelled, "Come and see the lights," but 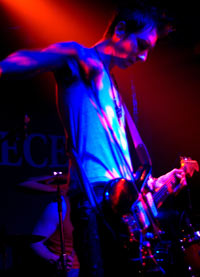 first before you do – make sure you take in the Flashguns in a town near you.

Click here for photos of Funeral Party at La Zona Rosa in Austin, TX on November 11th, 2011 in the QRO Concert Photo Gallery

Enter the main act from Los Angeles, California, a band that are making big waves with their up-tempo jangly, disco funky music.  Funeral Party (named after The Cure song) have just released their début album The Golden Age of Knowhere, and they were in the U.K. to have a great time as lead singer Chad Elliott proclaimed early on to the now packed sold out crowd in The Fleece.

In a recent review by the NME on the band, they suggest that Funeral Party are "annoying for its try-hard, ‘please play us at the disco’ stylings."  Well tonight, yes the boys were indeed working hard, but they put on an entertaining show, 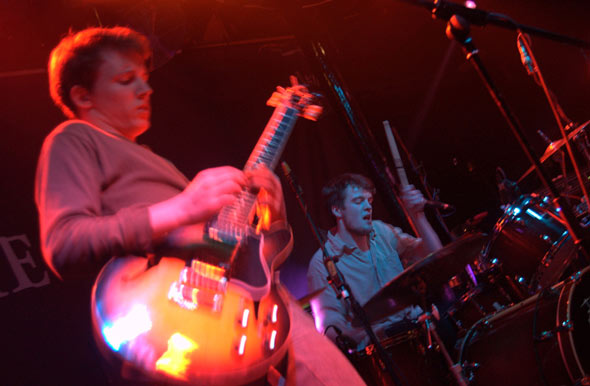 which the mainly late teens/early twenties crowd lapped up.  It was just great fun with Elliott diving into the audience so not to miss out on the crowd surfing, which members of the audience were carrying out on a regular basis.

James Torrres (guitarist) throughout drove the band forward with the effects from his guitar and through the night remaining totally professional, even when stopped by a drunken lad from the audience who didn’t seem to want to let go of Torres hand until he had managed to communicate his mumblings to the still smiling guitarist.  By the second song, "Giant", the party was well and truly under way with drummer Robert Shaffer drumming moving things along at a frenetic pace, and held together by Kimo Kauhola’s throbbing base lines and the percussion and keyboards from Tim Madrid.  Kauhola impressed throughout the evening and again in "Car Wars", the West Coast funkster causing chaos in the audience as his bass created some kind of spell across the small venue, making it impossible for the crowd to avoid ‘getting on down’ to the L.A. Sound.

"Postcards of Persuasion", one of Funeral Party’s early songs and from the new album, was met with intensity as Elliott reached over into the audience singing another bitter sweet song from their catalogue, before jumping on top of Shaffer’s drum kit and bouncing off backwards back to terra firma.  "Relics and Ruins" brought a bit of rest bite with Elliott this time taking his place behind a keyboard.  Almost anthem-like "Finale" saw chaos resume with Elliott again holding his mike to the audience as they chanted the lyrics, "We are the voices under the tracks / Drawing you forward / Pushing you back", 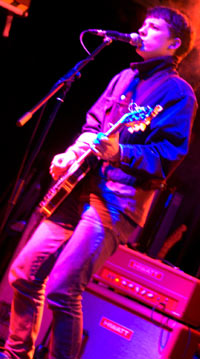 which the lead singer again thanked the Bristol audience for being there and making the evening a good one.

The final song of the evening was the one the audience had been waiting for.  Tim Madrid’s keyboards on its own eased us into "New York City Moves To the L.A. Sound", to then be joined by some percussion from Shaffer.  James Torrres guitar wa-wa pedals were in overload now as Elliott screaming the lyrics suggesting New York pinches music from other cities, resulting in the singer on his knees collapsing in front of his drummer in a heap at it’s finale.

The Bristol audience left the venue realising how lucky they had been to see a band like Funeral Party at such a small venue, because if tonight was anything to go by, the boys from will be playing in much bigger venues.  No doubt it will only be a matter of time before New York City will come looking to pinch another idea or two from this L.A. sound.

100% effort, entertainment and fun.  Go and see for yourself. 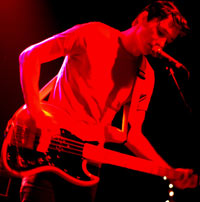