On a sleepy Tuesday night in the biggest city in the Southeast, Atlanta was ready for Future Islands.... 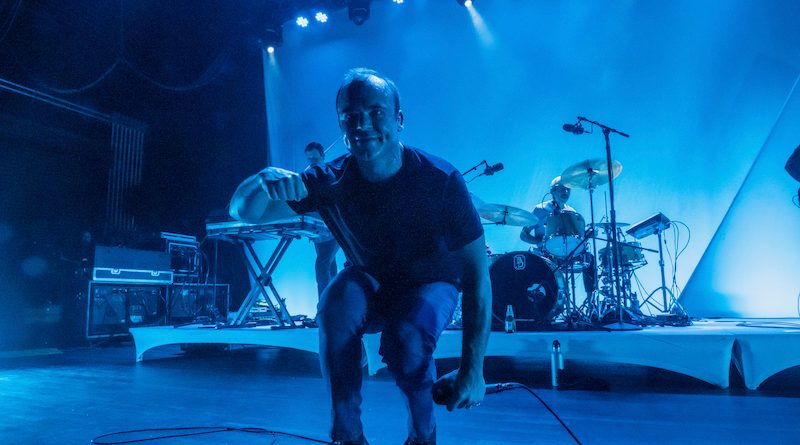 Click here for photos of Future Islands at The Fillmore in San Francisco, CA on September 4th, 2021 in the QRO Concert Photo Gallery

Click here for photos of Future Islands at 2016 Float Fest in San Marcos, TX in the QRO Concert Photo Gallery

Click here for photos of Future Islands at 2015 Governors Ball in New York, NY in the QRO Concert Photo Gallery

Click here for photos of Future Islands at SXSW 2015 in Austin, TX in the QRO Concert Photo Gallery

Click here for photos of Future Islands at 2014 Boston Calling in Boston, MA in the QRO Concert Photo Gallery

Click here for photos of Future Islands at 2014 Music Fest NW in Portland, OR in the QRO Concert Photo Gallery

Click here for photos of Future Islands at Schokoladen in Berlin, Germany on August 10th, 2012 in the QRO Concert Photo Gallery

Future Islands has become one of my favorite bands in the past few years, though I’ve never seen them live. I knew nothing of their onstage performance, but I hoped for the best – and they did not disappoint. In fact, they blew my mind, in the best possible way, when they played Buckhead Theatre in Atlanta on Tuesday, October 12th.

The venue was completely appropriate for the show – intimate, but not tiny. The crowd was excited before the show began, in anticipation of their band’s performance, as though they knew how good they were about to get it.

The lighting was a bit minimal and somewhat basic, but was enough to do the job of showcasing their performance. Then the lights went out and the band casually took the stage in the darkness, stepping in front of their instruments. Singer Samuel Herring, (AKA: Hemlock Ernst) walked on stage in such a relaxed way, it was as if an old schoolmate had just walked into your classroom after recess to greet you.

However, as soon as the music started, a new persona came out in full force. Herring feels his music in such a personal – almost spiritual – way, he seems to fall into a deep trance as he performs in front of an audience. The audience reciprocated the feeling by singing along with him, as his body and mind poured out of him, into the audience, like bourbon into a perfect
“Manhattan” cocktail.

For the most part, the rest of the band, based in the Baltimore area, kept a pretty low profile, creating an intimate conversation with their instruments, while Herring played the role of front man. Keyboardist Gerrit Welmers was on double duty, filling in the spaces where a guitar would normally be, while bathing the “ear waves” with contagious synthesizer modulations, elegantly crafted to fit each song. Bass player William Cashion perfectly created the lively pulse of the band’s sound, while drummer Michael Lowry kept the heartbeat of Future Islands alive and kicking. In combination, the drums and bass created an elegant communion that became the foundation of their music.

The resonance emitting from the keyboard sprinkled the songs the way cook seasons a perfect dish. I was a bit disappointed at the beginning, when I noticed that Cashion didn’t appear as animated as I thought he should be, but I quickly realized that he doesn’t have to be. His instrument is all the animation the audience needs – and more.

Singer Samuel Herring brings a combination of punk, hard rock, pop and soul to his voice, giving the band true musical diversity. He could as easily perform in a death metal band or a gospel group. His voice carries a multiplicity of tones and styles – and he knows how to use it. As a member of the audience, one could feel his lyrics so clearly, it was as if he was talking directly to you. His physical performance was an experience to see and feel. At times, he came at one like he’s about to physically strike you, not unlike a Silverback defending his territory as he pounds his chest with incredible male energy. At other times, he had a very sensual, almost feminine way to move his body, displaying a kind of sexual energy, with a mixture of Michael Stipe and Iggy Pop. Whatever his movements, they all set the perfect scene for every song.

Future Islands is a well-seasoned band with 15-plus years of experience – and it shows. Their dedication, love and respect for their fans during their performance really came across. A band becoming one with their audience can only be achieved with powerful material and years on the road. Years of loving their fans and their fans loving them back.

On a sleepy Tuesday night in the biggest city in the Southeast, Atlanta was ready for Future Islands. Not too surprising, since the band has some southern roots in their origins, with several band members originally hailing from North Carolina.

Future Islands has an incredibly diverse sound and attracts a diverse crowd. A person who grew-up in the late ‘70s punk era, or the ‘80s new wave era, or even the alt-rock era of the ‘90s, could each completely relate to their music. The group creates a perfect bridge to the past, present and future. Atlanta got a treat on this National Indigenous Day, with and a bold and all-encompassing set created from their many years of material.

Future Islands is an incredibly talented band lead by the always charismatic Herring – a “bull in a china shop” in the best possible way. He’s someone who’s not afraid to undress his feelings and emotions onstage, as though he’s performing a soul purification ritual – purifying himself and his adoring audience.