Garbage : Not Your Kind of People

<img src="http://www.qromag.com/wp-content/uploads/2012/07/garbagenotyourkindofpeople.jpg" alt="Garbage : Not Your Kind of People" /><br /> Garbage are back, and it's the Garbage that was, if not quite as good or bad as the... 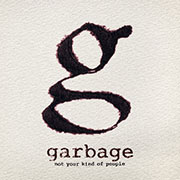 Back in the mid-nineties, just as alternative music was moving from being the ‘fresh new thing’ to getting established on the radio/charts/MTV, Garbage came out of Madison, Wisconsin, featuring auburn-haired songstress Shirley Manson on vocals and Nevermind producer Butch Vig on drums.  Eschewing grunge for electro-rock tinged with darkness, the group was near-immediately launched into success on the back of such singles as “Only Happy When It Rains” and “I Think I’m Paranoid”.  By the end of the decade/century/millennium, they’d done the theme songs to movies Romeo + Juliet and James Bond’s The World Is Not Enough, headlined the concert at the opening of the Scottish Parliament (though only Manson is Scottish), sued to leave one major label to join another, and more.  In short, they stopped being ‘alternative’ (if they ever were) and got massive – and you lost interest (releasing an album just after 9/11 didn’t help…).  The group nearly broke up, went on “indefinite hiatus,” Manson joined the cast of FOX’s Terminator: The Sarah Connor Chronicles, Vig went back to producing the likes of Green Day (QRO album review) and Foo Fighters (QRO album review), and it all seemed done.

Click here for photos of Garbage at Fox Theater in Oakland, CA on October 7th, 2015 in the QRO Concert Photo Gallery

Click here for photos of Garbage at La Zona Rosa in Austin, TX on October 10th, 2012 in the QRO Concert Photo Gallery

Click here for photos of Garbage at 2012 Osheaga Music Festival in Montreal, PQ, Canada in the QRO Concert Photo Gallery

Well, Garbage are back with Not Your Kind of People, and it’s the Garbage that was, if not quite as good or bad as the Garbage you remember.

Unfortunately, the worst of the Garbage you remember comes out in the record’s opener, “Automatic Systematic Habit”, cheesy, self-righteous electro-rock that you’d look down upon whoever it came from.  But then things get better with the following “Big Bright World”, and reach to the best of the Garbage you remember on third track (and ultra-wise choice for first single) “Blood For Poppies”, with the kind of hook that once made you think you’re paranoid (or even “Queer”…).

None of the rest of People reaches either those highs or those lows.  The group can still be a little self-righteous to the point of torch songs (“Not Your Kind of People”), but also more pressing and adventuring (“Felt”, “Man On a Wire”).  And you can’t say Manson still can’t pull off being a tragic vixen (“Sugar”).  Not Your Kind of People is not as good as you remember from when you loved Garbage, or as bad as you remember when you discarded them, but Garbage is still a memorable band.