Whoever coined the aphorism, “Rock is dead,” would have gotten a large bucket of cold, icy water to the face at Gary Clark Jr.’s Austin City Limits taping.... 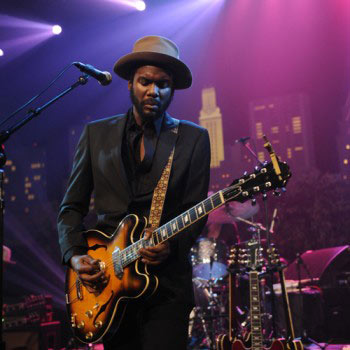 He’s as smooth as Marvin Gaye, bluesy as Robert Johnson, and timeless as Jimi Hendrix.  He’s Gary Clark Jr.  And whoever coined the aphorism, “Rock is dead,” would have gotten a large bucket of cold, icy water to the face at Gary Clark Jr.’s Austin City Limits taping on Friday, November 30th.

His two-hour set was a testament to how a simple combo of two guitars, drums, and bass is not only the foreground of American music but of good music in general.  Reinvigorating the timelessness of the blues, Gary Clark Jr. takes the blues as his outline and adds flourishes of hip-hop, funk, psychedelia, and soul, morphing the song into a musical magnum opus.

Gary Clark Jr. is an intriguing musician – while he’s clearly received the recognition and fame of any rock star, he’s hasn’t fully adjusted to that mold.  Donning his rail-thin frame with a black blazer, fedora, and black denim, he could have easily been mistaken for some ladies man in a GQ spread.  His screeching guitar solos and smooth falsetto radiated with an alluring confidence, but his quiet and cute charisma alluded to some shy, pre-pubescent teenager, finding consolation with his six-string.

Chock-filled with buzzing guitar riffs, burbling bass lines, and thunderous drums, Clark Jr.’s set would have been ear candy to any blues revivalist.  The blues savior spearheaded his set with “When My Train Pulls In”, as the audience boarded a southbound train set straight to the hell.

“This song is about one of my ex-girlfriends,” quipped Clark Jr. as he quickly began the staple plucking riff to “Don’t Owe You a Thang”.  The rambling guitar plucks strolled like rolling stones as they bounced to the energetic beat of the bass drum and hi hat.

During his set he reimagined his catalogue of songs from his debut album, Blak and Blu, and transformed them into galvanizing anthems.  In his bedroom eyes drug, “Please Come Home”, his charming falsetto lightly coated the ‘50s ballad melody.  R&B aphrodisiac “Things Are Changin’” sounded like the soulful Spinner’s classic, “I’ll Be Around”, as slippery smooth guitar chords and seductive timbres languidly reverberated in the venue.  He later dumped the Casanova charm in the revved up “Travis County”, as his guitar wailed and moaned in what seemed to be like a reimagined version of Chuck Berry’s “Johnny B. Goode”.

The latter part of Clark’s set culminated into a hellish soundscape of filthy and buzzing guitar riffs and clarions of snares and cymbals.  “It’s going to get a little crazy from now on,” said the blues virtuoso as he transformed into a warlock, yielding his weaponry of metallic six strings.  The audience stood with mouths agape as the signature guitar buzz segued way into the barbaric, “Numb”.  His feral stage presence mixed with his impeachable guitar skills climaxed into an infernal electric spectacle that could only be compared to the likes of Prince or Jack White.  The highlight of the night was his impressive tribute to Jimi Hendrix’s psychedelic trip “Third Stone from the Sun”, where Clark Jr. concocted a groovy hip-hop scratch solo before charging back into the heavy riff.

He ended his first set with an intimate and dark version of “Blak and Blu” that served as an intro into the crowd pleaser, “Bright Lights”.  After a raucous amount of applause, Gary Clark Jr. came back up for an encore to end the night with the slow distorted waltz of “You Saved Me”.  His honey smooth cadence trickled down the distorted melodies, coaxing the war between juxtaposing sounds of devilish “wah” guitar solos and starry- eyed synths.

Gary Clark Jr. just might be rock and blues savior.  But only if he escapes the shadows of other blues guitarists, like Jimi Hendrix and Howlin’ Wolf, will he be able to champion his craft and facilitate the blues’ path into mainstream ubiquity.  But unlike his influences, Gary Clark Jr. seems unfazed to conform to the virtues of ‘sex, drugs, and rock ‘n’ roll.’  As long as Gary Clark Jr. is here, the blues is here to stay.