What better way to start Spring Break than a music festival in your own backyard? Thankfully, Gasparilla Music Festival (GMF) in Tampa, Florida has this covered.... 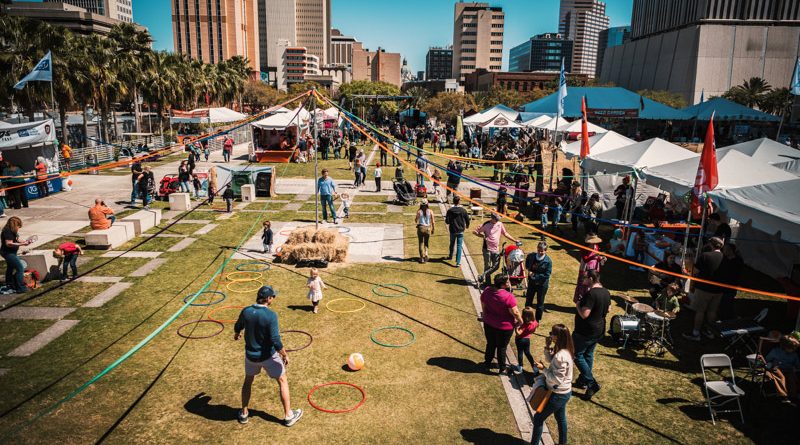 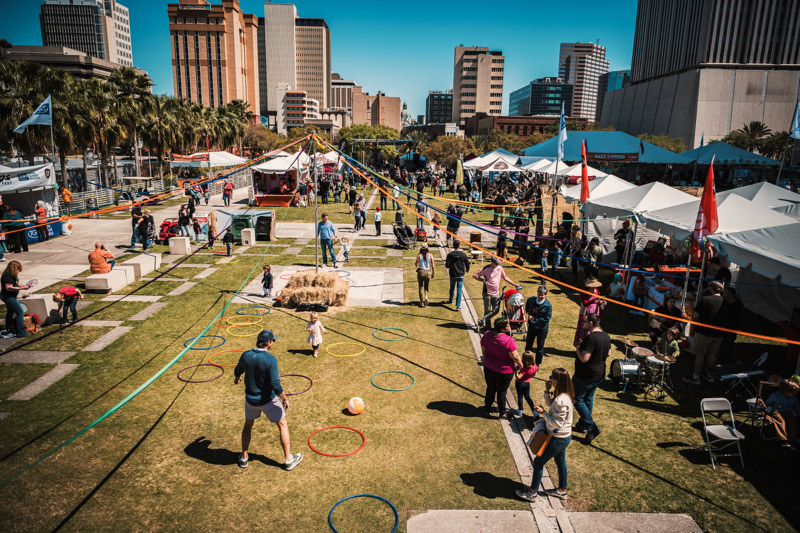 What better way to start Spring Break than a music festival in your own backyard? Thankfully, Gasparilla Music Festival (GMF) in Tampa, Florida has this covered. Being held in downtown Curtis Hixon Park with headliners Brandi Carlile and Portugal. The Man, the two day festival kept Tampa Bay on its feet and in the sun for a weekend of great music, mouth-watering food, and fun-filled activities for the whole family, March 7th & 8th.

With a cold-front coming through the Bay, GMF’s day one was a sunny yet windy day for festivalgoers. Closing out Saturday’s lineup was genre-spanning singer Brandi Carlile, with lead up performances by several local bands early in the day and Rival Sons and De La Soul ending right before her set. 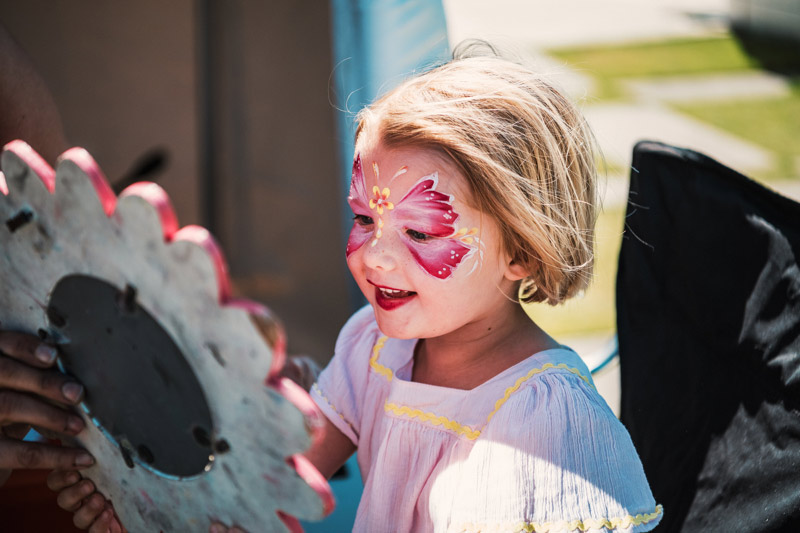 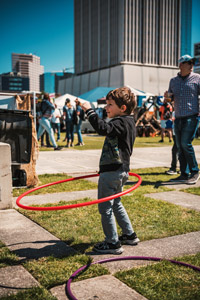 What makes the festival standout is what it gives to the fans with families. Gasparilla Music Festival was proud to say they have their very own Kids Festival. Providing activities that involved kid’s bands and its very own section in the festival, the kids fest gave parents the chance to bring their kids along with them to a safe and happy environment, and keeping the kids entertained and not having to worry too much about the crowded audiences. 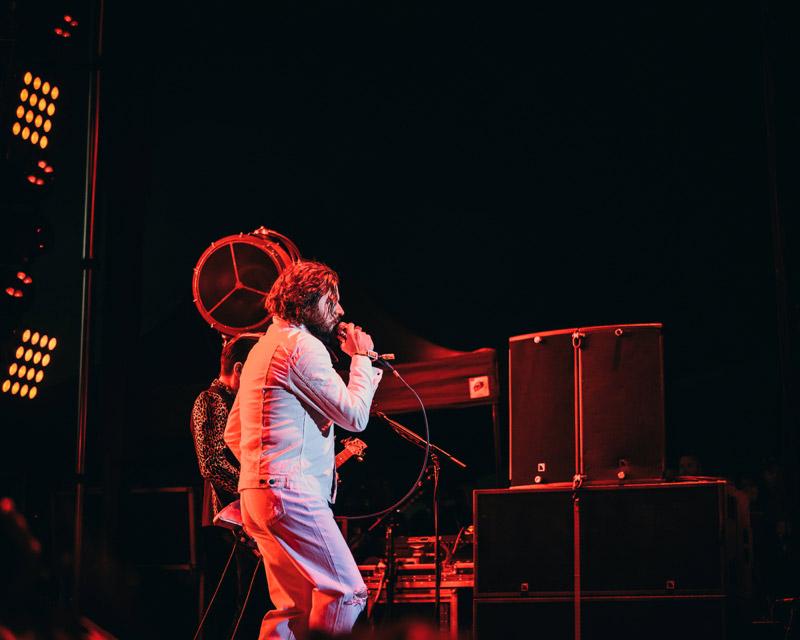 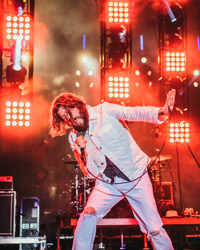 Commanding the main stage before Brandi Carlile’s performance, American rock band Rival Sons started out their set after the sun had receded and the moon having risen high in the sky. Bellowing into the night, lead singer Jay Buchanan, guitarist Scott Holiday, drummer Mike Miley, and bassist Dave Beste opened up their set with a performance of “End of Forever” from last year’s Feral Roots. Performing for an hour, the band gave the festival everything they hoped for, serenading with songs from their latest album and a few throwbacks to older pieces. The band performed passionately under the red and white lights of their set, with the stage’s smoke machines surrounding them in an ethereal cloak. With Buchanan bouncing around the stage, moving onto the front thrust of the stage with the crowd, and the rest of the band strumming off their instruments behind, the four-piece re-energized the crowd to keep their feet going for the rest of the night. 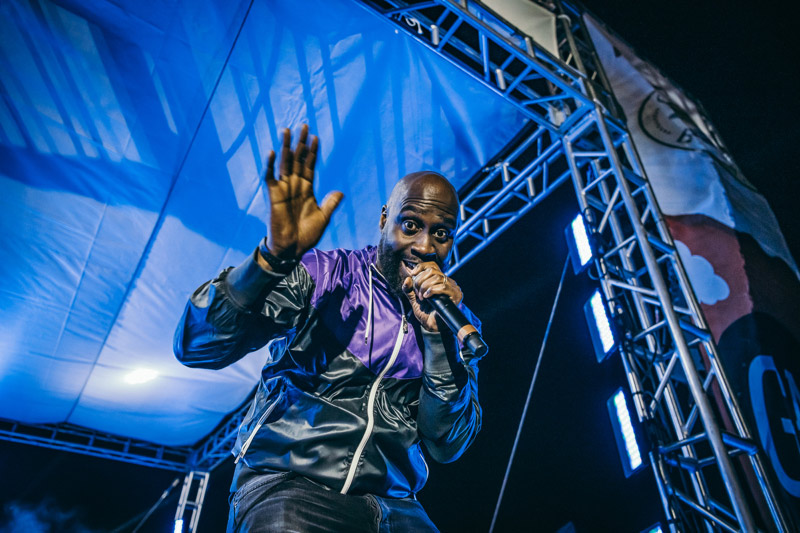 While Rival Sons put on an exhilarating show at main stage, three piece hip hop group De La Soul was setting up on another stage at the festival for their performance. Known for their Grammy winning collaboration “Feel Good Inc.” with the Gorillaz in 2006, the group was set to perform for their own mini-headlining show at Gasparilla Music Festival. Normally consisting of members Posdnuous, Trugoy, and Maseo, Trugoy was unable to perform with the group. Instead, Talib Kweli was announced to join the group in his place. Opening with “The Return of DST”, a tribute to turntablist Grandmixer D. ST, the group quickly got to work exciting the crowd. Soon into their set, Maseo moved off his turntable to join Posdnuous and Kweli on the front of the stage. While performing, Posdnuos would occasionally jump on top of the speakers to get closer to the crowd and getting down close to get into the photographers’ lenses, waving to them and giving them a big grin for the money shots. With their set being one of the last before Brandi Carlile’s headlining set, De La Soul stepped off-stage, saying goodbye to their Tampa fans and telling them, “Get your asses over to the main stage for the head showgirl of the night!” 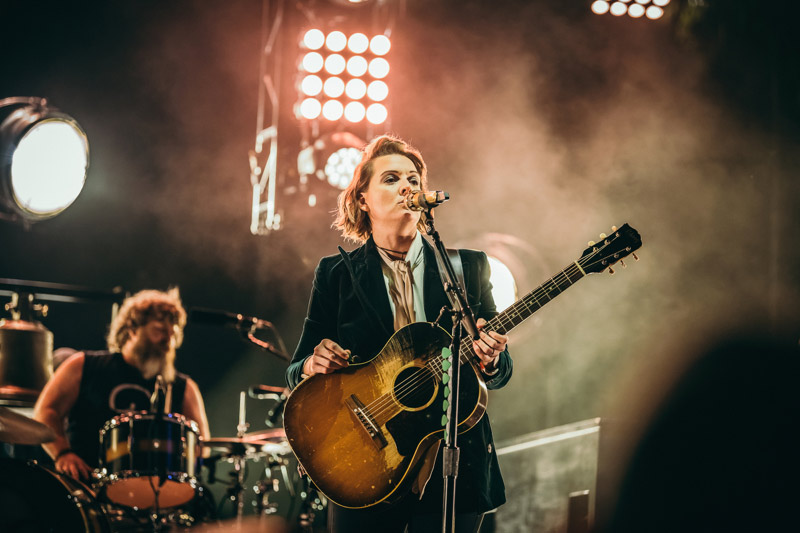 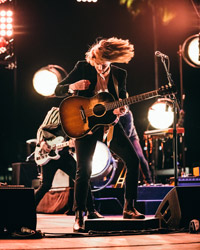 Well-known for her multiple Grammy winning songs and albums and her self portrayal in 2018’s film A Star is Born, Brandi Carlile, backed by twins Phil and Tim Hanseroth, brought her 2020 tour to Tampa’s Gasparilla Music Festival. Introducing Carlile was the mayor of Tampa, Jane Castor, letting go of her usual professional appearance and yelling out to the crowd to, “Give Brandi and the twins a proper Tampa welcome!” Carlile opened her set with a few of her top songs, including “The Story” from the 2007 album The Story & Cover Stories. Singing under the stage’s blue, yellow, and red lights and with the moonlight creating its own spotlight, Carlile got up close and personal with the crowd, occasionally stepping away from the mic so she could move up along the apron of the main stage to be closer to her fans as they finished a song’s verse. Playing late into the night, Carlile brought her energy and soul-filled songs to Tampa Bay, closing out the first day of the festival. After her performance, fans and families alike soon headed home, ready for some much needed rest before part two of the festival the next day. 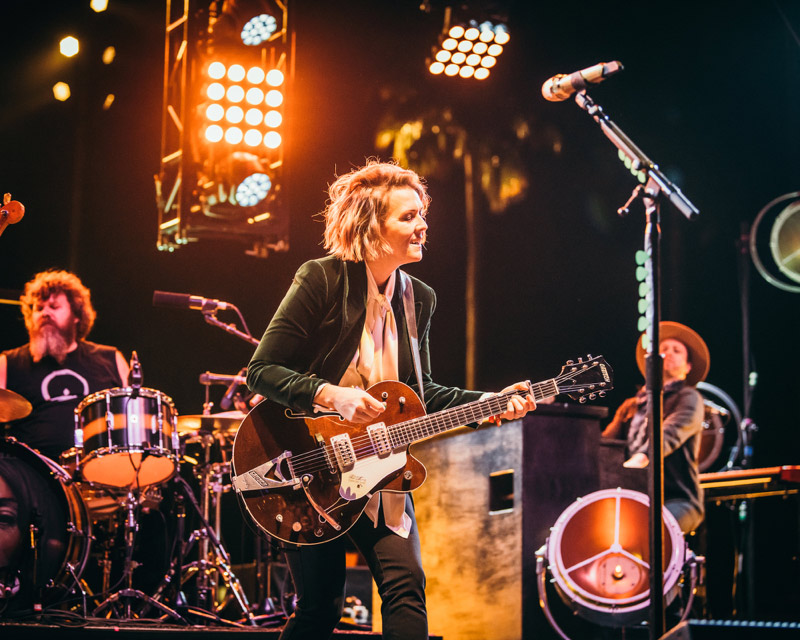 Riding off the cold front of Saturday’s weather, GMF’s Day Two on Sunday started out nice and warm for both two-day and one-day festivalgoers. Attendees were quick to arrive on Day Two, with many having showed up by the time that gates opened a half-hour before noon. Starting out the day were several local Tampa Bay bands on the smaller stages, and a few young community orchestras and gospel choirs on the main stage. The second day of the festival may have ended earlier than the first, but that didn’t stop any of the talented musicians from holding back. Closing out the final day of GMF was Alaska’s Portugal. The Man, with artists Anderson East and SALES leading up to the final show of the weekend. 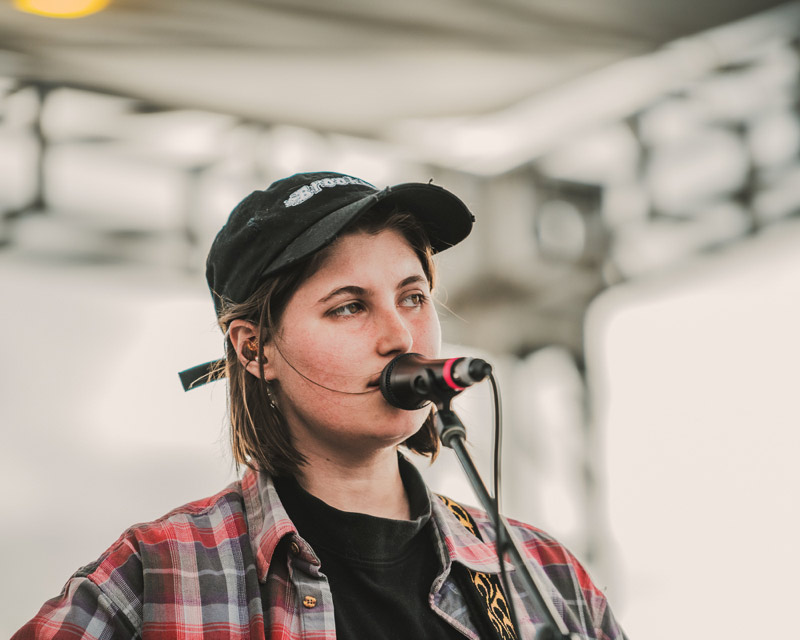 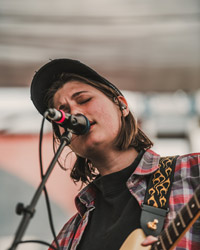 Hailing from neighboring city Orlando, indie-pop group SALES was set to perform one of the leading sets before Portugal. The Man’s closing show. Coming out with a sense of nervousness, lead singer Lauren Morgan, guitarist Jordan Shih, and touring member/drummer Malcolm Martin shyly moved to their instruments. Before opening their set, Morgan gave a big shout out to the band members’ moms, who all came over from Orlando to cheer on their daughter and sons’ big performance. Starting out with a short instrumental intro, Morgan soon began into their set with her sweet, calming, iconic voice. Playing out their set under a cloudy sky, the band performed for a massive crowd in a small section of the festival. Before closing out their set, the band invited both members of GMF’s staff and members of the audience to join them on stage, dancing around and having fun with the performers. 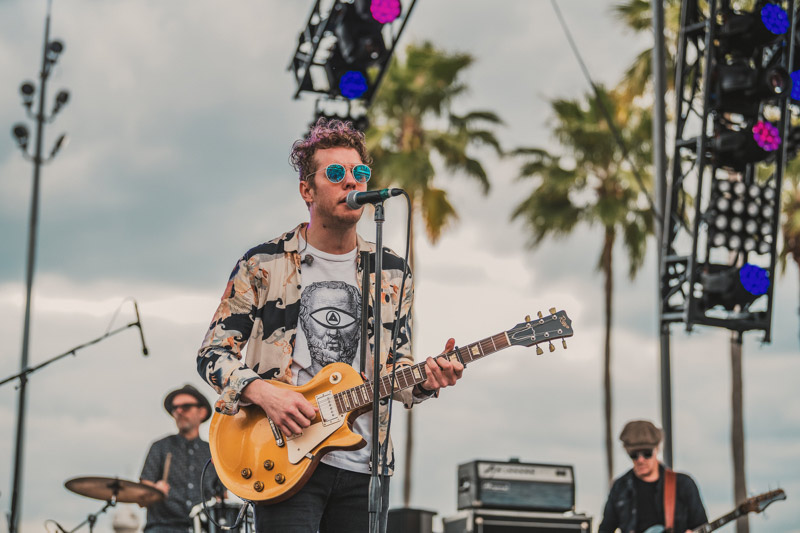 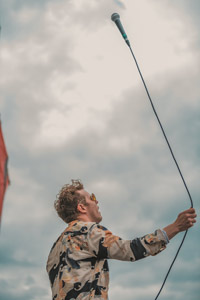 A few technical difficulties and a slightly late arrival to the stage didn’t stop Anderson East from jumping straight into heavy guitar riffs and spirited vocals. Calling Nashville, Tennessee his home, the R&B musician let it all out in the warm Tampa afternoon. Moving from strumming his guitar and carrying the mic to the apron of the stage, East roared out musical notes with his soulful voice and breathtaking guitar solos. Getting the crowd to sing along a few times, East would hold the mic out to the audience, then tossing it into the air and yanking it back to himself with the chord as if he were throwing out a lasso. Even with a rocky start to his set, East made it up to his fans, closing out his set with every pair of hands in the crowd clapping or cupping around mouths to yell out in excitement and passion. 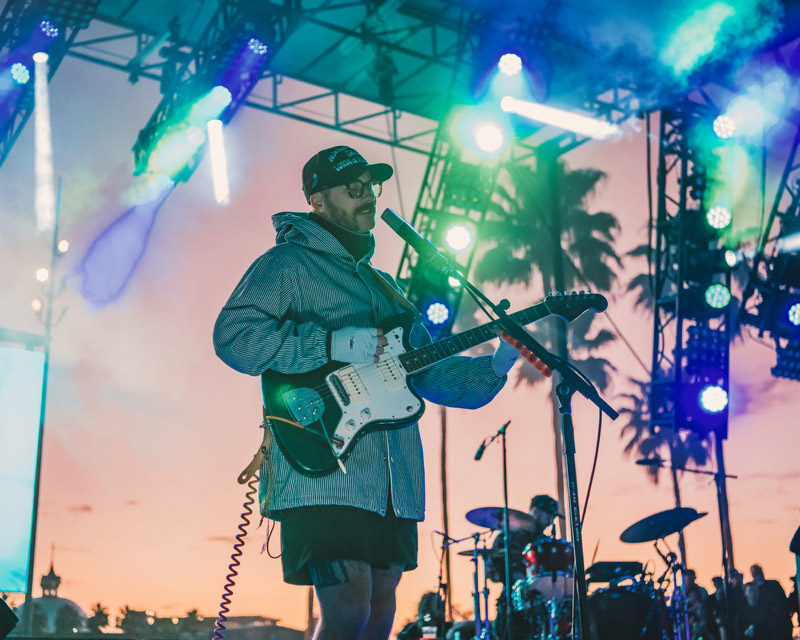 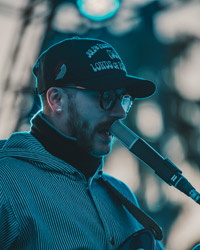 With the weekend soon to end, the final stars of the festival prepared to take the stage, Portugal. The Man. Opening with an intro using the iconic Beavis and Butt-Head, vocalist John Baldwin Gourley, bassist Zachary Carothers, keyboardist Kyle O’Quin, guitarist Eric Howk, drummer Jason Sechrist, and finally backup vocalist Zoe Manville soon made their appearance on stage. The six-member band hailing from Wasilla, Alaska and Portland, Oregon soon opened their set with covers of Metallica’s “For Whom the Bell Tolls”, Pink Floyd’s “Another Brick in the Wall Part 2”, and smoothly transferring straight into their hit song “Purple Yellow Red and Blue” off their 2013 album Evil Friends (QRO review). Playing a mixture of songs both from their early 2000’s albums and their 2017 record Woodstock (QRO review), the band catered to a mixture of both new fans and longtime fans. Creating an infernal sky of colors, the sun’s rays shone off the proscenium arch of the stage as the headliners’ sung away the day. Ending their set with the light of a new moon rising in the sky, the band performed under the purple and red lights of the stage, awash in a thick shroud of smoke. As Carothers took a massive swig from a bottle of Jameson Irish whiskey, finishing it and tossing it aside, the band soon began to close out their set. The band ended with a performance of “Feel it Still” from their 2017 album and a mix between “Sleep Forever” from 2011’s In the Mountain In the Cloud (QRO review) and a cover of The Beatles “Hey Jude”. Bidding farewell to their Tampa fans, the band stepped off stage as members of the audience began to pack their things and tiredly made their ways home. 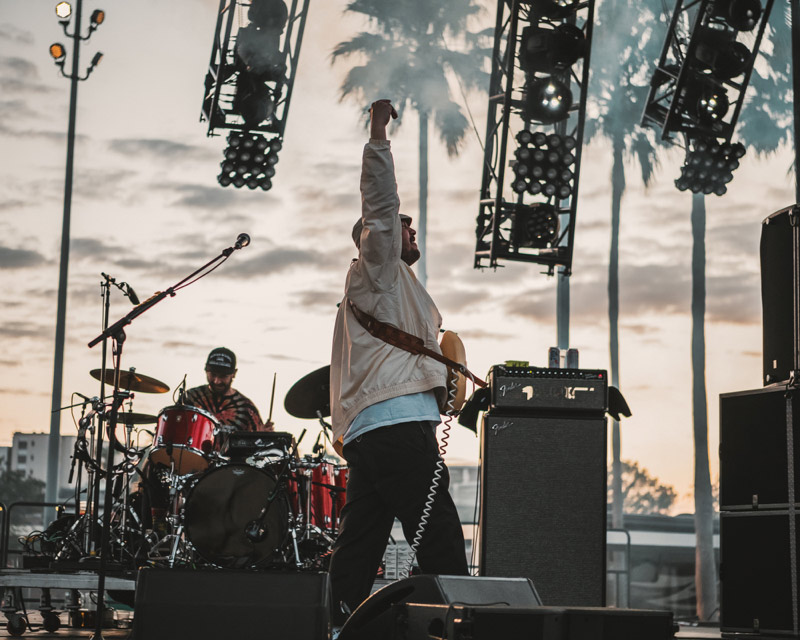 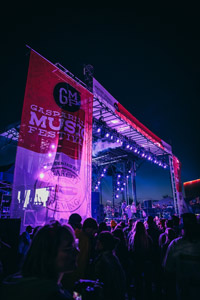 With so many talented artists, Gasparilla Music Festival gave Tampa exactly what it needed for the beginning of many residents’ Spring Breaks. Even with only two days of music, the festival gave out the same energy as some of the biggest festivals around the world. Celebrating its 9th anniversary, the festival held its highest number of attendees yet, giving everyone the excitement of what’s next to come as they wait another 365 days for another festival of great music right in the heart of Tampa.