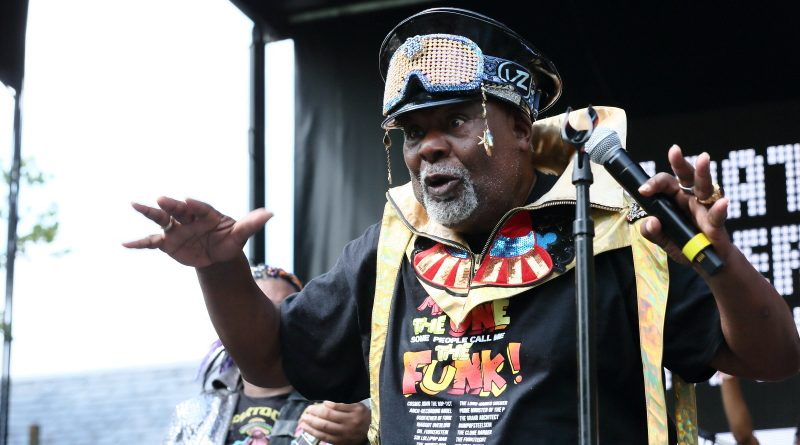 It has been a long, long year-plus. As we all – we all – have gone through this COVID pandemic and the ensuing lockdown, we have missed doing things with other people, live music very much included. Summer ’20 was basically cancelled, your shorts & sunscreen kept at the back of the closet. Now there has been a tentative opening, poking your head outside to see if the coast is clear, but not sure if you can party yet. Well, New York’s Central Park SummerStage (QRO venue review) very much partied as the iconic George Clinton & Parliament/Funkadelic came to play the first of their two shows on Sunday, June 27th for Blue Note Jazz Festival.

Some obvious notes: It was hot outside. Literally, there was a heat advisory for Manhattan (according to the iPhone weather app). That did drain people, sheltering in the shade along the sides & back of SummerStage until the music. And there was no free water (or misting tent, like at the same time of year for Canada Day in ‘18 – QRO live review) thanks to the even bigger elephant of the coronavirus. The crowd area had designated seats, broken out in to two- or four-person groups. Oh, and it was also Pride Weekend of Pride Month, the 6 train only running express uptown as the downtown was in full rainbow flag colors.

But none of that stopped people from getting funked up! George Clinton is a living legend, the undisputed greatest of funk music, and someone that pretty much everyone should see live in their life. Indeed, there’s no one who dislikes him & Parliament/Funkadelic, no one who wouldn’t enjoy seeing them live. This was a ticketed show, but the crowd still ranged widely in age, from hipster millennials to baby boomers reliving the jams of their youth. There were event parents with their young kids, because the Mothership Connection carries with all ages.

And the setting/time actually worked for it all. The assigned seats were more like suggestions, and one could easily move up closer to get your funk on – and/or sit down, to catch your breath under the sun (under the sun!). It was one nation under a groove, and you could do whatever you wanted (except smoke – fire laws are still in effect). Indeed, many fans who were hot took the signs indicating letter sections and used them as hand-fans (though no one spelt out the likes of “PFUNK” like your correspondent wasn’t funky enough to do…).

Before everyone got up on the downstroke (get on up), there was a DJ set by Louie Vega, and a surprise one-song performance by Blue Wolf Experience, the band for Miss Velvet & Blue Wolf. The one song actually went well, the late add (even staff didn’t know who exactly they were) a nice warm-up for the crowd that was likely too hot, too old, and too unused to live shows to get up from the downstroke.

And introducing the main act was none other than Benjamin Crump, the attorney for the family of George Floyd, Trayvon Martin, and more. The current civil rights champion said how he was, in everything he did, trying to bring people together, and that no one brought people together like his Omega Psi Chi fraternity brother George Clinton – under a groove. This last year-plus has also been very much about social justice, from Floyd to Pride, and this Parliament has been waving the flags that matter for nigh on a half-century.

Now, yes, the main act didn’t go on until 3:20 PM, after the official start time had been moved to 2:00 PM, but they played almost until 5:00 PM. And yes, your favorite Clinton did occasionally sit in the folding chair on stage provided for him, in front of the drum riser. But, so did you. And the Prime Minister of Funk brought a massive band with him, more back-up singers than you could count, who not only sang but also danced (props especially to the ladies – at least one changed her outfit at least once during the set, always fly) – one even went into the photo pit (while photographers were still there, because the ‘first three songs limit’ for photographers goes extra-long with the Funkadelic jams). Hell, even the white boy playing funky music on the keys in the back got to sing, because as much as Clinton is the leader of the Party, it is a mass movement.

Way back in the before-time of 2019, George Clinton said that he would retire after one last tour, because the man is older than President Joe Biden. The COVID pandemic stopped the tour, but he & his could have easily said that was it (they all were given the Lifetime Achievement Award Grammy in ’19). He noted that the funk would keep going long after him (he even got a hologram of himself, for Vegas). But if there was ever a time we needed to be under nation under a groove, if we ever needed live music to come back, it was Parliament/Funkadelic at the iconic Central Park SummerStage.