A sumptuous calling card for a band that’s early out of the gates but ready to run.... 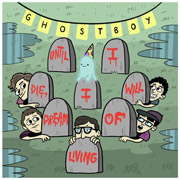 EPs stand for ExPloration.  Established artists like Girls (hey, ‘established’ is relative in independent music) can use EPs to reinvent, or reintroduce, themselves in the hunt for a more ambitious future (at least before flaming out: HELLO LYSANDRE!).  For the young guns, on the other hand, EPs are the first chance to strike out into the sometimes nerve-wracking territory of committing their tentative sonic vision to hard copy.  That’s what we have with Ghost Boy’s Until I Die I Will Dream of Living: a sumptuous calling card for a band that’s early out of the gates but ready to run.

Ghost Boy hails from the Garnet-state, the Robin-state, the Yankee Doodle-state – in other words, the chief ‘flyover’ state of the Northeast, barring New Jersey, home of American squalor and nacho cheese.  So it’s somewhat apt that an incipient EP from an emerging band should be nurtured within the fair womb of the Sperm Whale-state: gory, raw, and wonderful things gestate incognito.  And to mention one song?  “Suburban Creep”.  Say no more!

Lead vocalist Jeremy Stern brings a loose and easy rock swagger to the lyrics, a kind of junior Julian Casablancas.  It’s a nice point of departure for the stock of five songs that push in different directions of rock, blues, and jazz.  The ‘Qui transtulit sustinet’-state has a knack for incorporating a lot of different sounds into its sonic cauldron.  After all, Bela Fleck is from there (not true), the rock/jazz milestone Bitches Brew was recorded there (not true), and Sun Ra declared Connecticut the most trans-galactically inspired state of the union (New Jersey being the least).  That’s the kind of lateral groove that lets a band swivel from the sweet Southern Rock-meets-Strokes vibe of “Sisters”, to the pulsating Franz Ferdinand-esque art-dance of “Away”, to the quizzical Creep-esque creepy Weezer-ness of “Suburban Creep”.

Ghost Boy can dial it down a notch when the crowd wants to slow dance.  Witness “Friends”, and especially “Young Love”, which evince the kind of subtle emotion that a juiced up gorilla from the Jersey Shore could never muster in his wildest ‘roid ragin’ fits of inebriated, confused jealousy.  On the contrary Until I Die I Will Dream of Living exhibits an emotional and musical maturity of a band that doesn’t want to work at a T-shirt shop for a living.  Not that there’s anything wrong with that.  Jersey sucks.

With an EP sewn together so sweetly, a Ghost Boy LP can’t be far behind.  Keep an ear open and, if you’re from Jersey, your goddamn mouth shut.  Jersey sucks.