The debut self-titled full-length from Mike Doughty's new band, Ghost of Vroom, does sound like Soul Coughing, in the right ways, while also feeling like its own thing.... 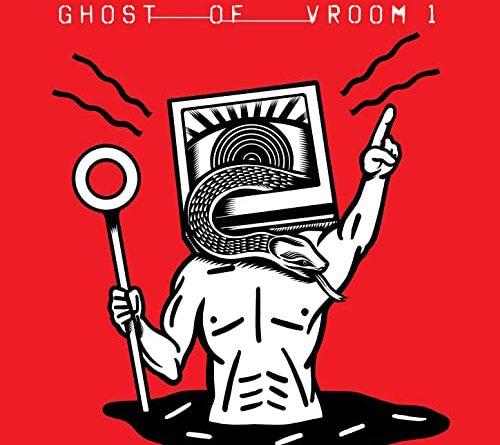 Once upon a time in an era known as ‘the nineties,’ Mike Doughty was the frontman/songwriter for alt-hit Soul Coughing, whose use of rhymes and samples made them more like the decade’s hip-hop than its alt-rock. But as a new century/millennium dawned, Doughty acrimoniously ended the group and embarked on a sober career more in the acoustic singer/songwriter vein (he opened for Dave Matthews). Of course, there are still those who wanted the old Soul, and Doughty did slowly, finally respond to those requests, re-recording their most popular tracks, touring that (QRO live review), and more recently touring specific Soul Coughing albums such as Ruby Vroom (QRO live review), usually with main sideman Andrew “Scrap” Livingston. Now he – and Livingston – have stepped forward into this new world as the new duo Ghost of Vroom. Debut full-length Ghost of Vroom 1 (which ironically comes out after the later-recorded debut EP, Ghost of Vroom 2 – QRO review) does sound like Soul Coughing, in the right ways, while also feeling like its own thing.

Doughty’s Soul Coughing style free jazz-ish rhymes are all over Ghost, from opener “More Bacon than the Pan Can Handle” to wry closer “They Came in the Name of the People”. It’s a vocal style that’s very hard to get right (think of all bad slam poetry), which made Soul Coughing stand out then and makes Ghost of Vroom stand out now. The rhythms behind the rhymes on Ghost are chiller than Coughing, trading some energy for meaning. Standouts include “Bacon”, the great pressure “fire next time” “Revelator”, spark-behind-the-chill single “I Hear the Ax Swinging”, and the touching, smooth, authentic feeling in “James Jesus Angelton”, which best marries Doughty’s Soul Coughing and twenty-first century solo singer/songwriter (indeed, one kind of wishes that there had been more in the vein of “Angelton”, but maybe that’s for Ghost of Vroom 3).

Mike Doughty always knew that, for better or worse, his post-Soul Coughing material would get compared to what got him notice in the first place. He spent years reacting against that, before eventually coming to some peace with it and even embracing the old days. Now he and Scrap are taking it all into the next stage.

The Joy Formidable – “Into the Blue”