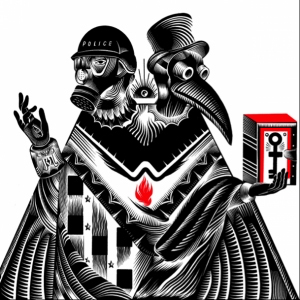 Mike Doughty came to the musical world fronting nineties alt-act Soul Coughing, which was more modern nightclub jazz than guitar rock.  After the acrimonious dissolution of Soul (and getting sober), he forged a great new solo career – but people still wanted to hear the old Coughing tracks of their youth, even after he put out a memoir about how hard that time was for him (The Book of Drugs), an album of him reclaiming those songs (Circles, Super Bon Bon…), and toured both it (QRO live review) & Soul Coughing’s Ruby Vroom (QRO live review).  Now he’s teamed up with longtime live backing band man Andrew “Scrap” Livingston as Ghost of Vroom, and the new three-song EP, Ghost of Vroom 2.

First things first, Ghost of Vroom is just three songs.  Second things second, it sounds a lot like Soul Coughing.  Third things third, it was made during the current pandemic lockdown.  Single “Rona Pollona” (QRO review) is most explicit, Doughty’s smooth rhymes & rhythms that will outlast the coronavirus.  “1918” is perhaps the most Soul Coughing-like, cool lines over cool beats about life today (referencing the year of the Spanish Flu epidemic).  Meanwhile, “Chief of Police” is more of an instrumental improvisation.

Hopefully a Ghost of Vroom full-length will be coming at some point (Ghost of Vroom 3?), because this pandemic isn’t going anywhere, and neither is Mike Doughty.