The early nineties alt-boom gave birth to many bands, many albums, and many singles that are still loved to this day.... 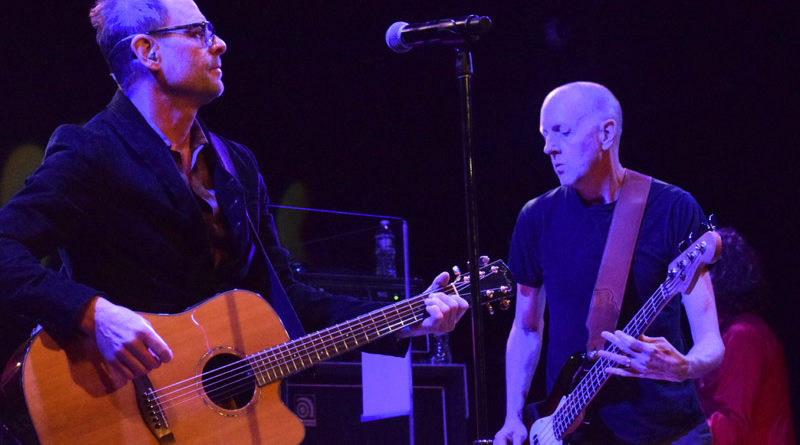 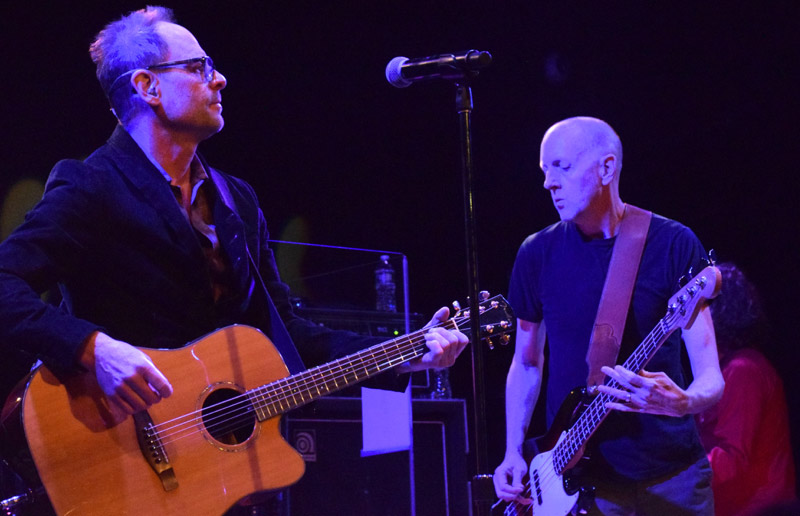 The early nineties alt-boom gave birth to many bands, many albums, and many singles that are still loved to this day. Back before millennials were streaming the latest remix, Generation X was buying CDs of overnight sensations from all over. Suddenly indie bands from local scenes were signing huge major label deals, littering the radio and MTV with hits. Like hippies going psychedelic in the Summer of Love, punks thrashing out in the Spirit of ’77, or hip-hop right now, it was a special era, such as Gin Blossoms’ New Miserable Experience, which they brought to New York’s Bowery Ballroom in 2019, on Monday, February 11th. 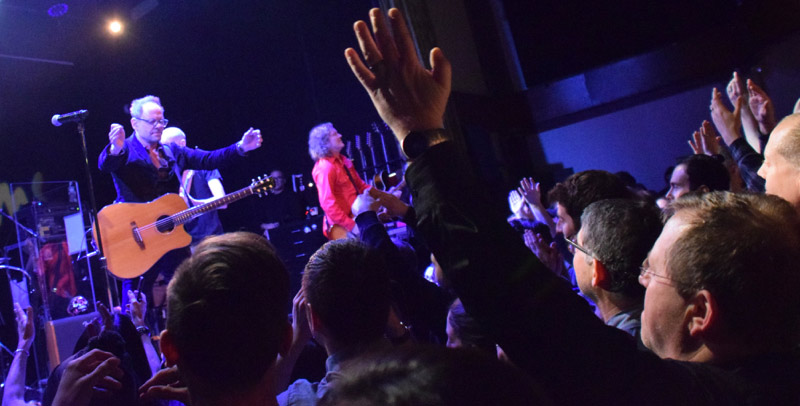 Yes, it was a crowd of thirties and up, but they packed Bowery Ballroom (QRO review) – many probably hadn’t been to a show in a long time, as they were shocked at how full the sold-out space was (Gin Blossoms were even able to sell out $99.00 VIP tickets). But the crowd wasn’t full of grey old fogies, as these men and women had kept better care of themselves. So has the band, though singer Robin Wilson at one point joked that he could no longer hit a few highest notes – but the group wasn’t at the aged point where they would tune their guitars to match an aging lead singer’s reduced vocal range (“Maybe in another ten years”).

While the show was billed as doing 1992 debut New Miserable Experience (please hold your ‘it’s not New anymore’ jokes…), the Gin Blossoms opened with some newer, twenty-first century pieces, “Here Again”, “Break”, and “Still Some Room in Heaven”. They were actually fun, but one couldn’t blame the crowd for being impatient for the record that they came to see.

After that and introducing the band (Wilson citing where in Arizona each came from, though noted that he’s from much closer Long Island), New Miserable Experience began. “Lost Horizons” is a wonderful start, as good and single-worthy as the hits from the record, including their following biggest, “Hey Jealousy”. Gin Blossoms and their fans may no longer be the aimless fun youths who would “Drive around this town / And let the cops chase us around,” but the song still has its bittersweet lost romance. Of course Wilson pointed his mike to the crowd multiple times during it, as everyone knew all the words. 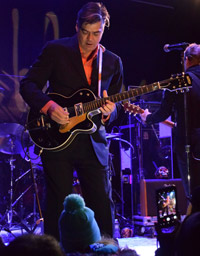 Wilson then noted that the next song, “Mrs. Rita”, was an early staple of theirs written by guitarist Jesse Valenzuela – and later made the key reference to group’s original songwriter, the late Doug Hopkins, who penned so many of the best New Miserable pieces, including “Lost Horizons” and “Hey Jealousy”. The story of Hopkins’ descent into alcoholism, forced out of the band & even to give up much of his songwriting credits by the label, then suicide, is the tragic underlying tale to the Gin Blossoms. But over twenty-five years have passed, enabling the group to come to terms with it all. Wilson asked the crowd to raise a glass (Wilson had his own special mug) to Hopkins before the one piece they “officially” wrote together, another could-have-been-single (and Wilson’s favorite on the record) “Hold Me Down”. It was touching, remembering lost youth with lost friend, as was his later tribute to Hopkins, talking about them being young and high and talking and driving to Tucson before “Pieces of Night”.

New Miserable Experience also still holds up today, unlike a lot of nineties alt-pop. The record is quite diverse, from the jangle romance of “Hey Jealousy” to country of “Cajun Song” and “Cheatin’”, as well as the pushing tragedy of “Lost Horizons” and its other big hit, “Found Out About You” (where again Wilson would point his mike to the crowd for the sing-along). Okay, so no one there was twenty-nine for “29”, and the only time they’d be in the “schoolyard” of “Found Out” was to pick up their kids, but the album isn’t frozen in time, or cringe-inducing when listened to as an older adult (no millennial is gonna still hold to fun.’s “We Are Young” when they inevitably age).

Gin Blossoms playing “Found Out About You” live at Bowery Ballroom in New York, NY on February 11th, 2019:

Usually, when artists do ‘play an album in full’ shows, the body of the set is the album, and then the encore is extras, from b-sides of that era to new songs. But not only did Gin Blossoms start with new material, but did more numbers after, ending with their Empire Records soundtrack single, “Til I Hear From You”. We may not have record stores anymore, but we still have Empire Records.

And there was another curveball in the encore. Wilson stated that for this tour they learned a cover they’d never done before, and it was an interesting and compelling choice: Radiohead’s “Fake Plastic Trees”. That act may have gone many, many places since their own early nineties alt-debut, but we all still love The Bends, and Gin Blossoms nicely started the song with just Wilson solo, before the rest of the band joined in. And there was one more hit single to end the night, “Follow You Down” from New Miserable follow-up, Congratulations, I’m Sorry. 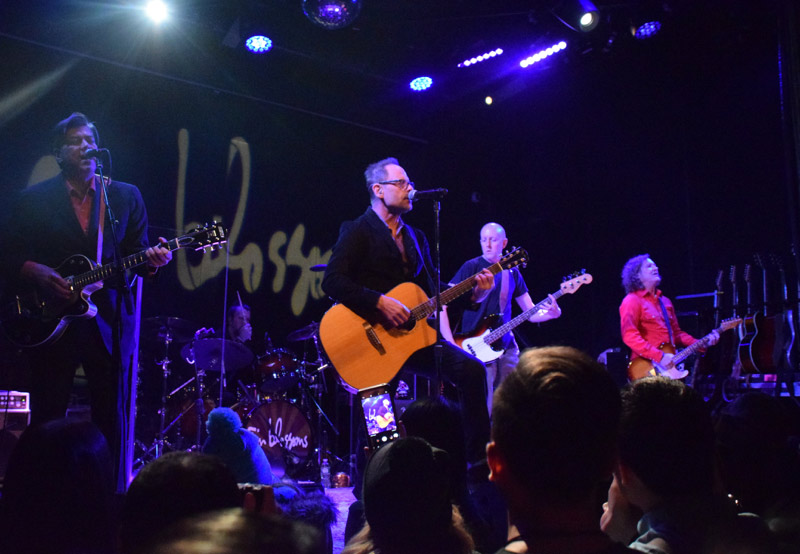 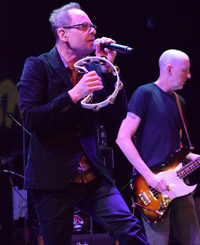 Going back to one’s younger days is always a tricky proposition, as it’s so easy to get trapped in melancholy nostalgia, invoke a mid-life crisis that things will never been as good as they were back then. It can also rub the wrong way, disrespecting everything that came after, even feel obligatory. But it was great to see Gin Blossoms and their fans just enjoy doing New Miserable Experience and more, from Wilson repeatedly picking up a tambourine, only to give them to crowd (one wonders if they got them back after the show was over), to singing along to “Hey Jealousy”.

[note: Gin Blossoms were also selling an autographed acoustic guitar to raise money for Jail Guitar Doors, a charity giving guitars to prisoners for rehabilitation, and possibly the best named musical charity out there] 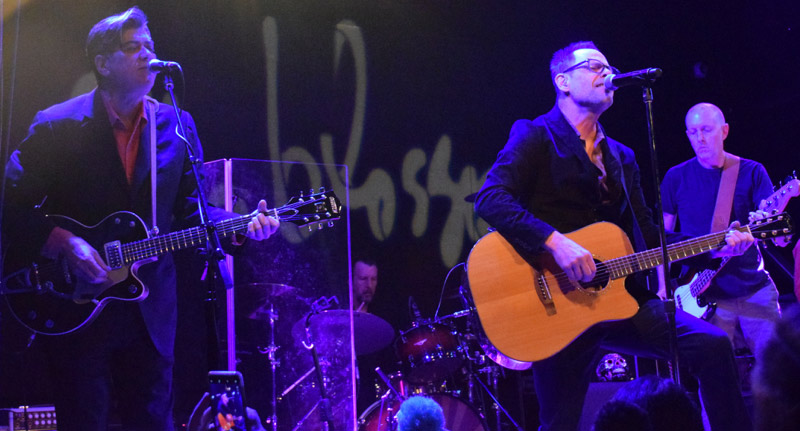