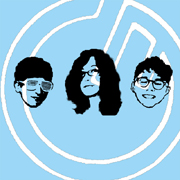 Once in a blue moon a movement kicks up on the scene that makes a big fuss over the way an artist’s music finds its way to the listener’s eardrums.  Remember the four-track hullabaloo in the ‘90s?  Didn’t matter if the music was the most god awful shit ever produced – if it was churned out on one of those cheap Aiwa four-track recorders, then it deserved a listen.  Now finally the twenty-first century has its own trend: cassette rock!  (blame the lame name on the blogger YVYNYL) Before you run for the exits, remember that Beck (QRO album review), the Libertines, and Lou Barlow (QRO album review) did some of their best work on the humble four-track.  There is a cream to every crop, and cassette rock might have found its very first keeper in Our Very First Cassette by Girlfriends.

The three-piece out of Boston wastes no time on stylistic curlicues in their compositions.  Fuzzed-out, stomp-boxed ‘60s power-pop melodies grab you in the first few seconds and don’t let go.  The song "suckin rare meat off the bone white china" mixes whammied guitar, megaphone vocals, and some rough Beach Boys’ harmonies into a far out surf safari.  "good to be true" is a straightforward Ramones-style ballad starring an as-yet-unidentified "space alien laser" solo.  "bites + scratches" captures Girlfriends in a more reflective, Pogues-mode, attempting to muster up a mood of good old-fashioned heartbreak.  It’s a great song, but the heartbreak isn’t entirely persuasive.  The pop riffs and off-the-cuff delivery are just too damn fun and entertaining to frown over.

The five songs on Our Very First Cassette are quick and dirty romps by a band that knows how to cut to the chase.  The cassette format is mostly tangential to the final product with this one exception: anytime you lower the bar on production values, you focus more attention on the basics of song structure.  Girlfriends has put together an album that, like a great Kinks tune, is spellbinding in its simplicity.  Even more importantly, they’re obviously having a ball with the songs (at one point they rhyme ‘mystical’ with ‘testicle’ for god’s sake) and you will too.

Whether this heralds a triumphant return to the cassette (don’t hold your breath) remains to be seen.  There’s a slew of bands that have recently released work in the format, including Quilt and Truman Peyote.  These are bands that play all different types of music – garage, electronic, folk, psychedelica – so there doesn’t seem to be any coherent movement afoot.  But one trait they do share is that they’re all putting together exciting new music that merits attention: really, what more could you ask for?