<img src="http://www.qromag.com/wp-content/uploads/2009/12/girlsalbum.jpg" alt=" " /><i>Album</i> masterfully encapsulates the relaxed and carefree lifestyle of California, but underneath is a fragile, darker side. ... 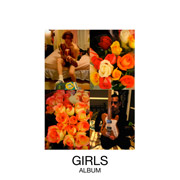 The origin of Girls is one of almost mythical calibre.  Over the course of the band’s relatively short existence, only two things have remained consistent in their ever-changing world of debauchery, misadventures and religion – a predilection for pharmaceutical induced highs, and an almost pathological obsession for The Beach Boys.  The fusion of the aforementioned produces a result that is both astonishing and beautiful.

Yet in order to fully understand, appreciate and analyse the music of Girls, one must recognise the turbulent albeit tragic childhood of front man Christopher Owens.

Owens was born into the highly controversial Children of God cult.  Founded by an outspoken anti-Semitic paedophile, Children of God is a fundamentalist Christian offshoot that focuses on apocalyptic ruin and human sexuality.  That’s some messed up shit right?  Owens’ father abandoned the family (can you blame him?) so his mother – a firm believer in the cult’s practices, raised young Christopher alone.  Together they lived a nomadic lifestyle and travelled the world searching for souls that needed ‘salvation’.  Owens experienced countless tragedies whilst living in this perverse milieu – from the death of his brother (due to the cult not believing in medical treatment), to the wilful prostitution of his own mother (to raise money for the cult’s exploits).  Christopher truly lived a life most youth could not even fathom.  Escaping the cult at 16, Owens then moved to Texas and drifted around in the backwaters of society.  Just when it seemed his future was destined to consist of shady drug deals, petty crime and a probable early self-inflicted demise, a local wealthy philanthropist took Owens under his wing and gave him newfound hope and a way out of his current self-destructive lifestyle.  Soon after this, Owens met future band-mate JR White and the two moved to San Francisco, where they would write and perform music together under the moniker Girls.

As far as band chronicles go, this one is so epically proportioned that you cannot possibly doubt its integrity.  It is the type of history that can overwhelm and envelope a band so much so, that one never really hears the music; they only hear the story.  So it’s a tribute to Girls that you do not have to have any prior knowledge of the band to hear their music as it is: hypnotic and seductively tortured.

Girls debut album is simply called Album, but despite the seemingly lack of inspiration when it came to naming their musical debut, the title holds some truth about the duo.  Obvious, plain and straightforward, Girls have nothing to hide.  Yet it is the subtle nuances of Album that make it so fresh and addictive.

Just like the vast array of narcotics consumed during recording, the music on Album drugs you into a peaceful state of innocence and youthful abandon.  Owens’ voice is affable and endearing.  When he fervently sings, you believe every word.  And when he laments about his troubles in a beguiling and jaunty tone, with a raw quaver at the back of his throat, there is no trace of insincere affectation.  The other half of Girls, JR White, handles production and most instrumental duties.  White’s meticulously produced arrangements help organize and highlight Owens’ meandering and psychedelic ideas.  White helps Owens create a canvas on which he is able to paint his tragic landscapes.

Album masterfully encapsulates the relaxed and carefree lifestyle of California.  But underneath the faultless and cheery pop façade is a fragile, darker side that represents the realities of Owens’ life.  It’s a stark contradiction that makes Girls music unique.  The duo puts their alchemy of sound through a sepia-toned sunshine filter.  The result of which is an ethereal haze, a sound that completely transcends any genre restriction.  Bittersweet yet entirely comfortable, nostalgic yet not wallowing in the past – a musical achievement that successfully integrates many a decade worth of musical styles and then serves them in a minimalist package.

The Beach Boys influence is by far the most prevalent on Album.  From the twangy guitar lines on "Laura", to "Big Bad Mean Motherfucker," a complete throwback to surf-pop – the duo draws on several 60s musical styles to create their fresh new sound.  Channelling Brian Wilson on many occasions, Christopher Owens adds a tormented depth, unbeknownst to the famed Beach Boy.  Album is best described as a lo-fi Pet Sounds, a stripped down version, completely free of the lavish orchestration but retaining the harmonies, melodies and aesthetic of The Beach Boys’ opus.  With that said, there are many other genres and styles found on Album.  From poppy, bubblegum beats – a-la Turtles, to the shoegaze soundscapes of My Bloody Valentine, to Elvis Costello-ish musings and Buddy Holly inspired ballads.  Album is a musical platform for an amalgamation of genres, styles and influences to emerge.

Another impressive and surprising aspect of Album is the fact that no song on it was recorded in a studio.  Mostly recorded in cramped, dingy rehearsal spaces on computers that were well passed their use-by-date and now probably considered retro, Girls possess a nonchalant attitude when it comes to recording procedures.  But the lack of production work and studio flare gives Album an even more authentic and uncommercial feel.  Possibly due to the poor recording conditions, but more likely because of the copious amounts of prescription pills taken, the record jumps from genre to genre in no recognizable pattern.  However, whilst it is a schizophrenic listening experience, there is something pleasantly disconcerting about the duo’s endeavour.

Yet discussing Album also raises a lot questions.  What if it had been recorded in a studio with professional grade equipment?  Could it possibly have been our generation’s Pet Sounds?  Would it have been an iconic album that defined the new millennium?  Instead, due to its rough avant-garde quality and Christopher Owen’s unrefined voice, Album never found a wide audience and was left orbiting the indie stratosphere enjoyed solely by a handful of musical connoisseurs.  So perhaps the most important question we should be asking is, what’s next for these guys, or should you say, Girls?