<img src="http://www.qromag.com/wp-content/uploads/2011/10/girlsfathersonholyghost.jpg" alt="Girls : Father, Son, Holy Ghost" /><br /> In the case of Girls, the infatuation with music history is as ambitious as it is endearing. ... 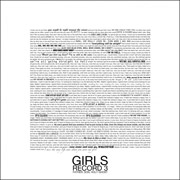 Let’s admit it: nowadays most, if not all, rock music is derivative.  It’s as if musicians wanted to state how much they love a certain genre of the past by trying to emulate it.  The beauty of it lies in the way some contemporary artists manage to interpret and re-elaborate last century music somehow creating their own peculiar style.  In the case of Christopher Owens and Chet ‘JR’ White, a.k.a. singer-guitarist and bassist-producer of San Francisco-based Girls, the infatuation with music history is as ambitious as it is endearing.

It’s by now common knowledge that Owens, the duo’s main songwriter, was raised as a member of the Children of God cult, which must have meant living a pretty secluded life, isolated from the pop culture young people are usually exposed to.  He said in more than an interview that in his youth he wasn’t allowed to listen to music, but through TV he managed to absorb the ‘60s-70s culture he seems so infatuated with.  In his lyrics and music there is a palpable angst, a repressed desire to be part of something, an ambitious, meticulous endeavor to recreate the music he loves by continuously referencing to it.

Click here for photos of Girls at Lincoln Hall in Chicago, IL on September 29th, 2011 in the QRO Concert Photo Gallery

If Girls debut Album (QRO review) was an homage to druggy ‘60s surf rock with a sound very similar to bands like Wavves (QRO album review) and Best Coast (QRO live review), their critically acclaimed sophomore effort Father, Son, Holy Ghost is more inspired by the grandiosity of the ‘70s, from its glam-rock to its progressive sonorities and the pomp of acts like Pink Floyd.  But there is much more than that: there are references to soul, blues, Buddy Holly, Elvis Costello (QRO live review), gospel, and of course still the beloved ‘60s.  The record is more varied, challenging, dense, filled with acoustic, minimalist guitars, strings arrangements, gospel organs and even flute solos.  Owens’ vocals are more emotionally charged, ranging from almost whispering to belting.  The poignant, heart wrenching lyrics (which play such an important role that they are featured in full as the album’s cover art) are both an open, desperate confession of Owens’ longing for love and a request for forgiveness and redemption: there is something so endearingly honest, devastatingly sincere about them.

The album opens with "Honey Bunny", a Beach Boys-esque song about self-deprecation ("They don’t like my bony body / They don’t like my dirty hair / Or the stuff that I say / Or the stuff that I’m on") that gives way to a sliding guitar and a brief moment of reflection, a personal lament about Owens’ mother before going back to the initial surf melodies.

"Alex" is a catchy pop tune that disguises serious, affecting lyrics about selfishness and how the world should be; the mainly instrumental "Die" begins as a fuzzy jam which with its aggressive guitars and dynamic drums reminds of Led Zeppelin and Hendrix as much as QOTSA and Muse (QRO album review), before getting all reflective and psychedelic.

Then "Father, Son and Holy Ghost" carries on with what could be considered a trilogy of stunning, despairing ballads that make this album so worth playing over and over again.  "My Ma" is a beautiful slow jam with George Harrison-inspired sliding guitars, central fuzzed guitar solo, gorgeous final female backing vocals and heartbreaking lyrics ("Oh God, I’m so lost / And I’m here in darkness / And I want to see the light of love / I’m looking for meaning in my life").  The first single "Vomit" still remains the masterpiece of the record, the one that best captures Owens’ loneliness and yearning; it has a very interesting, atypical structure around the many times repeated refrain "Nights I spend alone / I spend ‘em running round looking for you, baby," that breaks down three times: first to a despair-filled organ, then to a discordant Sonic Youth (QRO live review)-esque guitar solo, and finally to a theatrical conclusion where the repeated "Come into my heart" is backed by gospel singers, propulsive organ and swinging guitar.  "Just a Song" starts with a melancholic Spanish-style ukulele melody before Owens softly sings, "It just feels like it’s gone away / Seems like nobody’s happy now" over some violins that then become a proper orchestra with flute solos and other experimental sounds.

The album has a happy, sunny moment with the playful, poppy "Magic" ("You’ve chased my fears away / That’s why I’m sticking with you / Nobody makes me feel better"), but then precipitates into despairing tones again with the fantastic "Forgiveness", which is similar to "Vomit" in both its scale and atypical structure: beginning with a minimalist arrangement of acoustic guitar and electric piano it then slowly builds up and culminates in a ‘70s bombast of cutting guitar lines, hypnotic drums and keyboards noises.  Things come to a melancholic, subdued end with the doo-woop-meets-‘60s-soul "Look Like a River" and the sweet "Jamie Marie", another slow-building ballad about lost love with final gospel organs.

The shifts between the songs are sometimes a bit too dramatic and some may complain that the record doesn’t always come together as a unit, but that’s actually the beauty of it: it’s like an emotional rollercoaster that Owens is a victim of and gets the listener involved in.  Thanks to its endearing sincerity, its ambitious sonic density, and both Owens and White’s music skills, Father, Son, Holy Ghost is definitely one of the albums of the year.