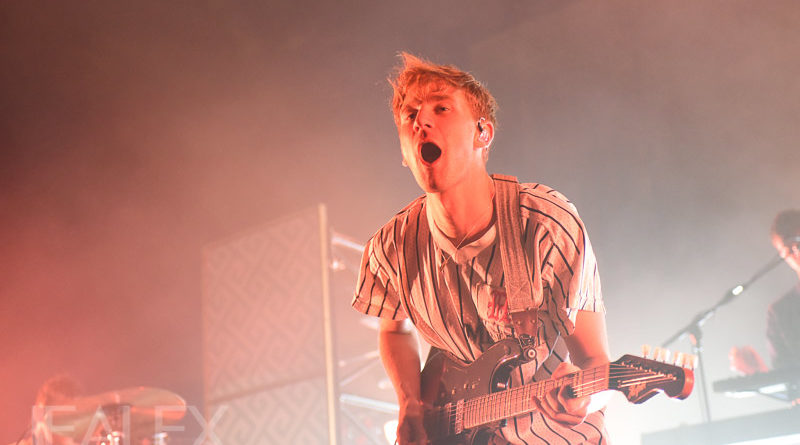 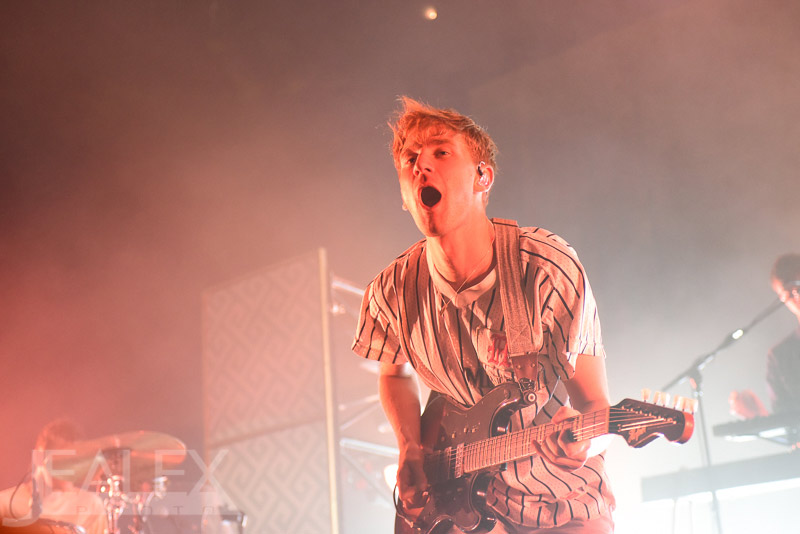 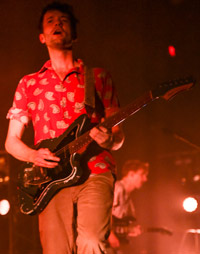 Highly acclaimed synth pop bands Glass Animals and Jagwar Ma brought a youthful sexy vibe to the unexpected confines of ACL Live at the Moody Theater in Austin on Monday, April 10th. Changing venues mid-day from the Stubb’s Waller Creek Amphitheater due to a severe weather forecast did not stop the school night dance party that ensued. Starting with the slow sensual burn of Jagwar Ma and then ending with a high-energy dance party showcasing Glass Animals and their pineapple-shaped disco ball. 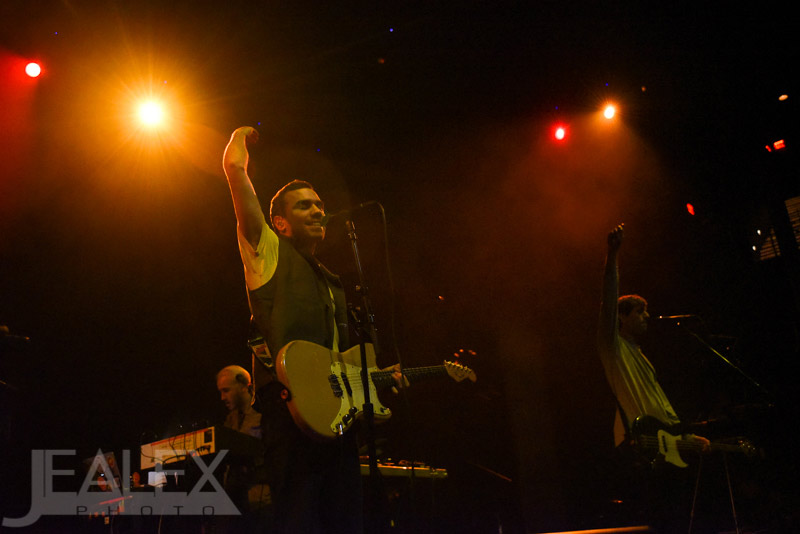 En route to Coachella with Glass Animals after a month buzzing around Western Europe, Australian trio Jagwar Ma kicked off their US tour with a 40-minute seamless journey of fuzzed-up and bassed-out beats accompanied by the soothing vocals of Gabriel Winterfield. The baggy-clothed frontman took the stage with “Loose Ends” from their impressive 2016 sophomore effort Every Now & Zen. The stacks of eight speakers drove bass all the way to the balcony and back as the crowd began to fill the theater. The beats that Jono Ma laid down were unparalleled in their execution, moving effortless between songs and then building up to fan favorite “Come and Save Me” from 2013’s Howlin that had people go crazy with their hands in the air. 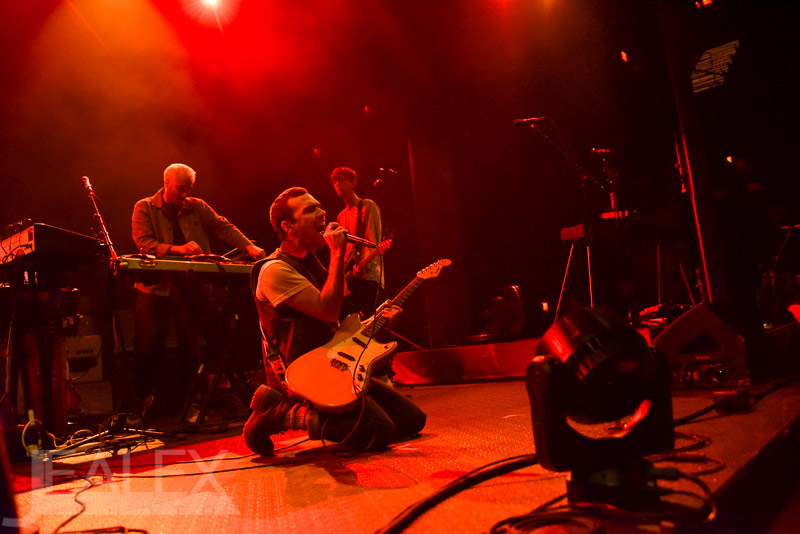 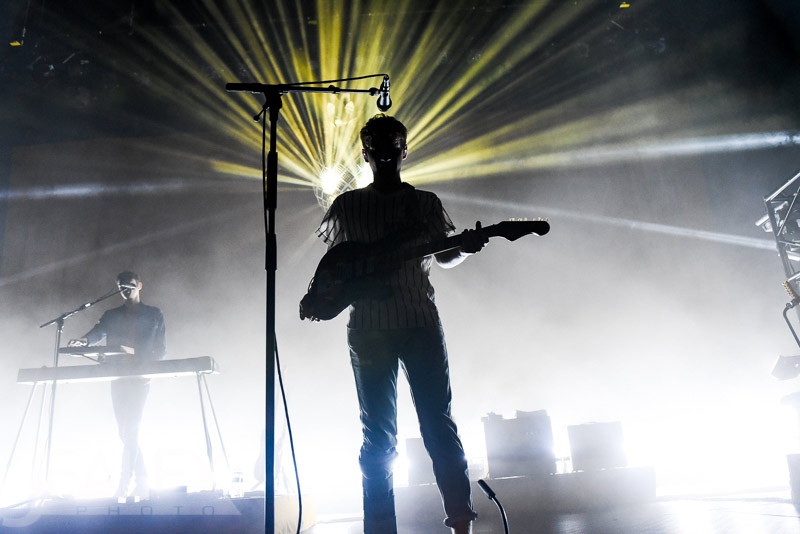 Click here for photos of Glass Animals at BAMCafé in Brooklyn, NY on November 29th, 2016 in the QRO Concert Photo Gallery

Click here for photos of Glass Animals at Terminal 5 in New York, NY on September 28th, 2016 in the QRO Concert Photo Gallery

Click here for photos of Glass Animals at The Box in New York, NY on February 25th, 2015 in the QRO Concert Photo Gallery

Click here for photos of Glass Animals at The Westway in New York, NY on May 15th, 2014 in the QRO Concert Photo Gallery

Two weeks of touring in South America took its toll on Glass Animals’ charismatic lead singer Dave Bayley. He explained on their Facebook page that, “During the first song of our last show in Chile, I managed to fall off a bit of staging. Something felt a bit funny in my leg, but I continued ‘dancin’’ like a maniac as usual and we finished the show. It was only after the set ended that I realized [sic] … I’d bloody broken my ankle!” Fear not, the band did not cancel any shows and Bayley managed to get the crowd pumped with some peg-leg dancing on their first song “Life Itself” from their 2016 album How To Be a Human Being, a faster tempo follow-up to 2014’s debut album Zaba. With over two years since their last show at Emo’s in Austin, the crowd was pumped to experience the catchy synth pop vibes of this popular quartet.

As the band settled in, Bayley took a seat on a stool to rest up his injured ankle, but the energy never subsided. The balance of Bayley’s sexy vocals, Drew McFarlane’s melodic keys, and Edmund Irwin-Singer’s dreamy guitars was exquisitely displayed on songs such as “Poplar St” and “Black Mambo”. As soon as the synth intro to “Gooey” started, the crowd erupted in cheers as expected – a huge hit that helped put Glass Animals on the map. While some in the crowd complained about the venue change, others welcomed it as the Moody Theater has some of the best sound and lighting in the city. The cavernous interior served as the perfect backdrop for the lightshow that accompanied Glass Animal’s performance especially during the encore song “Pork Soda” that featured a giant spinning mirrored pineapple that shot kaleidoscopic laser beams around the sold-out room. The two bands perfectly complemented one another and the audience experienced two performances polished through weeks of touring. Fans can catch Glass Animals and Jagwar Ma as they make their way out west to Coachella. 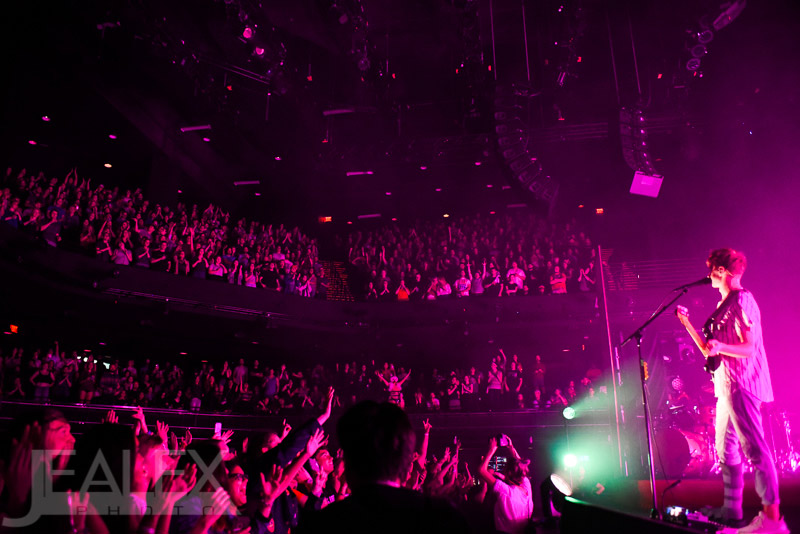