Glen Hansard played one of the few surviving Victorian music halls in England.... 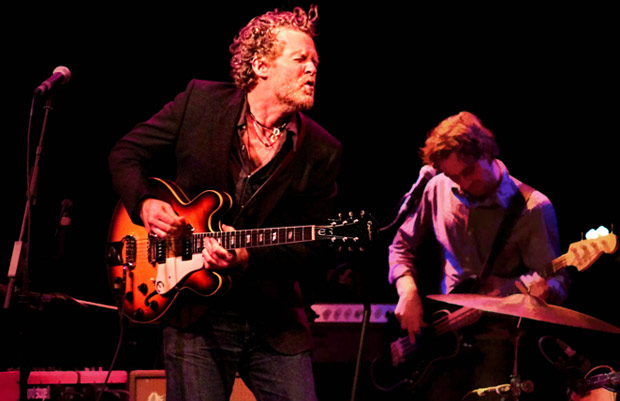 Click here for photos of Glen Hansard at Chumley Theater in Bloomington, IN on February 13th, 2015 in the QRO Concert Photo Gallery

Click here for photos of Glen Hansard at Millennium Park in Chicago, IL on June 27th, 2011 in the QRO Concert Photo Gallery

Click here for photos of The Swell Season at Prospect Park Bandshell in Brooklyn, NY on July 30th, 2010 in the QRO Concert Photo Gallery

The City Varieties Theatre in Leeds is one of the few surviving Victorian music halls in England.  The auditorium is decked out in red velvet and gilt trim, and rows of curtained balconies run down either side supported by cast iron columns; it played host to Chaplin, Lauder and Houdini.  It’s the kind of theatre that demands something special from performers and given his reputation for excellent live performance everyone was expecting a great show from Glen Hansard.  What they probably weren’t expecting, especially on a stage so small, was an eleven-piece band.  Who tours small venues with an eleven-piece band?  Well Glen Hansard does for one and the results on the night on Thursday, January 31st were truly spectacular.

In addition to the quotidian complement of percussion, bass, guitar and keyboards the band boasted a lead violin, a three-piece string section and a three-piece horn section.  As the stage filled at the start of the show there was an Edward Lear-ish sense that when all these creatures moved the noise would be truly wonderful.  And so it proved to be.  Versatile too, because having served as a full band for several songs, rearrangements during the night allowed them to function as a string quartet, an acoustic five piece and as a sixties hootenanny style folk ensemble – and that was in addition to the songs that Hansard played solo or with just the violin for accompaniment. 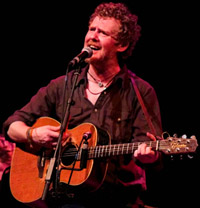 Hansard’s on-stage manner manages to be utterly relaxed and emotionally intense at the same time.  Between songs he is an engaging raconteur with a warm rapport with his audience (I’m not sure I ever remember seeing anyone cue five hundred community singers with a wink from the stage before), but while he can clearly spin a good yarn he does not choose to do so in his music – there is precious little narrative evident there.  These songs are all about strong emotions recollected, and when he sings he seems to have the knack of reconvening the emotion that made them happen and pouring it back into his delivery.

For the audience this made for an evening of remarkably potent performance but Hansard seemed to be thoroughly wrapped up in the songs too.  Sometimes he leaned into the microphone, ever so slightly on tiptoes, closed his eyes and smiled between stanzas, sometimes he bounced and duck walked, held his guitar machine gun style and twisted himself almost into improbable shapes as the band took over and let rip.  Musically the evening was remarkable for the imagination of the arrangements, with the band switching from the softest of accompaniments to maximum volume and then back to near silence at the drop of a hat, Hansard using a loop and the echo from his guitar sound box to create strange cascading animal soundscapes on Leave or detuning the bass string of his guitar while playing “Astral Weeks”.  Sometimes the band became so discordant and febrile that they seemed to be summoning the spirit of “A Day In the Life”, while for the closer they arranged themselves ‘Muppet style’ in a row at the stage front and delivered Blakeslee’s protest classic “Passing Through”, complete with New Orleans jazz styling. 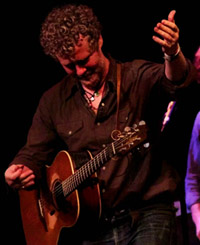 Opening with four songs from 2012’s Rhythm and Repose, including the lovely “You Will Become” and the Neilson-esque “Maybe Not Tonight”, the evening featured songs from throughout Hansard’s career including “Low Rising and “When Your Mind’s Made Up” from his time as half of The Swell Season (QRO photos), and “In These Arms” and “Santa Maria” from The Frames.  A version of Van Morrison’s “Astral Weeks” was a highlight as was “Octopussy”, performed in Leeds as a tribute to local favourite David Gedge of The Wedding Present (QRO live review), but it was of course the 2007 Oscar winner “Falling Slowly” which brought the biggest response from the crowd. 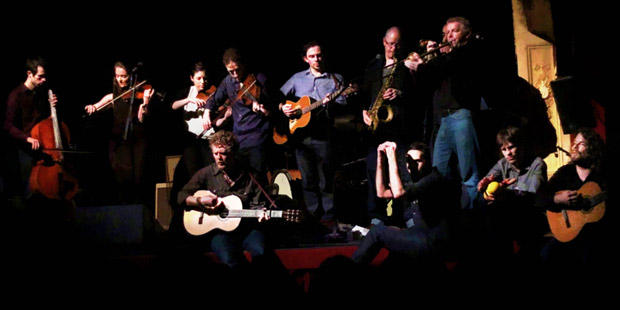 Landlady – “Above My Ground”