<img src="http://www.qromag.com/wp-content/uploads/2011/12/gobblegobbleboringhorror.jpg" alt="Gobble Gobble : Boring Horror EP" /><br /> Gobble Gobble may have changed their name to Born Gold, but 2011 ain't over yet and there is still... 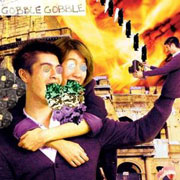 Gobble Gobble may have changed their name to Born Gold, but 2011 ain’t over yet and there is still one great GG release to review before we all turn the page: Boring Horror, a sweet little 12" released on the French label Debonton.  Gobble Gobble’s righteous electro-pop attack is a bit outside the label’s techno wheelhouse, but the band proved during their ‘anytime, anywhere’ continent-stomping Infinitour that Cecil & company can fit on just about every crazy bill you can imagine.  Gobble Gobble was a full-service mobile party.  Born Gold is bound to bring the same energy…

Boring Horror is built on the two main pillars of "Boring Horror" and "Boring Horror (Sundance remix)".  The original track is available on the Born Gold debut Bodysongs, but it benefits from a deeper treatment on Boring Horror.  Gobble Gobble had a great gift for the remix re-imagining.  Remixes are almost a dirty word these days in certain circles.  Chalk it up to the overweening fatigue of the 24-hour mp3 cycle.  But we all know remixes have their proper use – and an artist re-imagining his or her own work is one of the best uses available.  The 12" is a nice little jaunt through the Gobble Gobble inner atmosphere.

Bonus track "Seizure to the Metronome" is a nice addition, and the album as a whole is a treat for fans that have made a habit of picking up the musical breadcrumbs Gobble Gobble has dropped along the path.  Dynamite beats, limited edition, rare tracks – although, at around 20 minutes of music and an ocean’s distance away, the record is for vinyl nerds only.  And with that… let’s say goodbye to Gobble Gobble and hello to Born Gold!