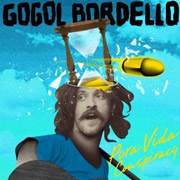 Gogol Bordello came in like a breath of fresh air in 2005 thanks to breakthrough Gypsy Punks: Underdog World Strike, with quite literally a multi-cultural ‘gypsy-punk’ sound.  And then they breathed that air again with 2007’s Super Taranta! (QRO review), and again on 2010’s Trans-Continental Hustle (QRO review) – to the point that they really started repeating themselves.  Not only that, but their singular sound was becoming a little less singular, as gypsy styles started making their way into the indiesphere, though usually either married to electronics (see Yeasayer – QRO spotlight on) or classical (see Beirut – QRO album review).  Gogol Bordello hasn’t reinvented themselves on Pura Vida Conspiracy, but have gotten a bit more serious.

Click here for photos of Gogol Bordello at Sound Academy in Toronto, ON, Canada on May 27th, 2012 in the QRO Concert Photo Gallery

Click here for photos of Gogol Bordello at 2011 Sziget Music Festival in Budapest, Hungary in the QRO Concert Photo Gallery

‘Serious’ is still a hard word to attribute to the wild antics of the gypsy punks, but frontman Eugene Hutz advocates more than just the starting to wear the color purple on songs like “Lost Innocent World” and “John the Conqueror (Truth Is Always the Same)”.  The band doesn’t just do big rabble-rousers like those two or fitting opener “We Rise Again” – there’s the slow/fast gypsy storytelling of “Malandrino”, the sea shanty-ish “It Is the Way You Name Your Ship”; they even go acoustic accordion with “Amen” and guitar in closer “We Shall Sail” (which unfortunately has a hidden ‘metal Gogol’ song afterwards).  However, the big rabble-rouser is their strongest side – “My Gypsy Auto Pilot” will certainly get feet stomping.

Gogol Bordello still sound more like Gogol Bordello than anyone else on Pura Vida Conspiracy, but they don’t need to reinvent themselves, just refine, which they have done on their new album.