<img src="http://www.qromag.com/wp-content/uploads/2010/06/gogolbordellotrans.jpg" alt=" " />Criticizing a band as singular as Gogol Bordello for not evolving is a little harsh, because they're already far out there, and any further... 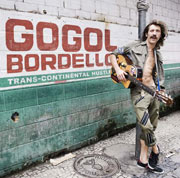 There are few, if any acts out there in modern music today that sound like Gogol Bordello.  The self-proclaimed ‘gypsy punks’ combine gypsy, near-Klezmer stylings with catchy punk, and throw in pinches of country, salsa, and more into the mix as well.  This made them something of a revelation, certainly a breath of fresh air, back in 2005 with Gypsy Punks: Underdog World Strike and breakthrough single “Start Wearing Purple”.  But that was five years ago, and while 2007 follow-up Super Taranta! (QRO review) was enjoyable, it also felt a bit like more of the same.  And now, with major label debut Trans-Continental Hustle, their sound is even less remarkable – but it still sounds like no one else.

Click here for photos of Gogol Bordello at Sound Academy in Toronto, ON, Canada on May 27th, 2012 in the QRO Concert Photo Gallery

Click here for photos of Gogol Bordello at 2011 Sziget Music Festival in Budapest, Hungary in the QRO Concert Photo Gallery

From up-gypsy stomp opener “Pala Tute” to the gypsy-country-road party finish title track, Trans-Continental Hustle kind of blends together into one gypsy outing.  Supposedly influenced by singer/guitarist/frontman Eugene Hutz’s time in Brazil (where he has lived since 2008), there are probably diverse stylings from that diverse nation in the record, but with it already being relatively ‘out there’, only hardcore Gogol/gypsy devotees will pick up on them.  Trans-Continental does have a bit more of the ‘on the long trail’ to it, like the riding “My Companjera”, “Rebellious Love” and “To Rise Above” – the band seems to be in less of an urban ghetto like Gogol Bordello’s Lower East Side origins, and more of the immigrant trails of America’s west (or Brazil’s north – see “In the Meantime in Pernambuco”).

And Gogol Bordello are band that are better when they go bigger, such as “Purple”, Taranta!‘s “Wanderlust King”, or Hustle standout “Immigraniada (We Comin? Rougher)”.  Along with party/pressing “Break the Spell”, those two tracks come out clear ahead of other, relatively forgettable pieces like “Una Menina Uma Cigana” or “Last One Goes the Hope”, not to mention the stripped-to-traditional “Sun on My Side” or “When Universes Collide”.  A band better known & loved for their lives shows (QRO review), and who always overstuff their records, it’s easy to tell which tracks on Hustle will be live staples – and which won’t.

Criticizing a band as singular as Gogol Bordello for not evolving is a little harsh, because they’re already far out there, and any further movement might be hard to see from where you’re standing.  The only competition that Gogol Bordello have is themselves.