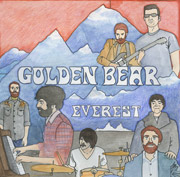 Straddling the indie-rock/indie-pop divide with emotion and brightness can be a little dangerous, as one risks either being run-of-the-mill or, worst fate of all, emo.  Yet Austin’s Golden Bear (guess them being from California would have been too obvious…) have managed to avoid that fate with their first two records, 2006’s Golden Bear and 2007’s To the Farthest Star (the latter earning them a ‘Band to Watch in 2007’ from The Onion).  Their indie-pop could start to feel like a little bit of a retread, but thankfully on Everest EP they’ve matured a bit more, though not yet to ‘stand out’ levels.

Everest is best at its beginning and end: opener “Night Lights” borders indie-pop and indie-rock with winning guitars, while closer “Miracle Mile” doesn’t just reach for a grand atmosphere, but also is grounded in good, regular alt-rock.  In between on the five-song EP, the slacker title track is relatively forgettable, while “Future Blues” employs too many changes, getting away from its catchy start.  “All the Stars” is a sort of childhood epic, with nice horns, that’s mostly not emo…

The young Golden Bear needed some growing up to make more of a mark, and Everest does signal that, which is about all you could hope for from an EP.