In addition to being a terrible time right now for everybody, it’s also just a very weird time.... 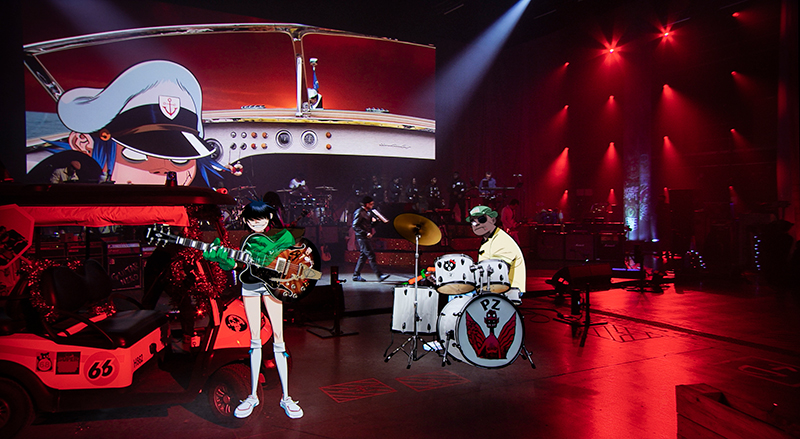 In addition to being a terrible time right now for everybody, it’s also just a very weird time.  Some things we can’t do anymore. Other things, we’re doing more than we ever did before. Being inside & online is actually good for you right now, don’t go out and experience things in real life.  It is the best of times for Zoom, it is the worst of times for concerts. So, this is the exact right time for the most successful virtual band in the world, Gorillaz, who played three special livestreams December 12th-13th.

There were three livestreams for three time zone areas, first one for Asia, then the Americas, then Europe/Africa. While some artists have done two livestreams for different parts of the world, this might have been the first to do three, because Gorillaz is nothing if not a global outfit. The project of Blur singer Damon Albarn and multimedia artist Jamie Hewlett, Gorillaz recruits guest stars for each song, and they’re ‘performed’ by animated musicians 2-D, Murdoc Niccals, Noodle, and Russel Hobbs. From their 2001 breakthrough hit single “Clint Eastwood” and on, Gorillaz has been a singular sensation even as its ranged musically. This year saw the release of Song Machine, Season One: Strange Timez (QRO review), with its own videos & special guests.

It’s always been tricky for the band to perform live, since one can never get all the guests in the same place at the same time, at best one-off one-shot guests (like when Del the Funky Homosapien reprised his “Clint Eastwood” rap with Albarn at South-by-Southwest 2014 – QRO photos). But a few worldwide livestreams is the perfect time to ‘get the band back together,’ with numerous guest appearances (it’s not like anyone has anything else to do), plus incorporating Hewlett’s animation right on the same screen. In short, this might be the wrong time for everyone else, but it’s the right time for Gorillaz.

The American livestream [the one your correspondent watched] was stacked with special guests, right from the get-go with The Cure’s iconic Robert Smith opening the show on his Song Machine opener “Strange Timez”. Yes, the performance was focused on the new album, one of the few things that was actually ‘normal’ about this show. But it’s not a normal show when you start with Robert Smith and then go into Beck on his funky Song Machine contribution, “Valley of the Pagans”.  It was the same one-two-three open as Song Machine with “Timez”, “Pagans”, then “The Lost Chord” with Leee John, only this was them all live.

And this show sure seemed to be live, a major point of debate with many of today’s livestreams, which are often filmed previously then edited & put up. But Gorillaz has the pull to get the big stage and the big camera crew to make it all feel like you’re at a big live show. It was so big a stage as to include back-up singers, who also did well as excited fans (the one thing the show obviously lacked – there was no general chat, probably too many people & too many languages, but one could have a virtual ‘room’ with up to four of your friends). It was so big that the big screen behind them all fit in nicely, even when guest stars were only up on there – though a few times the virtual guests even appeared as on-stage holograms, Tupac style, such as JPEGMafia for “MLS” and Fatoumata Diawara on “Désolé”, the latter seeing Albarn duet with the Diawara of the near future. Meanwhile, Elton John was turned into a full-fledged Gorillaz animated character for “The Pink Phantom”, because if anyone should become a cartoon, it’s Elton John.

Albarn did have on his own Elton John sunglasses (and had a painting of Little Richard in front of his keyboard), commanding the stage when he needed to, but also nicely playing second fiddle to his guests when that was called for. For instance, rapper Slowthai absolutely crushed it when he stepped forward for “Momentary Bliss”, Albarn nicely working with rock duo Slaves behind him until they all got together at the end of the song. Even non-singers like famed bassist Peter Hook and drummer Georgia got ample screen time with “Aries”. 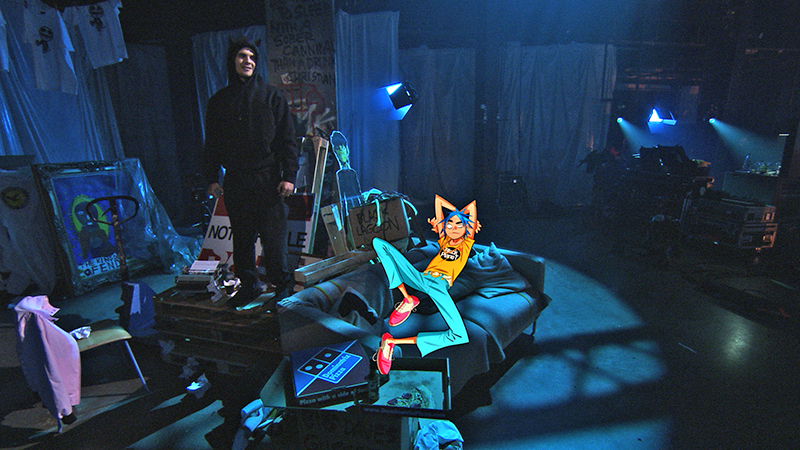 Also getting screen time? Murdoc and 2-D. The virtual band members had their pop-ups on stage & screen, such as in “Aries”, but extra special was that Murdoc & 2-D were watching the monitors, as the whole event was billed as taking place in the basement of their place, Kong. The sweet 2-D didn’t even know they had this big space downstairs, even though Murdoc had thrown a rager there for 2-D’s birthday last year – because Murdoc had forgotten to invite the birthday boy (“That’s my bad…”), who instead had done a jigsaw alone in his room. Murdoc later remarked that he enjoyed watching “the puppets play,” while he saved his energy for the after show, until 2-D remarked that there aren’t any after shows right now, but he & Murdoc could still finish his jigsaw (Murdoc was not amused).

While Song Machine dominated the show, it wasn’t all. Albarn recruited none other than Steven Toast himself, What We Do In the Shadows’ Matt Berry (who released his own record this year – QRO review) for a recitation from Albarn & Hewlett’s stage adaption of Monkey: Journey To the West (QRO review), maybe the sweetest guest star of all, since he was so unexpected. 2005’s Demon Days got its own special section, as Albarn & his band got up close & intimate (Christmas tree included) for “Last Living Souls” and the title track, plus “Dracula” from the 2002 b-sides compilation G-Sides. And the evening ended with, what else, “Clint Eastwood”, Albarn starting solo with his “good friend,” his omnichord, before closing it out with full band and rapper Sweetie Arie.

Hope is on the horizon, from approved vaccines to artists announcing 2021 tour dates. One obviously hopes to see Gorillaz in-person someday soon, in a massive arena or headlining a big festival (QRO photos headlining a big festival). But this livestream wasn’t just something to hold you over until then, something to keep the band employed. It might have been the virtual Gorillaz at their most real. 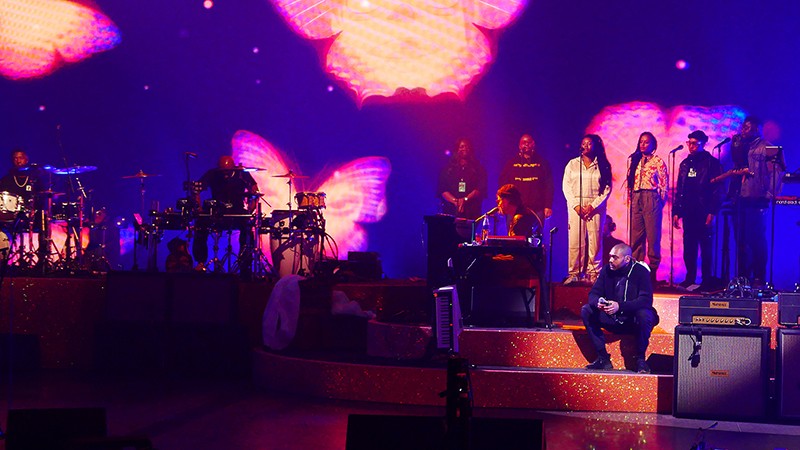 Lanterns On the Lake – The Realist EP