The now now now is 2020, so naturally Albarn has recruited another murder’s row of musicians for his “episodes” that have made up the impressive 'Song Machine, Season One:... 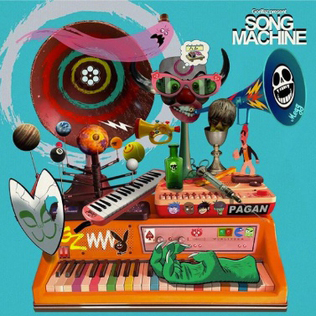 Gorillaz has long been Damon Albarn’s fascinatingly experimental project, a virtual band of cartoon characters and a slew of guest stars.  It’s waxed and waned with Albarn’s other commitments, and his relationship with non-virtual member, artist Jamie Hewlett.  After the overload of star contributors on 2017’s Humanz (QRO review), Gorillaz stripped back in the following year’s The Now Now (QRO review).  But the now now now is 2020, so naturally Albarn has recruited another murder’s row of musicians for his “episodes” that have made up the impressive Song Machine, Season One: Strange Timez.

While the virtual band from the near future is based on tech sounds from that future, Gorillaz has long wandered genres with its intentions, maybe never more so than with Strange Timez.  The titular opener well uses the impeccable voice of none other than The Cure’s Robert Smith in new ways, while of course Albarn recruited grime rap all-star Skepta for the closer “How Far?” – along with Afrobeat founder Tony Allen (a regular collaborator, Allen tragically passed away in April).  Funky Beck meets dancey Albarn in “The Valley of the Pagans”, while JPEGMafia delivers the most memorable rhymes on a record full of them with “MLS”.  While not every track is a standout – one might have hoped for more from working with St. Vincent than the charming “Chalk Tablet” – every track has something to say, even at seventeen of them.  And any record that can combine 6LACK’s vocoder rap with Elton John’s natural pipes (“The Pink Phantom”) has accomplished something.

With musicians around the world having time on their hands, this pandemic lockdown has been a golden time for guest appearances, side-projects, experiments, and non-in-person performances, all Gorillaz stock-in-trade.  Yet Albarn has still exceeded himself in these Strange Timez.

The Strokes – “The Adults Are Talking”