<img src="http://www.qromag.com/wp-content/uploads/2011/01/gorillazthefall.jpg" alt=" " />Damon Albarn's Gorillaz<span style="font-style: normal">, 20 iPad Apps and a handful of guests take us on an intimate journey across America.</span> ... 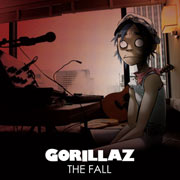 These days, recording a 15-track album in less than a month is quite a challenge.  Add the fact that each track is recorded in a different city while touring North America.  And now imagine doing all that in a 9.5″ by 7.5″ studio (yes, these are inches).  It really starts looking like an incredible feat.  And it is.

But the real feat that Damon Albarn was able to pull off with Gorillaz fourth opus The Fall is more than just wise use of modern technology.  He, 20 iPad Apps and a handful of guests take us on an intimate journey across America.  Fall starts marching down Montreal with a “Phoner to Arizona” and ends with a brief, tired, and demented “Seattle Yodel”.

What is also remarkable about the last two albums from Gorillaz is the absence of guest vocals.  All but one song are performed by Albarn, which lends a cohesion that the perpetual showdown of stars called Plastic Beach lacked, without slipping into monotony.  Each rhythm, from the very electronic “Detroit” to the Texas waltz in “The Parish of Space Dust”, each sample, whether from conversations, TV newscasts or even train station announcement like in “California & The Slipping of the Sun” and each instrument are researched and assembled with the precision of clockwork.

Gorillaz’ video for “Phoner to Arizona”:

Special mention of Bobby Womack who, after appearing several times in Plastic Beach, treats the listener to an ethereal blues on “Bobby in Phoenix”.  His rough guitar strumming contrasts with his crooning voice to put the listener in the mood (yes, that mood).

For those who are familiar with the Coors Light commercial where Dr. Dre creates beats in a plane, it is only a short stretch of the imagination to think of Damon Albarn building The Fall on his iPad on his tour bus.  It is, however hard to believe it took only a month to tie it up, as it never sounds cheap, thrown together or rushed.  It is the emotional journey and encounters of a musician on tour and it is almost a shame that Gorillaz is offering it for free on their site.