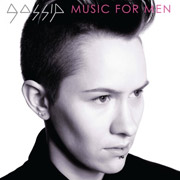 Gossip naming their latest ‘Music For Men’ is obviously ironic, considering how female their audience is, and the band’s iconic status in the lesbian community.  But their electro-dance sound, which favors a simpler rock underpinning over too complicated techno, has proved influential no matter the gender, and stays that way Music, their first major label studio album (after last year’s Columbia debut, Live In Liverpool – QRO review).

The rock underpinnings are actually starkest in Music’s opener, "Dimestore Diamond", which brings an almost blues-y procession behind singer Beth Ditto’s signature dance-diva vocals.  It’s a bit like what you liked best about The Dead Weather’s Horehound (QRO review) – Jack White’s (of The White Stripes – QRO live review) rhythm & Allison Mosshart’s (of The Kills – QRO photos) voice.  But Gossip is still mainly a dance-rock band, and that still holds on Music.  If anything, it holds a little too much, as the middle of the record starts to feel unremarkable.

But Gossip are able to lift it nearer the end by employing some restraint on such tracks as "For Keeps" and especially "Love and Let Love", whose more removed, nighttime feel is matched well in press & vocals.  That press is Gossip’s not-so-secret weapon, from "Dimestore" to "Four Letter Word", which uses it to improve their electro sound.

Gossip have been bringing the unapologetic diva back to alt-electro-rock, and ladies like Karen O (of Yeah Yeah Yeahs – QRO album review) owe them a debt of gratitude.  That diva-ness might put off some of the XYs, but a few spins of Music For Men can win even them over.