More Click here for photos of festival sights from 2013 Governors Ball in New York, NY in the QRO Concert Photo Gallery It was the best of times; it... 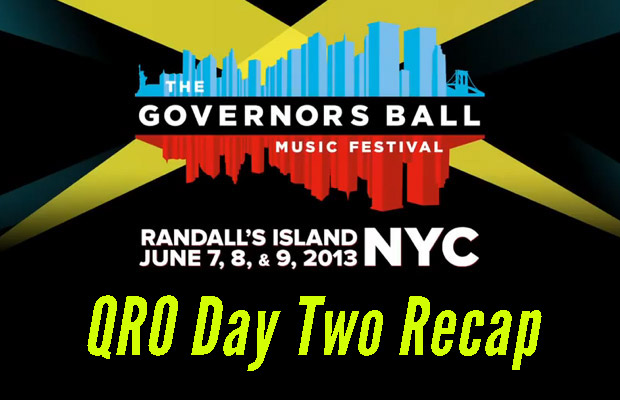 Click here for photos of festival sights from 2013 Governors Ball in New York, NY in the QRO Concert Photo Gallery

It was the best of times; it was the worst of times.  Governors Ball 2013 had constructed a killer line-up, expanding to a third day and two more stages on Randall’s Island (after a two-day, two-stage 2012, and one-day, one-stage event on Governors Island in 2011).  Name another festival that had Kanye West and Guns n’ Roses – not to mention the return from lengthy hiatus of Kings of Leon?!?  Oh, and it’s located within New York City, just a short shuttle bus away from the 4, 5, and 6 subway lines?  It seemed like an embarrassment of riches. 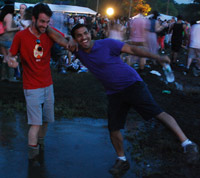 And then God intervened, with rain on the first day that turned into a storm, cutting the evening short.  And that rain water turned the ground into mud for days two and three, ruining the festival grounds.  Adjustments were made – Kings of Leon moved their Day One headlining set into Day Two, hay was put on the mud to solidify the ground somewhat for Day Three.

A decidedly up-and-down affair, Governors Ball 2013 was still something to behold and experience – ‘I was there when,’ Friday to Sunday, June 7th to 9th.

Day Two of Governors Ball started with some serious good news: Kings of Leon, whose headlining set on Day One had been cancelled due to the storm, managed to get rescheduled for Day Two.  This of course moved lots of other artists around (down to Day Two opener Moon Hooch, who’d previously graduated from busking at the ferry dock to go to Governors Ball the last two years), but hard to complain with your own schedule of ‘who to see’ getting rearranged. 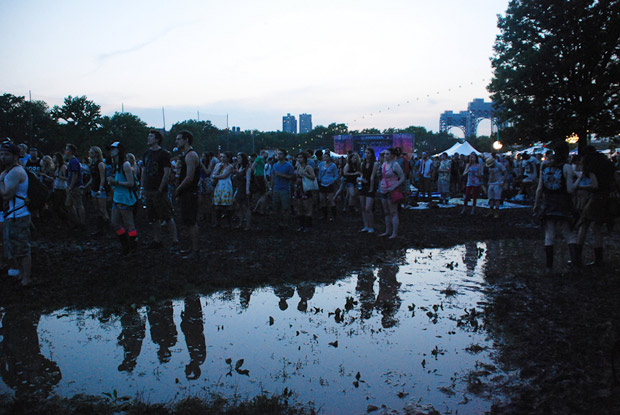 Besides, your schedule was thrown out of the window entirely once you got to Governors Ball, and saw & experienced what everyone was unfortunately mostly talking about: the mud.  This wasn’t ‘a little wet dirt at the bottom of your shoes,’ no, this was the kind of mud where you could lose a shoe, or even a boot (god help you if you were wearing flip-flops…).  And it went on forever.  In expanding from two to four stages, Governors Ball doubled the physical size of the festival grounds, and nearly all of it was on what had once been grass but was now deep, thick mud.  There was none of it until you got into the festival and left the initial paved entrance – at first it was a funny planning exercise in trying to get from one spot of hard (or, at least, not as soft) ground to another, but then it just went on and on.  And this was just from the entrance to any one stage – you had to go through it again to go to any other stage (double if you were going from one of the two newer stages to one of the two from last year), and repeat each time you changed stages.  And don’t forget that you’d be standing in mud when you were watching any stage (though there were a few precious paved areas, like in front of the main stage), or going to any stall for food or drink or anything else.  And then there were the port-a-potties…

Okay, enough bitching – on to the music… 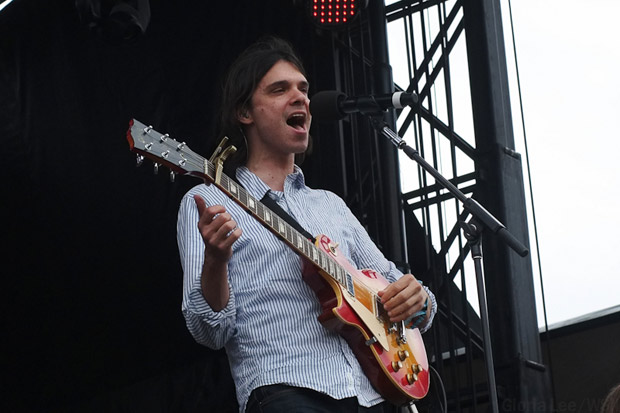 Photos of Japandroids at SXSW 2013 in Austin, TX

Like on Day One, the environment (this time the ground, not the sky), limited the appeal of the first acts of the day – it was a little hard to dance to Robert DeLong or relax to Wild Nothing after the shock of the grounds.  But then came two clear standouts of the festival: Icona Pop and especially Japandroids.  The Swedish girl duo Icona Pop belted out their hit electro single “I Love It” with particular abandon – chorus of “I don’t care!” worked well for those who’d given up trying to stay even somewhat dry & clean and just took their shoes off and accepted the mud.  Meanwhile, the Canadian guy duo Japandroids equally belted out their uplifting punk rock from last year’s amazing Celebration Rock (QRO review) – not to mention jokingly introducing themselves as Guns n’ Roses (see below) and saying how happy they were to be opening for Japandroids (then later dedicating a song to current GnR bassist Tommy Stinson – QRO solo album review – because he’d been in a great band in the eighties & nineties – QRO re-releases review, in case you didn’t know…). 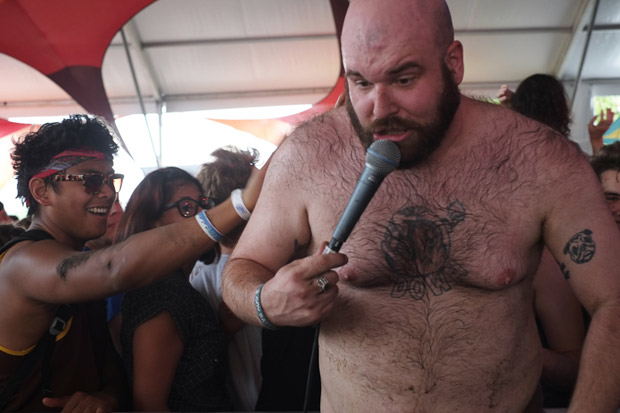 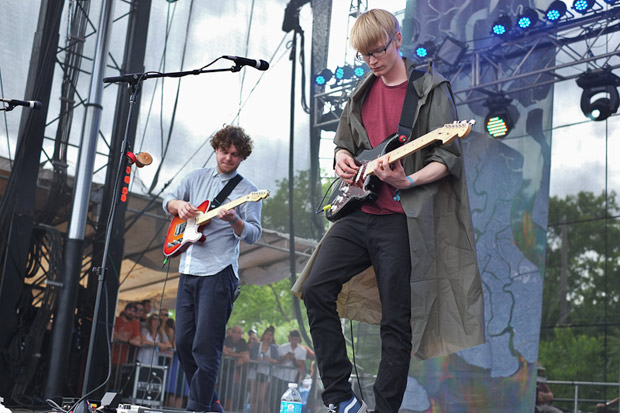 Photos of Fucked Up at 2009 Pitchfork Music Festival in Chicago, IL

Photos of Fucked Up at Williamsburg Waterfront in Brooklyn, NY on July 12th, 2009

Photos of Dirty Projectors at Bijou Theatre in Knoxville, TN on August 11th, 2012

Photos of Dirty Projectors at Emo’s East in Austin, TX on August 2nd, 2012

QRO’s review of Dirty Projectors at Aladdin Theatre in Portland, OR on September 29th, 2010

Photos of Dirty Projectors at 2010 Sasquatch! in George, WA

Photos of alt-J at 2012 Tramlines Festival in Sheffield, U.K.

QRO’s review of Cut Copy at Wonder Ballroom in Portland, OR on October 9th, 2011

Photos of Cut Copy at Williamsburg Waterfront in Brooklyn, NY on August 8th, 2010

In general on Day Two, there were the bands that naturally worked with the mud, and those that naturally didn’t.  Dirty Projectors were too pretty and intricate to be experienced in deep, dank dirt, but Fucked Up were almost too appropriate, with singer Damian Abraham of course going into the photo pit and crowd with his shirt off and belly out (though when even he thinks something is too disgusting, that’s saying something…).  Overnight U.K. hit alt-J were too chill (generally speaking, hipster favorites faired less well than those with wild young fans), but Cut Copy had the benefit of pavement at the main stage and a longer danceography. 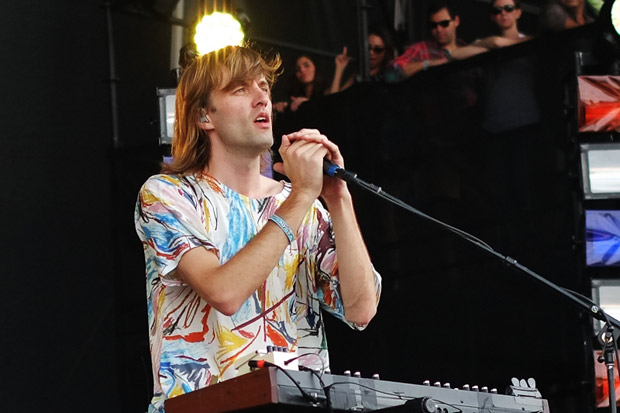 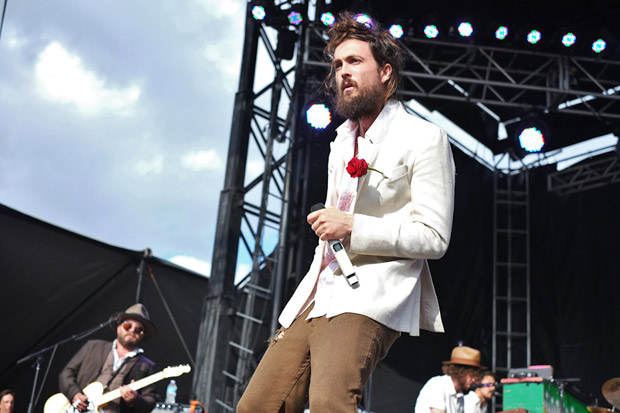 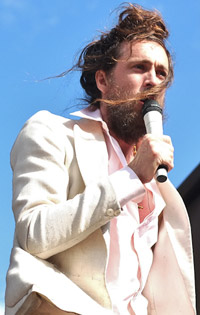 Along with Japandroids & Fucked Up, a band perfectly suited for the mud on Day Two was Edward Sharpe & The Magnetic Zeros.  Yes, singer/frontman Alex Ebert went into the photo pit multiple times (like he always does, even early on, even at festivals – QRO photos), but there was more.  He asked for requests from a super-excited crowd who had no problem with the Woodstock-like mud for this ‘modern hippie’ band.  And during the conversational portion of single “Home”, where he and Jade Castrinos usually tell a story, he asked fans for a story by passing the mike to some girls up front.  Of course, all the girls could do was say how much they loved the band (the relative best comment was wishing someone a happy birthday), so Ebert eventually had to take the mike back, but there was still a sing-along for this band with ultra audience engagement (and love). 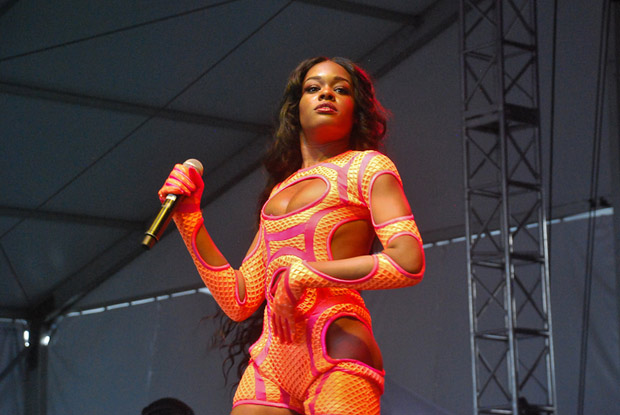 Click here for photos of O2 Academy in Leeds, U.K. on February 15th, 2012 in the QRO Concert Photo Gallery

Click here for photos of Kings of Leon at Roseland Ballroom in New York, NY on June 5th, 2007 in the QRO Concert Photo Gallery

While Azealia Banks and then Kendrick Lamar came out in full force (especially the former, for whom this was a hometown show – including doing the ‘Harlem Shake’), Kings of Leon had their make-up performance on the main stage.  After many fans had waited so long in the hard rain the night before, for a band that’d been on hiatus for a few years now, it would have been awful if Kings couldn’t have performed at all.  And credit the band for putting their egos in check and taking the not-headlining slot (admittedly the main stage slot before the headlining slot, and no one was gonna move Axl…).  The group debuted the new (appropriate for the prior day) song “Supersoaker” from their long-awaited next record, but of course it was old singles that were the fan favorites – lots of girls in Indian headdresses (and not a whole lot more, under the hot sun) dancing to “Sex On Fire”… 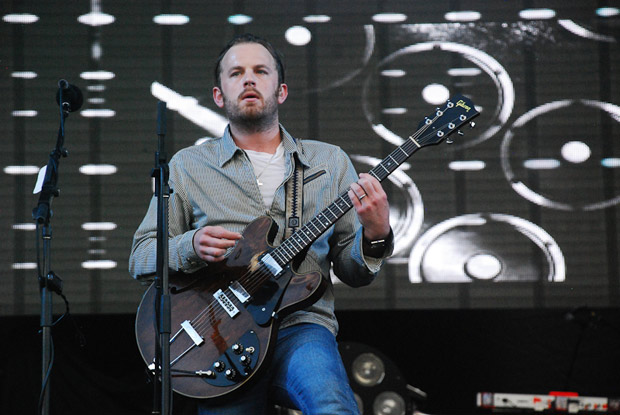 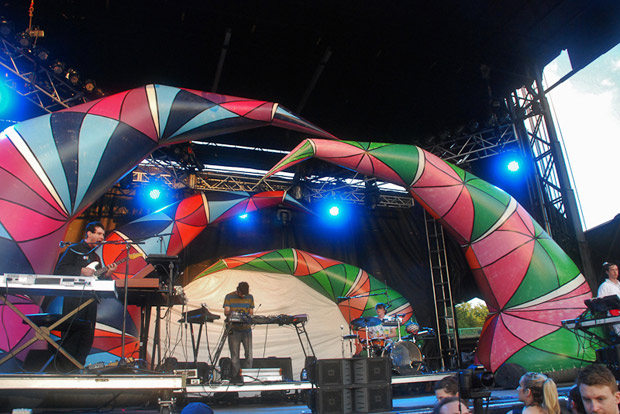 Click here for photos of Animal Collective at The Backyard in Austin, TX on September 28th, 2012

The experimental-tropical Animal Collective didn’t sound like what you thought Animal Collective sounded like at first, with some harder sounds (or maybe it was just the sound system), but did eventually get tropical, then tropical-experimental.  They’re a few years removed by now from their big hit, 2009’s Merriweather Post Pavilion (QRO review), and while they retreaded a bit with last year’s follow-up Centipede Hz (QRO review), they have been working to improve their live show (which always had a reputation for being less impressive than their recorded output).  That’s been especially important at festivals like Governors Ball, as the band doesn’t have their indoor light shows (QRO photos indoors with their light show) outdoors in the sun (QRO photos outdoors in the sun), but at least the sun was setting as they played. 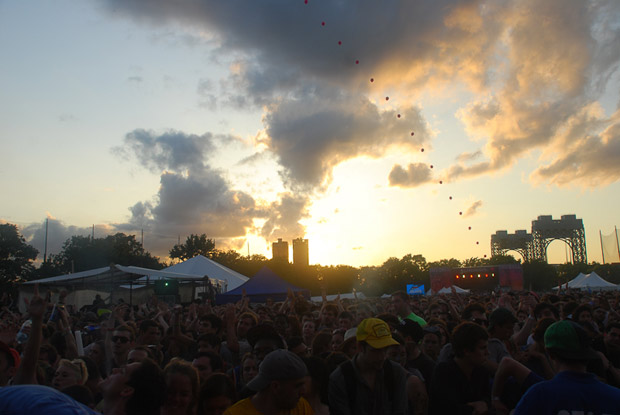 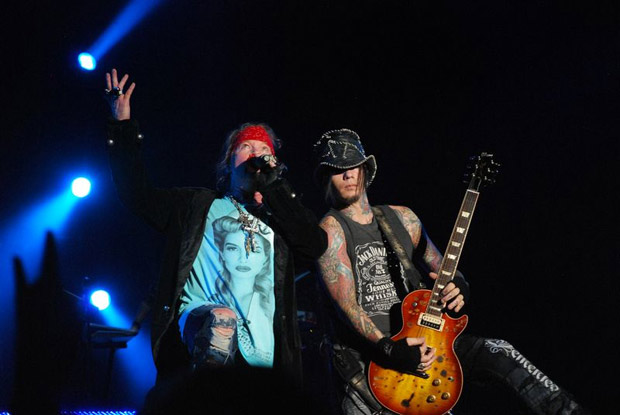 Axl Rose has gotten a lot of flack for even calling his band ‘Guns n’ Roses’, considering that it has no members of the original iconic outfit besides him (no Slash – QRO live review – no Duff McKagan – QRO photos at a festival – not even Celebrity Rehab mainstay Steven Adler…).  It’s been almost as much flack as he got for taking fifteen years & fourteen million dollars to make Chinese Democracy – and does anyone remember anything about that 2008 album other than how long it took & how much it cost (like, any of the songs?…)?  But Axl & co. (and every band is better with Tommy Stinson…) combated the naysayers at Governors Ball.  First off, the band actually started early – only a handful of minutes early, true, but from a band/artist notorious for late starts, that was a very good sign to start.  And the group played GnR’s many, many hits – including, yes, “November Rain” (if a day late/five months early…).  If you were there for Guns n’ Roses, if you endured the mud & the day, you could not say the artist/band didn’t deliver. 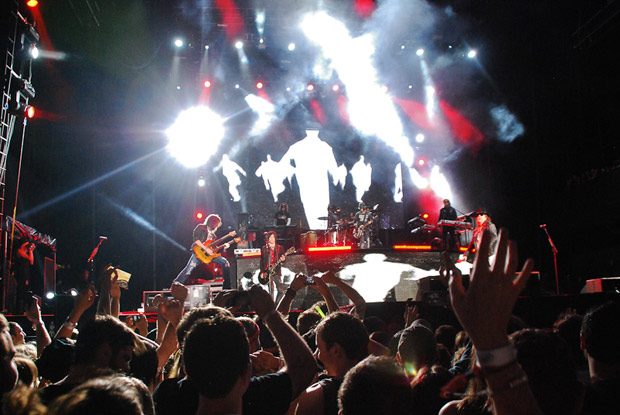