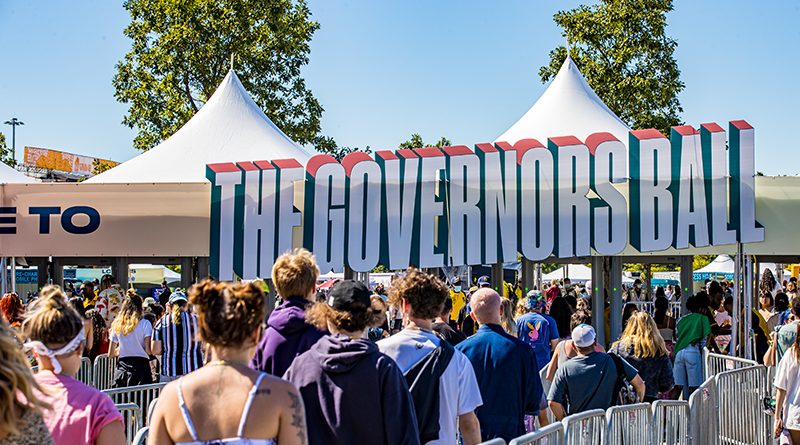 Thanks to the COVID pandemic, every festival last year after the start of March was cancelled, and its continuing effects pushed summer fests into the fall this year. New York City’s own Governors Ball was one such, moving from its usual early June to the last weekend in September, 24th-26th, and even from its usual Randall’s Island spot (hasn’t been on named-for Governors Island since the first time, ten years ago – QRO inaugural year recap) to CitiField in Queens (or rather, the parking lot of the Mets’ home – its regular residents were playing away games, but Gary, Keith & Ron were still broadcasting from the Ralph Kiner Broadcast Booth inside CitiField).

But little about 2021 Governors Ball felt slapped together. The 7 train was running on time, and let out right at the festival (if the general public did have to walk a bit around the actual festival to get to/from the entrance). The four stages were two sets of alternating stages, arrayed in a circle, pointing outward, which kept the physical size of the festival relatively tight – no giant walks across vast distances to make it to another stage – but also avoided any serious sonic bleed. There was even a set of stairs over the backstage connection to the outside world, meaning a full circle for the crowds. There was security and staff everywhere (even those stairs), watching over the kids having their day(s) out.

And there were a lot of kids. Governors Ball has evolved/grown into its very mainstream, popular appeal status of today, and while that might upset the Big Apple hipsters (or not, as it gives them something to complain about), it has made it a go-to for teens of the five boroughs and tri-state area, very akin to Chicago’s similar Lollapalooza (QRO 2021 recap) in its ability to both attract those young folks to come and their parents to let them come. Indeed, Governors Ball ’21 skewed even younger, no legacy act in sight, but many lines of girls wearing tube tops and short-shorts snaking their way through the crowd.

Yes, tickets were expensive, and so was food and especially drinks, a 25 oz. Bud Light going for $14 (and same size Bud Light Hard Seltzer a dollar more), but they were sold, from the 50,000 fans a day to those old enough to drink carrying multiple big & big-price drinks into the crowds (and special mention to the free cans of Coke Zero given out at a few places, including the press tent – kept your correspondent from getting drunk, and instead just a caffeine high…). There were lots of sponsors, with GOVBALLNYC Stage presented by Verizon, Bacardí Stage, Honda Stage, GrubHub Stage, and said Bud Light Hard Seltzer Sessions (with the rise of hard seltzer, the usual Bud Light Stages have become Hard Seltzer Stages…), but what do you expect? This ain’t Woodstock, but a professional festival run professionally.

Having a festival in a parking lot never sounds ideal, but brought the serious benefit of a lot less worry about rain. Outdoor events just the night before had been cancelled, and one could have feared the muddy, muddy Randall’s Island grounds of Governors Ball ‘13 (QRO recap). Instead, while there were some puddles on Day One, nothing more. There was even a lot of fake grass laid down – and attendees were apparently allowed to smoke (of course more joints than cigarettes…).

The mainstream nature of Governors Ball could have meant that the headliners and other late-in-the-day acts overshadowed the early artists, acts labeled ‘up-and-coming’ but a bunch of them won’t go anywhere greater, fans not coming for the heat of the day but only for the cooler evening. Yet there were numerous artists that were worth seeing in their own right, such as Bartees Strange on the Honda Stage, stretching genres and even covering The National’s “Lemonworld” (unusual indie covers by more pop artists would be a theme this festival). Meanwhile, Sarah Barrios brought sweet acoustic heartbreak to the small side Bud Light Seltzer Sessions Stage with her bonus set.

This is the twenty-first century and of course hip-hop had strong representation. Rap collective EARTHGANG shouted many times to, “Make some noise!” to go with their rapid-fire rhymes on the Honda Stage, while later Freddie Gibbs got the Bacardí Stage crowd to shout “Fuck the police!” as he played with collaborator The Alchemist off of last year’s team-up Alfredo (he also played his final song with his NYC infant in his arms).

But you could also slow down and appreciate things. Sasha Sloan was sultrier on the Bacardí Stage before Gibbs, namechecking a friend’s parents who encouraged her pursuing music and were there that day. Leon Bridges brought smooth sounds to a big GOVBALLNYC Stage crowd, including a still intimate moment when his band mostly left and it was just him & the audience for favorite “River”.

And there were acts that crossed over in appeal from the indie-sphere to mainstream. Orville Peck has gotten as much attention for his get-up, always wearing a cowboy hat and fringed mask (since before the pandemic), and link to Lady Gaga, but he is something more, though his particular deep-voiced slow country shifted into more upbeat times better suited for the GrubHub Stage (and he still did his cover of Gaga’s “Born This Way”). Meanwhile, Future Islands united Gen Z and the geriatric millennials at the Honda Stage, with both their music and their love of playing music again. Frontman Samuel T. Herring brought his big, enthused electro-pop, chest-rending and all, but also mentioning the band’s early days in small places and how the vast majority of the crowd hadn’t been there for that (to be fair, most were probably too young to get in to the likes of Baby’s All Right then).

Mainstream popular music has been leaning more & more away from the old rock n’ roll, and that was reflected in the Governors Ball ’21 line-up, but there was still space for the likes of the rock stars Portugal. The Man headlining the Bacardí Stage. They started with a direct appeal to the Gen Xers out there, being introduced by none other than Beavis & Butthead! Mike Judge had apparently revived the nineties’ two hard-rocking idiots to watch a Portugal. The Man video, Butthead calling them, “The greatest band in the world. Better than The Beatles. Better than The Rolling Stones. Better than Silverchair. Almost as good as Pantera.” (Beavis just shouted, “Fire!”)

Each day of Governors Ball ’21 closed with two acts playing exclusively, first at the Honda Stage, then finally the GOVBALLNYC Stage for the night’s big finish. It was Sydney’s RÜFÜS DU SOL in the penultimate slot, with big lights for the big DJ tropics.

And then came Billie Eilish. Her star has grown & grown & grown into being one of the biggest musicians on the planet right now, headlining a number of festivals before her massive postponed-two-years 2022 tour, off of this year’s Happier Than Ever, her killer follow-up to killer 2019 debut WHEN WE ALL FALL ASLEEP, WHERE DO WE GO?. The crowd stretched far & wide, if not high (your correspondent felt very tall and very male among all the fans, not for the last time at Governors ’21…) – you could see all the camera phones up, not to mention girls on shoulders.

Eilish was super excited to be back on stage, giddy not too-cool-for-school pop star. She & her band, which includes brother/producer Finneas, did old hits (if you consider 2019 breakthrough “Bad Guy” ‘old’), she did new, and even called out for taking care of the planet – and, “If you don’t think global warming is real, then you’re a fucking idiot.”