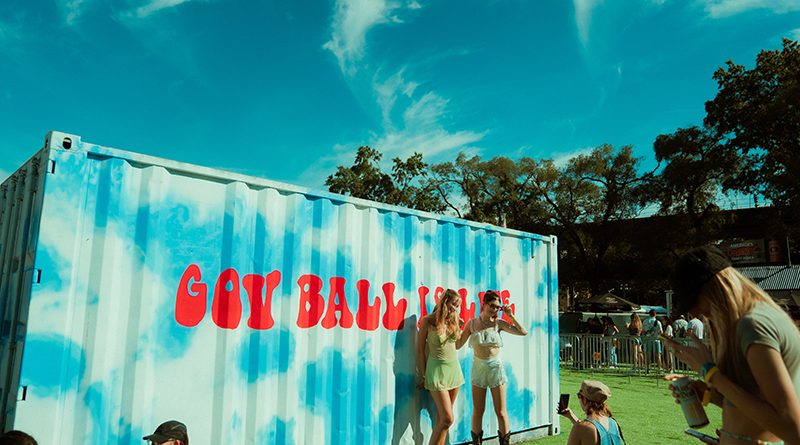 Thanks to the COVID pandemic, every festival last year after the start of March was cancelled, and its continuing effects pushed summer fests into the fall this year. New York City’s own Governors Ball was one such, moving from its usual early June to the last weekend in September, 24th-26th, and even from its usual Randall’s Island spot (hasn’t been on named-for Governors Island since the first time, ten years ago – QRO inaugural year recap) to CitiField in Queens (or rather, the parking lot of the Mets’ home – its regular residents were playing away games, but Gary, Keith & Ron were still broadcasting from the Ralph Kiner Broadcast Booth inside CitiField).

But little about 2021 Governors Ball felt slapped together. The 7 train was running on time, and let out right at the festival (if the general public did have to walk a bit around the actual festival to get to/from the entrance). The four stages were two sets of alternating stages, arrayed in a circle, pointing outward, which kept the physical size of the festival relatively tight – no giant walks across vast distances to make it to another stage – but also avoided any serious sonic bleed. There was even a set of stairs over the backstage connection to the outside world, meaning a full circle for the crowds. There was security and staff everywhere (even those stairs), watching over the kids having their day(s) out.

And there were a lot of kids. Governors Ball has evolved/grown into its very mainstream, popular appeal status of today, and while that might upset the Big Apple hipsters (or not, as it gives them something to complain about), it has made it a go-to for teens of the five boroughs and tri-state area, very akin to Chicago’s similar Lollapalooza (QRO 2021 recap) in its ability to both attract those young folks to come and their parents to let them come. Indeed, Governors Ball ’21 skewed even younger, no legacy act in sight, but many lines of girls wearing tube tops and short-shorts snaking their way through the crowd.

Yes, tickets were expensive, and so was food and especially drinks, a 25 oz. Bud Light going for $14 (and same size Bud Light Hard Seltzer a dollar more), but they were sold, from the 50,000 fans a day to those old enough to drink carrying multiple big & big-price drinks into the crowds (and special mention to the free cans of Coke Zero given out at a few places, including the press tent – kept your correspondent from getting drunk, and instead just a caffeine high…). There were lots of sponsors, with GOVBALLNYC Stage presented by Verizon, Bacardí Stage, Honda Stage, GrubHub Stage, and said Bud Light Hard Seltzer Sessions (with the rise of hard seltzer, the usual Bud Light Stages have become Hard Seltzer Stages…), but what do you expect? This ain’t Woodstock, but a professional festival run professionally.

Governors Ball 2021 eased nicely into its final day, such as with the smooth, relaxed sounds of Amaarae on the Bacardí Stage. On the final day of any festival, you might be a little worn and sun baked, particularly at its hot, sunny start (even near the end of September). Princess Nokia has long done wild shows, and while she did bring her dancers to the GOVBALLNYC Stage, her performance was a little less wild, but a little more polished, than her early days. Yet she still embraced & celebrated Africanism, and killed it with “Tomboy” and her “little titties & fat belly!”

Initially, Caroline Polachek’s solo career kept with the airy waves of her old band Chairlift, but more recently she’s been upping the dance over the atmospherics, like at the GrubHub Stage (but also choked up about returning to play in NYC). Meanwhile, Umi asked the Bacardí Stage crowd, “You wanna mosh? Go ahead & mosh!”

Duck Sauce are another DJ duo, Armand Van Helden and A-Trak, indeed another DJ duo who played The Yeah Yeah Yeahs’ “Heads Will Roll” as a banger, just like Brothers Macklovitch (another DJ duo with A-Trak) the previous day, but at least they also brought their giant inflatable duck to tower over them at the Honda Stage. Thankfully, Governors Ball ’21 reached a lot further at the GOVBALLNYC Stage with Nigeria’s crossover Afro-fusion star Burna Boy, who brought his home’s rhymes & rhythms across the Atlantic.

There are some artists that you want to see, but you don’t want to admit that you want to see, even though should be fine admitting it. Festivals are the best place to see such artists, like Carly Rae Jepsen. Yes, you remember her from “Call Me Maybe” (celebrating its tenth anniversary), but she’s been churning out pop hits since then, no maybe about it. On the Honda Stage, she brought her big pop that everyone was singing along to, and the whole experience was definitely amped up by being around so many happy fans. She was a real presence on stage, with charisma & humor from start to finish. There were hits like “I Really Like You”, “Maybe” mid-set, and “Cut To the Feeling” as close – though no “Higher”, despite still having a few minutes to pull it off.

Perhaps Jepsen ended early to make up for 21 Savage coming on so late on the GOVBALLNYC Stage. First, the schedule changed from his 6:00 PM start to 6:30 PM – and then he didn’t come on until 7:00 PM. You literally could have seen all of Jepsen’s set waiting for this Fred-level Savage. Another doubly-late artist was Young Thug, first bumped from 7:00 PM to 7:15 PM, but finally coming on at 7:40 PM to close out the Bacardí Stage. At such an otherwise well-run festival, it was not hard to notice, but he still had a big crowd (and later joined headliner Post Malone on stage).

Thankfully, Ellie Goulding came on to the close out the Honda Stage only twenty minutes after her original start/five minutes after her rescheduled. She still has her big sound, but perhaps due to the lateness of the set (both vs. schedule, the festival as a whole, and in the day, with the sun finally down), she wasn’t quite as special as she has been before.

If you only know Post Malone from looking at him, and maybe his Bud Light commercial, you might have a bad taste in your mouth, but closing out Governors Ball ’21 on the GOVBALLNYC Stage, he was nothing if not gracious and thankful. He not only repeatedly thanked the crowd for coming, but before his mega-hit “Circles”, admitted to needing auto-tune, and apologized for his voice on it sounding like somebody, “Spilled beer on the computer or something.” He did his big hits such as that, “Better Now”, and “Psycho”, but also a 2016 “deep cut”, “Too Young”. And yes, he brought the pyrotechnics (and just pyro) as well, for “Saint Tropez”.

We Were Promised Jetpacks – Enjoy the View