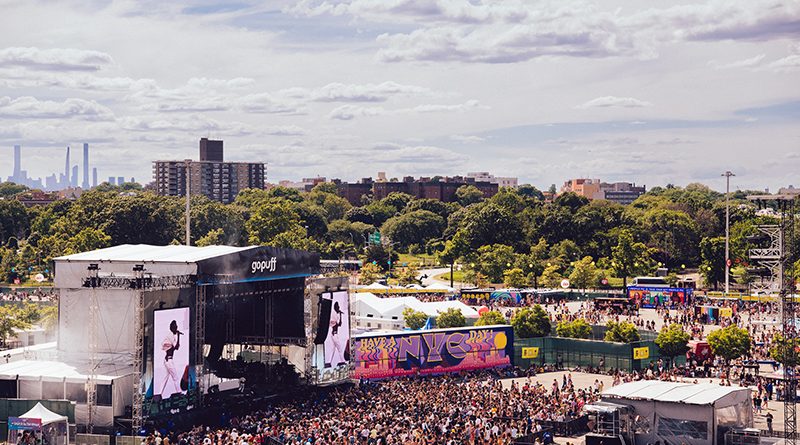 From Samia to Julia Wolf, introspective rock felt like the prime serving of Gov Ball’s first day; inadvertently, declaring that the future of music comes with chill chords and a lot of self-analysis. Opening the festival, which is never easy, Plastic Picnic set an admirable tone at the main GovBallNYC Stage. They are a band that 100% proves being considered “one to watch” or “on the rise” in no way means you do not know your sound or what makes you watchable. They truly are a great band.

Even if you only knew Blu DeTiger from appearing with Bleachers on Saturday Night Live, it only prepped her to be the lead in her own music. She swung her guitar like a hammer on the Gopuff Stage and was giving pure Courtney Love “Celebrity Skin” vibes. It was awesome and matched the very rocker energy of Friday.

There are certain artists that, from their beginning, capture the internet. They captivate a portion of it because they totally encompass a certain aesthetic and vibe. Watching beabadoobee on the GovBallNYC Stage was like listening to all your fave, ‘90s rom-com soundtracks, 10 Things I Hate About You or She’s All That. She is perfectly vintage and fresh, all at once, and garnered one of the biggest crowds in Gov’s three days.

Being groovy is hard work, but Channel Tres brought a disco flavor to the Governors Ball ‘22. He was one of the funniest acts of all three days, in part, because he music felt like the lightest in every way. Next to Becky G, he had one of the most danced to sets, hands in the air, great bass lines. Though his Gopuff Stage might have been a bit too close to the Bacardí Stage when JPEGMafia took to that, but the sonic bleed did create a neat juxtaposition in styles, Tres’ more dance-party compared to JPEG’s harder edge.

A notable import for Gov Ball ’22 was Skepta, and at the Gopuff Stage one could have thought you were going to see The King of London Grime. Yet, he has changed in sound and style; giving Drake a run for his R&B laced rhythms. Meanwhile on the Bacardí Stage, The Knocks were playing their first festival since COVID, mixing DJing other people’s hits (such as Len’s “Steal My Sunshine”) with their own.

Like Black Pumas on the GovBallNYC Stage, there are certain artists that are a guarantee. They never give a bad show, and whether or not you know their work is irrelevant to the fact that you will like their show. Quinn XCII is one of those artists, and, to his die-hard fans, he was the ultimate “feel good” performer at the Gopuff Stage.

In the week running up to Governors Ball ’22, hip-hop super-trio Migos cancelled (amid rumors that they are going to break-up), but the festival was able to get a replacement in Lil Wayne. Yet, in a direct parallel to him canceling the day of at NYC’s Panorama in ‘18 (QRO recap), he had “flight delay” which cause another cancellation – only for Governors Ball to get another replacement in A$AP Ferg, announced only an hour-and-a-half before his GovBallNYC Stage appearance, and the local had a pretty impressive delivery, all things considered.

While his start at the Bacardí Stage was late, there was a huge crowd for Louisville hit Jack Harlow. He has gotten very big, thanks to being able to both give off a goofy & accessible atmosphere, but also harder slinging harder rhymes. Plus, fire…

You cannot defeat Mr. Rager, and to a few lucky fans in the front row of the GovBallNYC Stage, the apparent sighting of Timothée Chamalet rocking to Kid Cudi’s set was like a peach for their soul. In a way, Cudi was the perfect, opening headliner for Governors Ball 2022. Its most varied line-up, Kid Cudi’s music spans genres, aesthetics, and, ultimately, vibes.