The rain held off for the leading ladies of Gov Ball '22.... 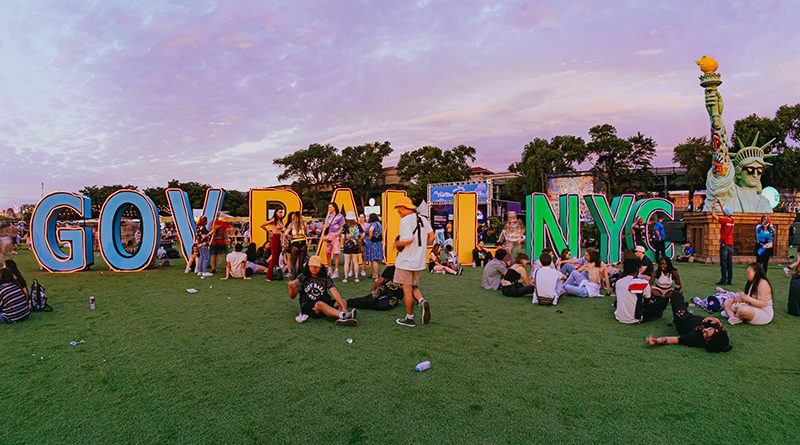 With such a perfect opening day, Saturday at Gov Ball ‘22 had a high bar to reach. Since Astroworld, festivals have a certain nervousness and quietness to them because no one goes to a music event to feel or become unsafe. The smoothness of one of the biggest festivals of the year was super impressive, and matched a lineup that was equally serene and entertaining. There were moments of light rain this day, but nothing that came close to serious.

Being the “Piano Guy” of a festival is really hard. For however much you “rock out” in front of a keyboard, it is not too often that you don’t look like a man jiggling in place. Yet, Tom Odell’s voice and presence always reverberates with love and nostalgia at the Bacardí Stage. One of the openers, he set the tone that Saturday’s lineup was for the lovelorn.

Fierce is an understatement, and freeing the nip seems necessary for a Tove Lo show. I have yet to see her perform without going topless and serving you a show that makes you feel so free and feisty, you could join Cobra Kai. Yet, Gopuff Stage became her prime opportunity, between costuming and lighting, to show she is truly a pop star.

Of certain note when looking at the Gov Ball ’22 line-up is Diesel, a.k.a. a DJ set at the Bacardí Stage by the one-and-only Shaq. Admit it, you want to see the NBA legend (and Kazaam) spinning at the tables. The giant had his personal unabashed enthusiasm, didn’t skimp on hits & beats, and even repeatedly demanded a mosh pit (can you imagine seeing Shaq in your mosh pit?…). And he’s actually a pretty good DJ, with harder, bigger beats (the kind that you can mosh to).

One of the surprisingly favorite acts, Still Woozy has gained a cult following through his bombastic energy and heartbreak croons. Seeing him live on the GovBallNYC Stage, one got “woozied” as he proved that Governors Ball has become one of the best places for rising acts to show why they will soon be festival headliners.

Another rising star was at the Gopuff Stage in Chelsea Cutler, who nicely started out by announcing, “I know it’s early, but I need you all to jump as high as you can!” She noted that the last time she was supposed to play Governors Ball, it rained, but this time the drops held off. The hometown girl got the crowd to meet their neighbors, asked her fans to sing at the top of their lungs, and even asked those dragged to the fest by their significant others (or just waiting for Flume) to enjoy. She brought a nice mix of up-pop and downbeat feelings, like enjoying “Sad Tonight”.

When it comes to loyal fans, you cannot beat the Joji’s at the Gopuff Stage. Readying for a new tour. Joji showed that he is more confident than ever in his lax, rocker style. Emanating an aura of calm and chaos, he oddly embodied the emotional range of the day.

Unfortunately, Roddy Ricch’s set at the GovBallNYC Stage was cancelled, only announced halfway through when it should have happened. Rumors flew, but apparently it was that the good ol’ NYPD had arrested him upon arriving for having a gun in his car, only for the charges to be subsequently dropped later that day.

Before Day Two’s leadingest lady came Ashnikko on the Bacardí Stage, with her own great kiss-off woman-first attitude from this “Working Bitch”. Just her up there with a DJ, you might have thought that she would have needed a band behind her for stage presence, but pulled it off (extra points to great outfit).

The “Halsey Heads” were out to play for her headlining GovBallNYC Stage performance, and ready to sing in full-voice, how they were “bad at love.” Performing “So Good” for the first time, live, Halsey showed that she one of the best, thematic entertainers out there. This time, she gave rocker edge (including covering Kate Bush’s both-classic-and-of-this-moment “Running Up That Hill”), and for Saturday’s lovelorn theme, it was perfect.

Delta Spirit – One Is One