<img src="http://www.qromag.com/wp-content/uploads/2008/12/grailsdoomsdayersholiday.jpg" alt=" " />Grails inflect their long rock instru-mentals with a few different flavors on <i>Doomsdayer’s Holiday</i>, but none more often than those of the Middle East. ... 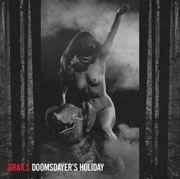 Grails inflect their long rock instrumentals with a few different flavors on Doomsdayer’s Holiday, but none more often than those of the Middle East.  They’re not trying to graft the head of Persian melody on to the body of Western music as Trey Spruance and Mr. Bungle did, nor do they splice bits of foreign instrumentation and rhythm into rock songs like Polvo and Spatula.  Doomsdayer’s Holiday suggests an album-length commitment to convincing the listener that mixing textured instrumental rock and Middle-Eastern music is a totally natural and cohesive idea.

Maybe “textured instrumental music” would be more accurate.  A few genres occupy the Western half of the equation: metal in the title track, blues-rock in “Reincarnation Blues”, folk in “The Natural Man,” dub in “Immediate Mate,” and classic rock in “Acid Rain”.  The band’s pretty good at mixing it up; they sound at least competent in every genre they try.  Whatever they’re doing, patience and a willingness to let songs veer off course help them.

Most of the songs go somewhere.  “Reincarnation Blues” introduces a foreign melody, unoriginally hammers it into a stomping rock song, and then, after a jazzy breakdown, lets it dissolve into a drone before fading into “The Natural Man”.  Although that piece shows off Grails’ melodic talent, it ends up selling their rhythmic ability, too – they get a good groove going despite wispy melodic elements and absent percussion, thanks to good rhythm guitar and what sounds like a dulcimer.  “Immediate Mate”, the dub track, is both the most patient and the best of the bunch.  By the time the drumming goes nuts, it feels logical and natural, and the many diversions complement the main thread of music.  It’s impressive, how many things have time to run their course in a five or six minute track.

The record flows in a circle; climaxes fade into preludes and main melodies sometimes softly reprise a few tracks later.  Until the occasionally major-key calm of closer “Acid Rain” arrives, it’s unclear where the band is going with all the accumulating doom, gloom, and foreboding other than to try to create it with as many different genres and instruments as possible.  But this lack of purpose is beside the point.  The best part of Doomsdayer’s Holiday is listening to a patient, detail-obsessed band do many things well, when most bands can’t even do one.

The Postmarks : By the Numbers