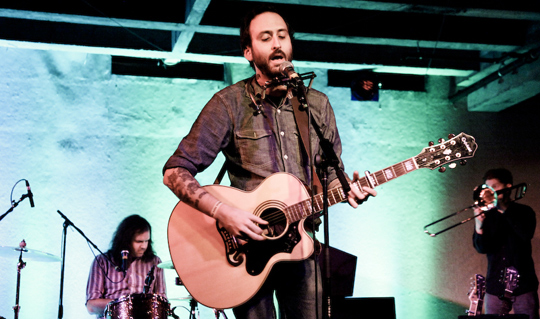 Portland’s Doug Fir, a usually bustling, trendy venue known for its excellent sound, clean design, and regular indie music devotees, was emptier than one has seen it in a long time for Grand Archives and The Most Serene Republic on Wednesday, September 23rd.  It’s a shame the show didn’t get a better draw (though it was a Wednesday, and just a few short days since the end of the exhausting Music Fest Northwest, at that – QRO festival recap).  Those that did come out, however, were unfailingly attentive, save for a lone drunk girl who kept shouting during Grand Archives’ set, "Number 7!  PLAY NUMBER 7!!!" 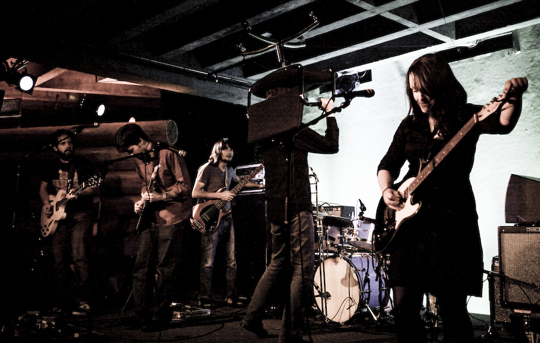 Click here for QRO’s interview with Ryan Lenssen in 2007

Click here for photos of The Most Serene Republic, later on this tour, at (le) Poisson Rouge in New York, NY on October 8th, 2009 in the QRO Concert Photo Gallery

The Most Serene Republic opened the evening with a 45-minute set.  It quickly became apparent that this Arts & Crafts band earns every Broken Social Scene (QRO spotlight on) comparison they receive.  Their lyrics are just as 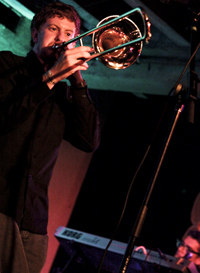 oblique, their sound is just as paradoxically bone crushing and heart-melting, and their miniature stage orchestra (trombone, Korg and Roland, banjo, a million other stringed things…) could certainly draw an eye-roll from pop purists who favor a simple, hooky four-piece.  If it weren’t for their on-stage ebullience, exasperation might tempt. 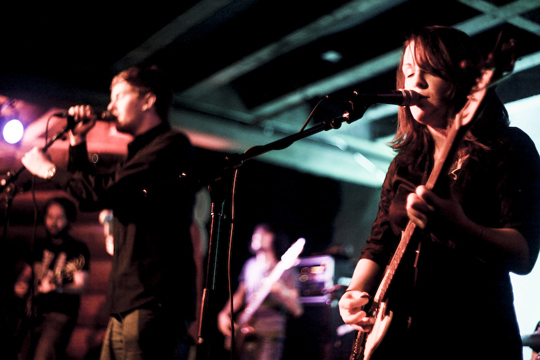 Click here for photos of The Most Serene Republic at Union Hall in Brooklyn, NY on June 27th, 2009 in the QRO Concert Photo Gallery

Click here for QRO’s review of The Most Serene Republic at Mercury Lounge in New York, NY on March 21st, 2008

Click here for photos of The Most Serene Republic at Mercury Lounge on December 14th, 2007 in the QRO Concert Photo Gallery

Andrew Jewett (vocals) is cerebral in his song-writing, and somehow equal parts intellectual and goofy in his 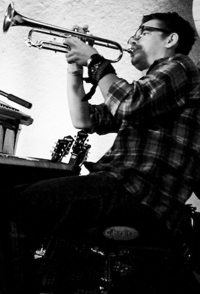 stage presence.  If he was the mad professor, Emma Ditchburn (vocals, guitar) was his steady-handed colleague.  Jewett and Ditchburn’s vocals wove together seamlessly, whether in two-part harmony or shared lead duties.  There was a romanticism borne of Ditchburn’s floating, sweet, pitch-perfect voice, but she was such a grounding force, the listener never completely disappeared into la la land. 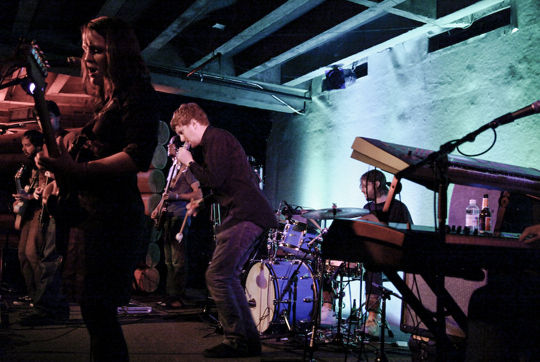 Click here for photos of The Most Serene Republic at CMJ 2007 in New York, NY in the QRO Concert Photo Gallery 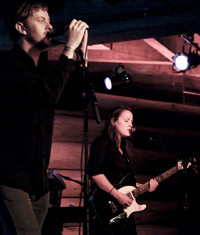 The same can be said of the Most Serene Republic’s performance as a whole.  There was something that prevented one from completely losing oneself in the moment, though their music practically gets down on its knees and begs for exactly that.  Each song jumped between mania and an oceanic, narcotic feeling with a studied expertise that overwhelmed and exhausted as often as it soothed and invited.  It felt schizophrenic, and as Jewett’s lyrics often touch upon such themes as brain chemistry, the senses, and the internal human experience, the effect is clearly intentional. 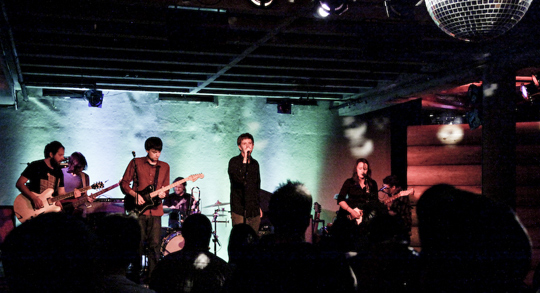 Click here for QRO’s review of The Most Serene Republic at Maxwell’s in Hoboken, NJ, two years-and-a-day-ago

At one particularly raucous point in the set, during the beat-box-y "Phi", Jewett spoke of wanting to pray to the overhead spinning disco ball.  A few minutes later, he recounted listening to nothing but Eno as the band traversed the coast of Oregon, "your beautiful state."  While the band’s music is neither of the ambient or disco genres, the true spirits of both were there in the set.  If the Most Serene Republic want you to be serene, they achieve that exactly 50 percent of the time.  Sometimes sexy and intuitive, sometimes balls-to-the-wall, they know exactly where they want to take you, and you best be game. 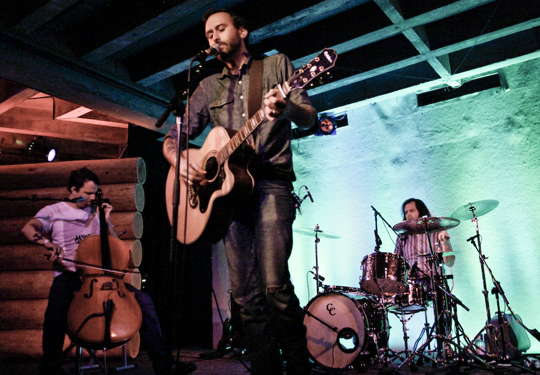 Click here for photos of Grand Archives, later on this tour, at (le) Poisson Rouge in New York, NY on October 9th, 2009 in the QRO Concert Photo Gallery

The Grand Archives played a considerably more sedate set.  A four-piece, they occasionally added a cello, harmonica, or guest violin to round out their smooth, rolling folk sound.  Matt Brooke (previously of Carissa’s Wierd and Band of Horses – QRO live review) led vocal duty, and three- and four-part harmonies added depth to delicate ramblers such as "Topsy’s Revenge".  Most of their hour-long set was from their new LP Keep In Mind Frankenstein, and their wistful sound gave the listener space to breathe, and contemplate from whence that inexplicable record title could have come. 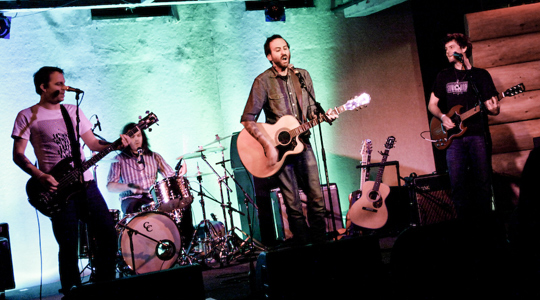 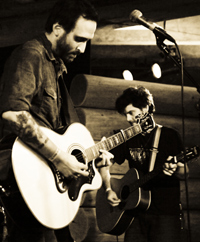 Brooke’s shy and occasionally self-effacing demeanor was a welcome respite after The Most Serene Republic’s demanding set.  During a break caused by technical difficulties, he joked that the band had crafted their set list for the evening expressly to avoid the small talk into which he was now forced.  An unassuming band that asks patience of its audience and rewards with vulnerability, the Grand Archives lulled, even when they rocked out. 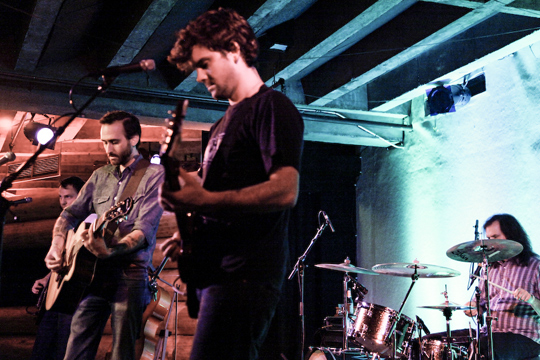 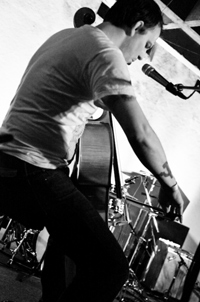 An emotional evenness was threaded throughout the set, which included the earnest, sad-eyed classic country of "Dig That Crazy Grave", cheery whistling in their college radio hit "Miniature Birds", and bittersweet harmonica in "Left for All the Strays".  A blissed-out anthem here and there spiked the emotional response of the crowd in a quiet way, and frequent compositional transitions afforded the band an opportunity to demonstrate their music theory chops, yet never got in the way of their certain gentle consistency.  This is largely due to Brooke’s wispy vocals, reminiscent of Nick Drake.  One got the sense that if you let your attention wander for too long, you’d turn round to find that the Grand Archives had quietly built an empire right behind your back.  There was an undercurrent of mystery beneath their humble and melancholy simplicity, like your favorite threadbare shirt, about to unravel completely.  Not knowing what may happen next keeps you glued to their hushed countenance.

Grand Archives playing "Left for All the Strays" live, later on this tour, at (le) Poisson Rouge in New York, NY on October 8th, 2009: 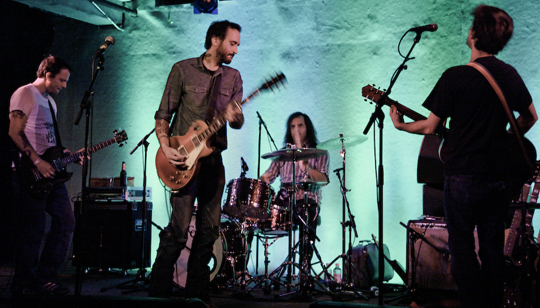