<img src="http://www.qromag.com/wp-content/uploads/2012/06/grandduchyletthepeoplespeak.jpg" alt="Grand Duchy : Let the People Speak" /><br /> Would you have listened to this if it wasn't associated with Frank Black Francis? ... 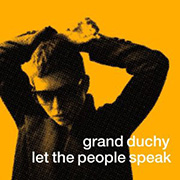 When Frank Black Francis announced that he was doing a record with his wife Violet Clark a few years ago, it was greeted with low expectations and sighs of, ‘Here’s something else he’s doing while not making a new Pixies album…’  Yet the result as ‘Grand Duchy’, Petit Fours (QRO review), was an interesting mix of Black’s alt-rock and Clark’s indietronica.  Black’s solo output had begun to dip (QRO review), but his recent team-up with long-time friend Reed Paley paid off (QRO review) – so, if he’s still not going to do a new Pixies record, might as well be another shot of Grand Duchy.  Unfortunately, Let the People Speak is way more Clark than Black, and is a jumbled, uninspired mess that you wouldn’t give half a glance if it weren’t associated with Mr. Frank Black Francis.

Clark wrote Speak while Black was on tour with the Pixies (QRO live review), and it is definitely much more Clark than Petit – and thus, less Black.  But ‘tronica is only bigger these days, so that wouldn’t necessarily be a bad thing, but Violet Clark is more Linda McCartney (?) than Yoko Ono in terms of musical ability – and vice-versa in terms of accessibility.  There’s track after track of not-fully-formed ideas, unnecessary & simplistic tech beats, and unearned attitude, whether it’s the glam-rock kiss-off “See-Thru You”, Black’s alt-country vocals over tech sounds in “Where Is John Frum?” and “Esther” (and over accordion on “Anna Bliss”), forgettable slow disco beats in “Geode”, poor attempt to spook “Two Lies and One Truth”, synth-stop that wears thin on “Silver Boys”, failed dance-press “Illiterate Lovers”, and so on.  It reaches its culmination with the penultimate “ROTC”, which attempts to put tech, singing, garage, and more at various times over a slow beat.

There are a few songs where Speak rises, at least to some extent.  “Shady” is some strong alt-country rough-road that Black Francis has been doing since he was called Frank Black – but it’s a Black Francis song, not a Grand Duchy one.  The synth-press of “White Out” is decent, and the tech-beat disco closer/title track comes closest to making any sense of the mess.

Let the People Speak begins with an introduction to “The Lopsided World of L”, a Phoenix radio show – and host Jonathan L proceeds to speak before virtually every song (or rather, at the end of the prior track).  While it may have seemed like a neat idea at the time, to make the record a kind of radio show in its own right, it wears thin quickly (especially once you realize that the male voice is neither Black nor Dennis Leary, who L sounds a whole lot like).  Furthermore, it comes off as an attempt to ‘prove’ that this is a legitimate album by a legitimate band, giving it ‘cred’, even ‘indie cred’, and that it’s not just some side-project of a side-project.  Andy Warhol references & comparisons seem forced and lame in most situations, and only more so here.

It’s not a knock on a Grand Duchy record to say that it doesn’t sound like Frank Black Francis (though the opposite would be a compliment) – it doesn’t have to, even though his involvement can’t help but be one’s primary reason of interest.  But it does sting when the result is a record that’s barely a record by barely a band, and is something one never would have listened to at all without his name attached to it.