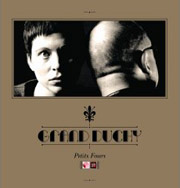 Ever since The Pixies reunion finally came to a close, singer/guitarist Black Francis has been busy with everything but a new Pixies record (keep dreamin’…), from the 2006 double album Fast Man/Raider Man to returning to his Pixies-era ‘Black Francis’ moniker (dropping his post-Pixies ‘Frank Black’ name) to 2007’s Bluefinger (QRO review) and last year’s Svn Fngrs EP (QRO review).  He even found time to produce Art Brut’s (QRO spotlight on) upcoming Art Brut Vs. Satan.  And now he and wife Violet Clark team up as Grand Duchy to put out Petit Fours, an interesting mixture of alt-rock and indietronica.

Taking the name from where they did the recording sessions (Luxembourg, Grand Duchy of), reportedly Clark’s eighties interest clashed with Francis, as he says he “had spent the latter part of the 80’s doing my part to destroy the 80’s” (still better than working with Kim Deal…).  Yet Petit Fours seems to more favor Clark’s synth-tronica than Francis’ recent alt-country work.  Clark’s vocals and vision take center stage on “Lovesick” and “Black Suit”, with her voice reminiscent of Garbage’s Shirley Manson (now the evil liquid metal robot on FOX’s Terminator: The Sarah Connor Chronicles).  It reaches its pinnacle with the danceable press of “The Long Song”, which gets bigger and better.

When Grand Duchy slip into older styles, Petit Fours does suffer.  Clark’s girl-group ways on finisher “Volcano!” are catchy and fun, but don’t work so much on “Break the Angels” (which also is hampered by starting with a bass line riff that clearly recalls The Pixies’ excellent “Gigantic”).  The road-blues of opener “Come On Over To My House” (the only track where Francis exclusively sings) is sly, but a bit simple, while the higher strum-beat of “Fort Wayne” (the first piece Francis & Clark wrote together) is a little too twee.

Petit Fours’s penultimate “Ermesinde” sees Francis’ alt-country meet Clark’s 80’s synth – and the result is way better than that description.  Not really a Black Francis (or Frank Black) record, Grand Duchy is still definitely on the positive side of musician husband-makes-a-record-with-his-wife side-projects (think Handsome Furs – QRO album review – and not Wings…), and is certainly something new.