<img src="http://www.qromag.com/wp-content/uploads/2009/11/grantleephillipslittlemoon.jpg" alt=" " />Grant-Lee goes back to the nineteenth century on his latest, <i>Little Moon</i>. ... 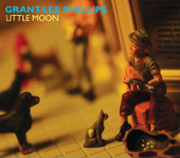 Back when Grant-Lee Phillips started in music as the frontman of Grant Lee Buffalo in the early nineties, even later when the Buffalo broke up and he went solo at the start of this decade, there weren’t nearly as many alt-country/folk singer/songwriters around as there are now.  So how does the ‘town troubadour’ of the (now late) Gilmore Girls stay distinct & relevant on his sixth solo release, Little Moon?  By upping his wry, weary, skewed view of nineteenth century Americana sounds, dance hall, orchestra & honky-tonk.

As the name might suggest, Grant Lee Buffalo always had a certain vision of America, through 1800s glasses, but solo, Phillips has eschewed the political, at times banal tones of other established songwriters in his genre, for a more personal approach that’s altogether more impressive.  With Little Moon, he adds in dance hall sounds at times, starting with the up-stomp "Good Morning Happiness", but also finisher "The Sun Shines On Jupiter" and even the ostensibly twenty- or twenty-first-century "It Ain’t the Same Old Cold War Harry".  But even in his stripped, soul-baring side, there’s an old-timey feel, such as the piano-loss of the title track, the strings-heavy grandeur of "Blind Tom", or the accordion-twang of the following "One Morning".

Little Moon isn’t entirely pre-1900, as Phillips plays it straighter on such pieces as the pressing, up-country anthem "Strangest Thing" or the world-weary "Violet".  A whole record of nineteenth-century-influenced material might be too much, but it does leave some of the more stripped pieces feeling less special.  But maybe that’s because there’s so many people doing that these days.

Grant-Lee Phillips isn’t the first or only singer/songwriter to look to America’s first full century for inspiration and distinction – witness Colin Meloy’s work on The Decemberists’ latest, Hazards of Love (QRO review), or the entire discography from another Americana-named troubadour, Elvis Perkins (QRO live review).  But he does it right, and at the right time, having built the groundwork for his new Little Moon.