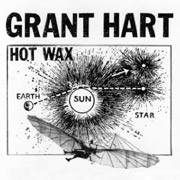 How does one get a handle on Grant Hart (QRO interview)?  Can one?  He started in music over thirty years ago as the drummer for iconic punk trio Hüsker Dü (QRO spotlight on), and as – or even before – the band evolved from speedcore to accomplished, even melodic punk (and being one of the first eighties punk acts to sign to a major label), Hart became one of the still-rare drummer/singers, eventually near-sharing singing duties with singer/guitarist Bob Mould (QRO live review).  Hart & the Hüskers then became infamous for their break-up in 1988, with accusations of drug abuse and creative over-control flying – or at least reportedly flying – between Hart & Mould.  His post-Hüsker career has been even more confusing, starting with the post-break-up solo record Intolerance, then heading his own outfit, Nova Mob, for two records – including a concept album about the volcanic destruction of Pompeii & the NASA space program, Last Days of Pompeii – before returning to solo work with 1999’s Good News For the Modern Man.

And then… nothing.  Well, not ‘nothing’, but no new truly ‘Grant Hart’ material for the next ten years.  In that time, million-and-one things have happened in the music world, from file-sharing & the decline of the major label system to the rise of Williamsburg & online music press.  So how has Hart changed in that time?  Well, this is the man who still doesn’t own a cell phone or have e-mail, and his melodic pressure hasn’t gone anywhere on Hot Wax.

Two of the main hallmarks of Good News were Hart’s voice and organ/synth work (an instrument he reportedly almost chose to play over drums in the first days of Hüsker Dü), and they’re certainly back in Hot Wax.  From the first words of opener “You’re the Reflection of the Moon On the Water”, it’s amazing how Hart’s voice hasn’t aged a bit (especially when, physically, he has… – QRO photos).  The pressure and melody to that sort of jangle-pop piece is Hart’s underlying method, one that’s surprising if you think of him as an iconic figure in punk, but perhaps not so much if you view him as the drummer/singer who brought melody to the genre.  Just take the following “Barbara”: on first listen, the melody procession is really straight, but further spins bring out the real beauty in its sweetness.

Like the rest of Hart’s solo work (going back to 1989’s Intolerance and singles like “2541” – QRO video), there’s brightness to Hot Wax that isn’t too cheery or nauseating, but just a slightly different view of the world.  His evocative voice on “Schoolbuses Are For Children”, or the catchy up-life story to “California Zephyr” are world-wise and experienced without being weary, unlike the million-and-one alt-folk singer/songwriters out there today (another trend Hart thankfully missed…).  Even the finish “My Regrets” is building and growing, like he has none.

And that’s not even the finish, as Hot Wax ends with a new version of an old Hüsker song of Hart’s – a very old one, “Wheels”, from their inaugural release, Everything Falls Apart.  Maybe the first thing Hart ever wrote, certainly his first Hüsker song, converting the loud punk cry to an organ/synth press-haunt can at first feel like heresy, but it’s really a completely different song that can stand on its own two feet.  Like Grant Hart.