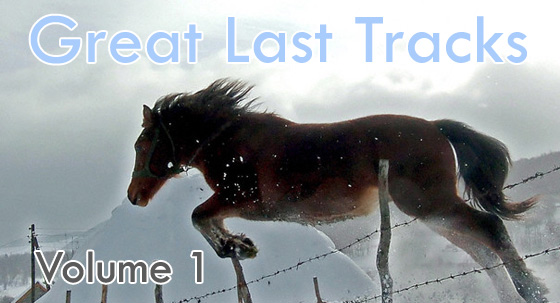 Below is an unordered list of what we feel are some of the greatest songs you'll ever find at the end of an album.  We invite you to discuss/argue these selections, and suggest your favorites for our next installment.  Eventually, we might just compile them all and hold a vote…

"Street Spirit (Fade Out)"
By: Radiohead
Found on: The Bends
Why so great: Alienation has never been so beautiful.

"A Day In The Life"
By: The Beatles
Found on: Sgt. Pepper's Lonely Hearts Club Band
Why so great: Some of rock's most important movements, plus a timeless John/Paul collaboration.

"747"
By: Kent
Found on: Isola
Why so great: Proves alternative music can be poised, too.

"Knights of Cydonia"
By: Muse
Found on: Black Holes & Revelations
Why so great: Climaxes the album's caged tiger appeal with a pure, prog-rock anthem.

"Only In Dreams"
By: Weezer
Found on: Weezer (Blue Album)
Why so great: As the song's latter half builds, crashes, and rebuilds, it's a youthful tour de force.

"All Apologies"
By: Nirvana
Found on: In Utero
Why so great: Sums up the Cobain-led disillusionment of the early '90s pretty well.

"505"
By: Arctic Monkeys
Found on: Favourite Worst Nightmare
Why so great: It effortlessly goes from quietly poetic to one of 2007's finest rock moments

"Gold Dust Woman"
By: Fleetwood Mac
Found on: Rumours
Why so great: Perhaps Stevie Nicks' finest effort, and it happened to be on one of the '70s greatest albums.

"So You'll Aim Toward The Sky"
By: Grandaddy
Found on: Sophtware Slump
Why so great: Hardly a better way to say goodbye.