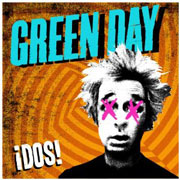 Hardcore Green Day fans are well aware of the their alter ego band Foxboro Hot Tubs and their 2008 debut album Stop Drop and Roll!!!.  The second album of Green Day’s current and epic album trilogy is called ¡Dos!.  It is completely reminiscent of the garage rock Foxboro Hot Tubs sound, and it has even been hinted at by the band themselves that it could have been the second Foxboro Hot Tubs album.

This sound is apparent from the album’s first full track “F*** Time” (which first debuted as an official Foxboro Hot Tubs song back in 2010 when Green Day opened for themselves as Foxboro Hot Tubs) all the way through the closing track “Amy” and is especially apparent on the songs “Stop When the Red Lights Flash”, “Stray Heart”, and “Lady Cobra”.  All of them mesh the garage rock sound Green Day is striving so hard for here with the traditional rock sound they have become so known for.

An interesting song that stands out from the others is “Nightlife”.  It still exemplifies that garage rock sound but it almost throws in hints of hip hop here and there – particularly with the female vocals by Lady Cobra, the previous track “Lady Cobra” being dedicated to her.  “Nightlife” is the low point of ¡Dos!.  The impact of the album as a whole may have been kicked up a couple notches if it had been left off.

Another noteworthy track is the album’s last, “Amy”.  It is a tribute to the late Amy Winehouse.  It is particularly touching when compared to the rebellious tone of the previous tracks and is an oddly fitting way to end ¡Dos!.  If you listen closely to the lyrics you hear Billie Joe Armstrong admitting he didn’t know Amy but wishes she wouldn’t have died when she did and almost as if – having struggled with his own demons – could have helped her with hers.  This idea is apparent in the lyrics, “No one really knows about your soul and I barely know your name / Amy don’t you go, I want you around / Please don’t go, do you wanna be a friend of mine?”

Comparing ¡Dos to ¡Uno! (QRO review), it doesn’t quite stack up.  Quite honestly, it feels like it could have been the trilogy’s b-sides release rather than an official installment.  It most definitely does not rank up there with Green Day’s greatest albums.  However, in that regard, it does leave a taste of excitement in one’s mouth for what might come next with the third and final installment in this trilogy experience… ¡Tré!.