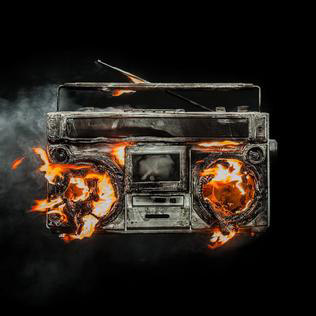 Green Day have long been a political punk band, if the kind of political punk band that is popular enough to play such ultra-mainstream events American Music Awards or iHeartRadio Festival. At the former singer/guitarist Billy Joe Armstrong chanted, “No Trump! No KKK! No fascism USA!” (an updated version of the chant from very political, very punk Million Dead Cops) – but before that came Revolution Radio, which sees the veteran pop-punk act in decent, but not revelatory, form.

Their first new studio album since 2012 triptych ¡Uno! (QRO review), ¡Dos! (QRO review), and ¡Tré! (QRO review), Revolution Radio is, in some ways, a return to form, in at least being just one album, and being political in the general sense. Songs like the speedy title track, emotional single “Still Breathing”, anthemistic “Youngblood”, and darker “Troubled Times” all work as what they are, but by this point can’t outshine Green Day’s bigger George W. Bush era protests (i.e., American Idiot).

Green Day will always be tough to measure, having grown from snotty grunge-era punks to popular rock veterans, with an audience that stretches across that. Revolution Radio won’t start the next revolution, and will likely not be as significant as whatever Green Day release during the next administration (the only upside to the Trump presidency is that music is gonna be great…), but can be on its playlist.