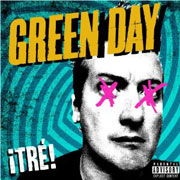 Well, here we are at the end of Green Day’s album trilogy.  Let’s start by asking the obvious question: “Can there ever be too much Green Day?”  The simple answer is, “Yes,” and from that standpoint, it can officially be said that Green Day has done themselves a disservice.

Without even listening to these three albums successively, by the time ¡Tré! rolls around, the consensus is that enough is enough.  As a stand-alone album it’s decent, maybe even more than decent, but Green Day shot themselves in the foot by releasing these albums so close together, and if album sales are any indication, that judgment isn’t off base.

Sure, it’s kooky Green Day and their “who knows what we’ll do next” approach to music making, but what would have been wrong with releasing these three albums a year apart?  Or maybe even six months apart, for crying out loud?  But as it happened, we didn’t get to fully digest ¡Uno! (QRO review) before ¡Dos! (QRO review) came along and now here we are not having been able to fully digest ¡Dos! before we have to try and muster the strength to be stoked about ¡Tré!.

There are a couple good tracks; that’s it.  The rest are forgettable and at times (“A Little Boy Named Train”) downright annoying.  They did a good job with the song “Dirty Rotten Bastards”, which has a feel similar to the epic “Jesus of Suburbia” from American Idiot,in that it just keeps going and getting more intense as it goes.  The next song, “99 Revolutions”, adds to the intensity that “Dirty Rotten Bastards” set up.  The best part about this track is the catchy chorus.  Both songs feel like they should be leading up to not only the conclusion of ¡Tré!, but the epic conclusion to this whole darn trilogy.  But then comes “The Forgotten”.  It’s an overly sappy ballad that, quite honestly, makes one wonder if Billie Joe Armstrong was trying to be a parody of himself when he wrote it.  If that is not the case and he was serious, well then…

It is going to take a hardcore, dedicated Green Day fan to not want to tuck these albums away (if you still buy physical copies) and not revisit them until years down the road when you’re ready to reminisce about, “Back in 2012 when Green Day overloaded the world with three albums in three months.”  Maybe they believed in the Mayan Apocalypse and wanted to go out with a bang, who knows.

On a personal note, I don’t normally say this about bands, but I don’t really care what Green Day does next, as long as they just go away for a while.

Bos Angeles – Taking Out the Trash