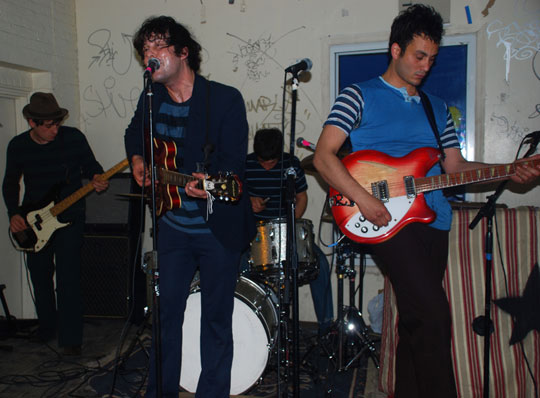 Click here for photos of Gringo Star at SXSW 2009 in Austin, TX in the QRO Concert Photo Gallery

Click here for photos of Gringo Star at CMJ 2008

Whenever someone talks about having seen Atlanta’s Gringo Star, the first thing they invariably mention is that all four guys in the band switch up instruments – including drums.  But that unfortunately overlooks how the band brings a good time to their shows, no matter who is playing what.   And even late on a Thursday night in Brooklyn’s dingy, DIY, Death By Audio, they brought the fun.

Originally scheduled to play at 10:00 PM on February 26th, Gringo Star didn’t go on until after midnight.  It’s not surprising things are slap-dash at Death By Audio (QRO venue review), which is effectively two rooms with a few speakers and lights – they don’t check I.D. (despite being all-ages), or even if you’re bringing in outside beer in your bag (which many seemed to have done, to judge from the place’s plethora of sixteen-ounce Budweiser cans – that they weren’t selling in the back ‘bar’…).  But that could have very easily dragged down Gringo’s set, a weary band meeting a weary, and possibly depleted, crowd. 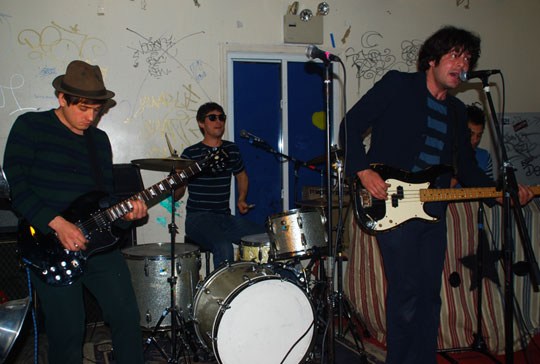 Thankfully, Gringo Star’s music is just the kind of thing to pick up the rockin’ spirits (especially to those who’ve been drinking some spirits…).  Mostly, the band stuck to the upbeat, dirty saloon-style tracks from their debut LP, All Y’All (QRO review), along with some gritty guitar work from whoever was on the axe at that moment.  That held true from the night’s start with “I Will Not Follow” to the “All Y’All” finish, with a guitar jangle-jam cutting through even on the new “Work It”.  The band’s old time-y dance hall piano wasn’t missing, either, with the new “No Man”, plus Y’All’s “Don’t Go” – though they did, for some reason, skip that record’s standout piano number, “Holding On To Hate” (QRO video). 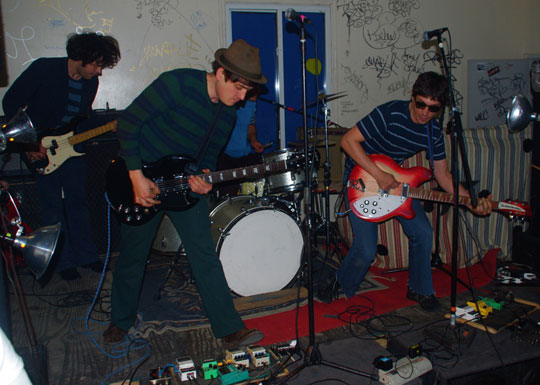 The wistful, alt-twang “Transmission” did make an appearance in the middle of the show, but fitting the setting, time, and crowd, the band stuck mostly to the good times.  There’s a certain seventies laid-back charm to Gringo Star, which can come off as a little sloppy sometimes on All Y’All, but live and in-person, that all only makes the band more fun, no matter who’s on what – and especially after you’ve had a few…