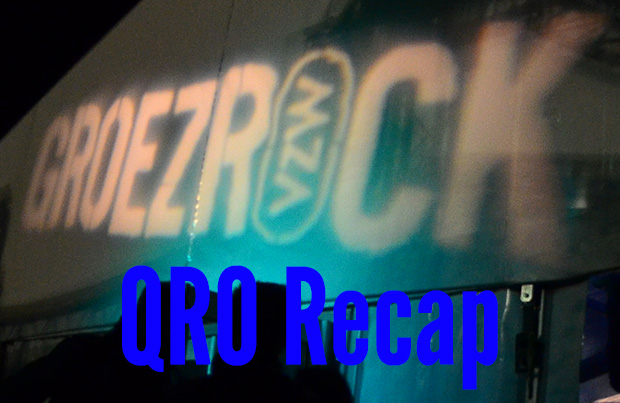 It’s not new news that each year the number of European festivals have increased and existing festivals have grown larger due to a growing industry, and the changing nature of the music industry, whose focus has evolved around touring rather than record sales.  Aside from sales, numbers, figures and profits, there is a reason why bands do what they do, why fans commit the way they do, subject themselves to sleeping in 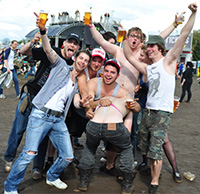 grotty tents and without running water for days, and Belgium’s Groezrock, which has grown from 400 attendees to over 32,000 in it’s 21-year-old history is a particularly prime example of the love that bonds music, fans and bands together in Meerhout, April 28th & 29th.

Groezrock grows year on year as the word has spread that this festival presents perhaps the most stellar line up in hardcore, punk, ska, screamo and emo.  Throughout the two day weekend, despite the dampening weather, there is little left to be desired in terms of music – the 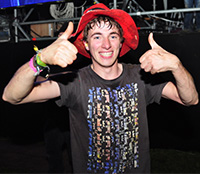 programming of the stages is second to none, with distinct identities of the stages (however, only musically, for the drunk, tired or the visually impaired, the stages looked disconcerting similar to the eye), Impericon for the harder screamo/emo bands, the Main Stage for the biggest names, Etnies for those long-term veteran, landmark bands and upcoming hyped bands, and the acoustic stage for, well, the obvious.  Additionally, the Macbeth-sponsored stage hosted a range of newer, smaller acts edging for breakthrough for something a little more low key.  Still not getting the hang of it due to that hangover?  The staggered timetable allows for guests to check out each stage and enough time to catch a little of each act, even at the later hours of the day when the sets tended to be longer and bands bigger. 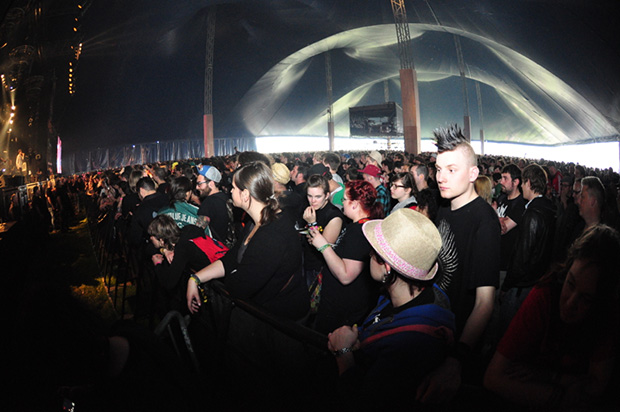 On a side note in terms of comfort, all stages are undercover.  Due to the festival taking place early in the festival season, this provided a nice cover from the drizzle, when it became chillier later in the day, or when covered in beer.  If one needs a change of clothes or an extra jumper, two most impressive merchandising tents were full of everything one could ever want – two mini malls of music merchandise, you wanted to kit yourself out to look the part. 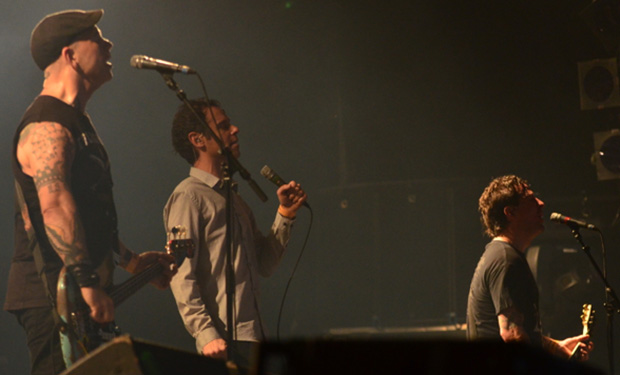 The names on the line up, regardless of organisation speaks for itself – reunion shows for the legendary Refused, headlining on the Saturday night, and Good Riddance.  In addition, the line up includes absolute hardcore legends such as 7 Seconds and Gorilla Biscuits, who provided a showstopper pretty much validating the entire weekend, plus special one-off acoustic sets from artists Anti-Flag, Bouncing Souls, Chuck Ragan and Garrett Klahn of Texas is the Reason fame. 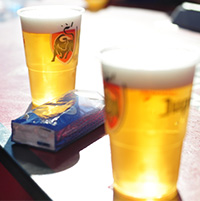 In any case, if all else fails, the Jagermeister’s DJ stage playing disgusting euro-dance music and Belgian Beer Juliper if available all round, and if one really wanted to mix it up (read: throw up), Juliper even have two mechanical bulls for your riding pleasure.  Groezrock remains to be music-centric, unlike many of the other growing festivals in Europe who prize themselves on the range of activities and arts they provide.  However, this attributes to the more chilled atmosphere, perhaps the more reasonably 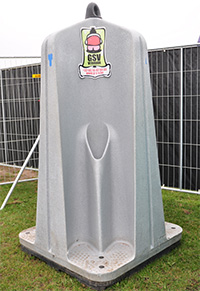 priced tickets and that the festival has attracted, and continues to attract, those who have a passion for the music.  This was additionally noted by the security, who stated that the atmosphere differs from other festivals – people are friendlier, more relaxed here with a real passion for the music.  It shows, and one can feel it.  Many people from across Europe and beyond make the trip; An increasing amount of Germans, Australians, Swedes, French, and a large number of English were in attendance – but all with one common passion.

It’s always noting that the festival is also vegan friendly – appropriate as many of the bands performing come from straight edge roots – with vegan options at the food stalls, although all together the choices for food and amenities are limited. 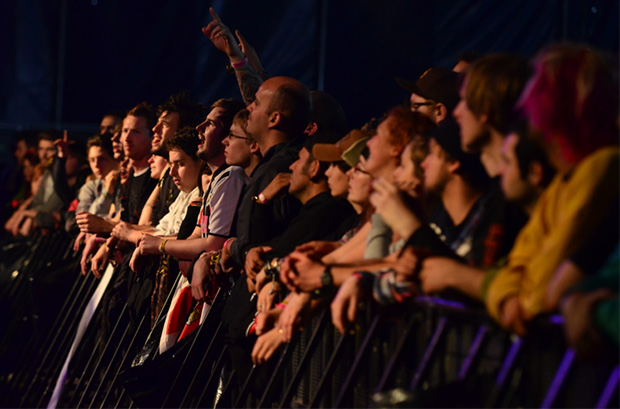 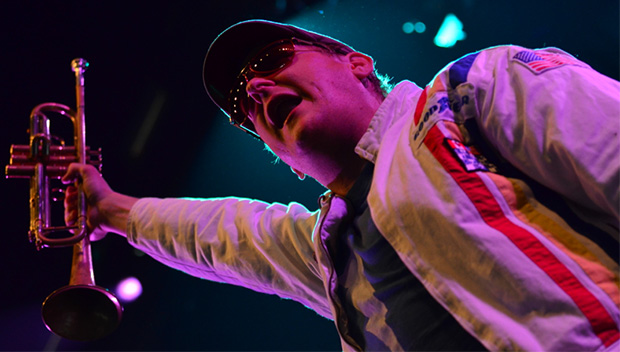 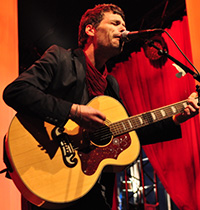 Groezrock was full of stunning musical performances, just as expected – the romping trumpets of Reel Big Fish to get the party started, the huge chandeliers, red velvet curtains and soft voice of Garrett Klahn donned with acoustic guitar – although the festival indeed has provided such a variation of acts and genres, the admiration and respect remains from the crowd. 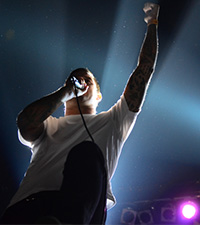 The reaction to melodic core bands such as Lagwagon, from the era of where bands such as Millencolin and No Use For A Name used to reign obviously hold strong memories for many of the festivalgoers, taking them back to memories of punk youth.  However, even more recent bands who perhaps do not hold the same nostalgia, such as Australia’s Parkway Drive, attracted a notable response, with an insatiable energy from both crowd and band and redeeming themselves as a band not just for 15-year-olds. 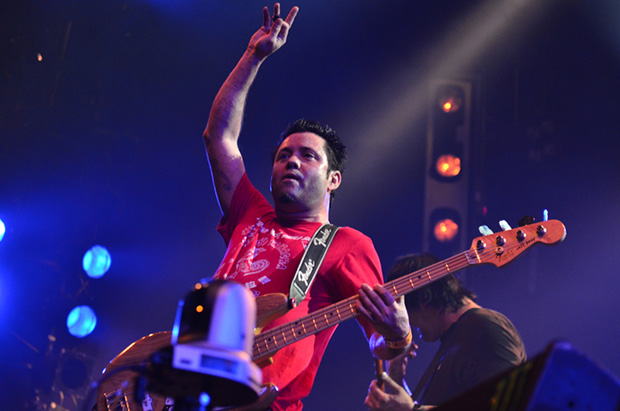 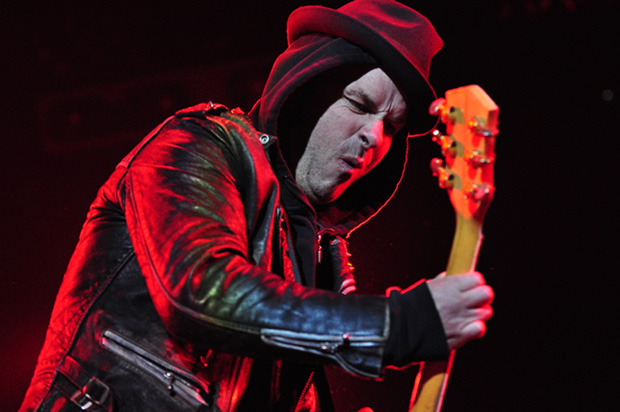 However, it was the headlining Rancid who take it to the eleventh notch with a superb display of rock royalty.  With tracks such as “Roots Radicals”,  “Salvation,” “Time Bomb”, Rancid still can churn out the hits, and it’s easy to forget how much stellar material such a solid band have, with a reputation worth every note. 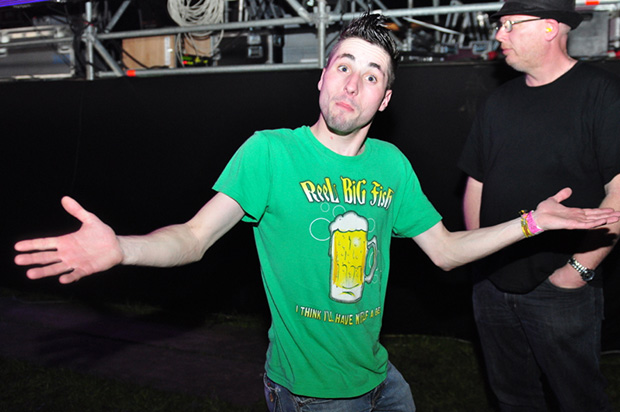 Garrett Klahn of Texas Is the Reason covering Maritime’s “The Window In the Door” live at Groezrock 2012: 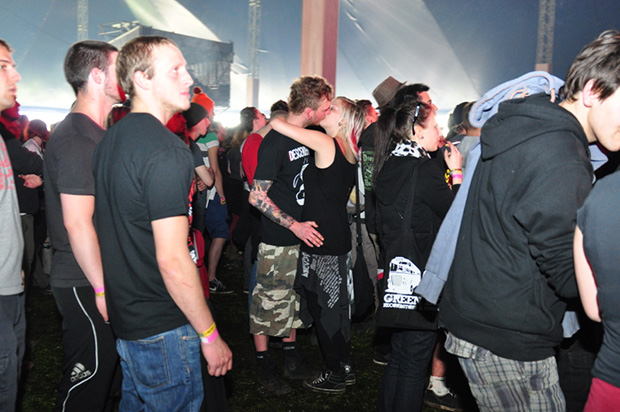 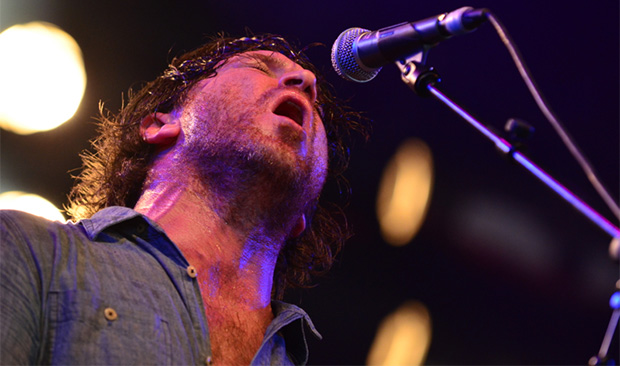 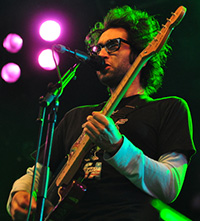 The hype continues as Motion City Soundtrack took the stage on a rainy Sunday afternoon.  A true charmer, frontman Justin Pierre’s voice got the party pumping as not to dampen sprits.  Likewise, punk rockers Hot Water Music continued the shindig, with tracks like “Rooftops” causing even festival staff to sing and dance along – the true power of Chuck Ragan.  Dave, frontman of The Loved Ones joined Hot Water Music for the track “Trusty Chords”, and throughout the entire festival it’s clear to see how this festival is a celebration of punk rock roots and family. 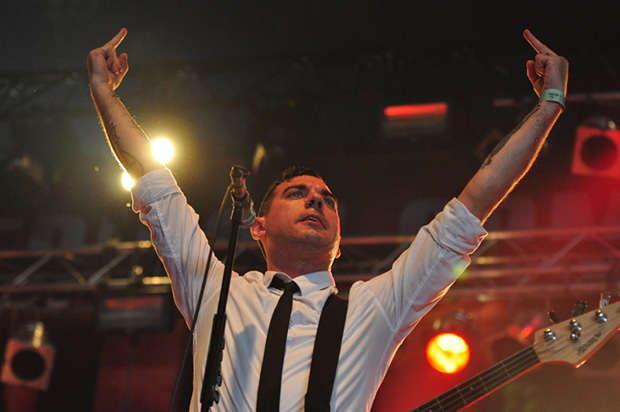 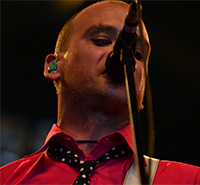 If there’s one band to bring the party decorations to the celebration, there’s Alkaline Trio.  Matt Skiba and his eccentric stylings gather everyone’s attention: bright pink shirt, dotted tie and dark lips and eyes.  Although the songs were a bit morose in content, there’s always a wink on the side.  However, a band a little more on the serious side was Anti-Flag.  Infamous for their political stances – anti-war, class struggle and human rights – they might have bought a heavy intellectual load, but still managed to delight with strong anthemistic melodies, riling up the crowd. 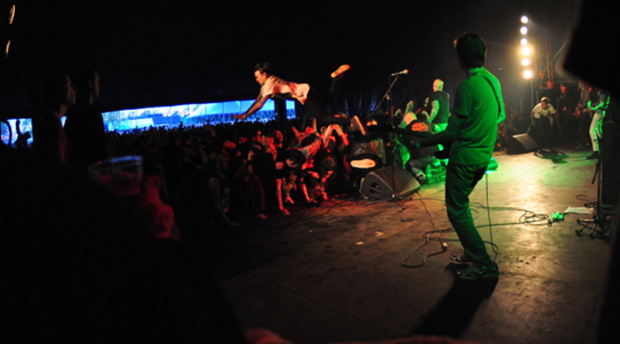 Closing up the night at the Etnies stage were 7 Seconds, who provided a solid set of sing-along classics, including “99 Red Balloons”, stage divers galore and power pumping.  However, as remarkable as 7 Seconds were, what was to follow was something truly special.  Russ Rankin from Good Riddance, Chris Head of Anti-Flag, Alkaline Trio, Dennis Lyxén of Refused were simply some of the artists who had taken the time out to see Gorilla Biscuits, noted as unmissable – people rolling and lolling across the stage, hugging leader singer Civ, beaming with joy, then throwing themselves back into the fray.  Not once, or twice, but perhaps at an insane pace of 15 stage-divers a minute, until the last song.  Crowds flocked to the stage, packed with festival goers, the platform holding the drum kit being pushed towards the back of the stage and held back by staff, security and even members of other bands.  Although Gorilla Biscuits may have only had two albums 25 years ago, their presence and noteworthiness as one of the leaders in the New York hard-core scene remains. 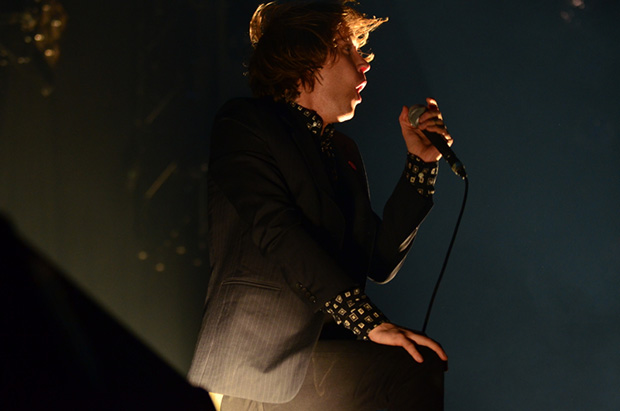 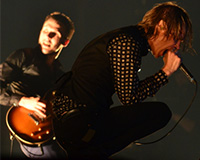 The weekend sadly must end somewhere, but what better than to end the weekend on a true high.  The stage, draped with a holy black banner with unrest is spreading – it can only mean one thing… Dennis Lyxén swept across the stage, fire in his belly and love in his heart- stating that this is the biggest show Refused have ever played and how much it means.  Classics “New Noise” and “Rather Be Dead” create absolute unabated euphoria, a perfect ending to a superb weekend.

Eric Rosenfeld of Versus You playing “When It All Goes Down” live at Groezrock 2012: