“This is group love, this whole fucking room!”... 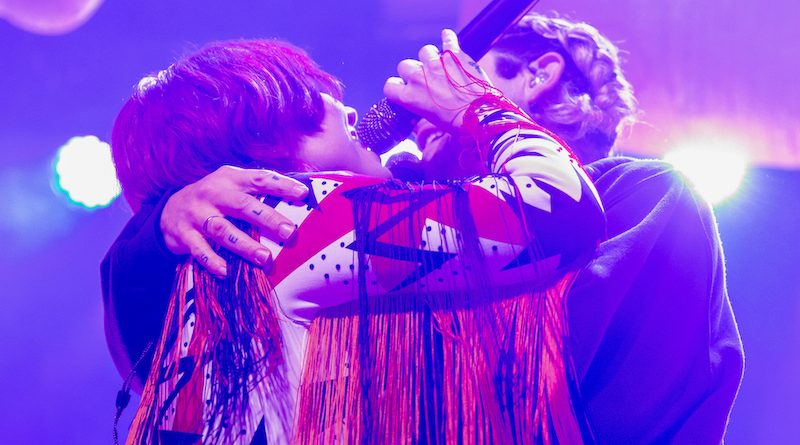 In November of 2012, Grouplove played a Manhattan that had just been hit by Hurricane Sandy, where half of the island-of-all-islands was in darkness, but the show had to go on where it could. There was a real catharsis to the event (if you could make it there from your friend-with-power’s couch that you were sleeping on, with the subway barely running), an expression of hope & unity. That spirit came back to the Big Apple just under a decade later, this time at Brooklyn Steel, as the Group return to Love on Wednesday, February 23rd.

Grouplove had the awful timing of releasing Healer (QRO review) in March of 2020, and though the title was accidentally appropriate, they couldn’t tour it, only do some Instagram livestreams where they talked with actual fans. That time off the road did result in last year’s This Is This (QRO review), plus its own livestream (QRO This Is This livestream review), and now they were finally able to really hit the road – only for it to occur as Putin’s tanks started rolling into Ukraine. In short, perhaps another bad time to party, but a perfect time for the Grouplove catharsis.

Oh, and it was singer/keyboardist Hannah Hooper’s birthday! This was remarked upon many times during the show, Hooper admitting to not being a big ‘birthday person,’ but she was this night, “Best fucking birthday ever!” While she didn’t “smash my face in cake” like she sings on This’ “Deadline” (QRO review – explaining that she did that once, only to get frosting in her hair that caused her to smell like vomit for two months…), she did get a cake, with candles & balloons. And she was definitely celebrating on stage, but so was the whole band – and the whole crowd.

“This is group love, this whole fucking room!” remarked singer/guitarist/Hooper’s husband Christian Zucconi (QRO interview with them together), and it really was, Brooklyn Steel (QRO venue review) loving being out, loving life. There were hands swaying in the air for encore return “This Is Everything”. The audience welcomed two new songs on the night, the bigger & slower “Star” & “Stay Close to the Cheese”, the first of which Hooper introduced by noting that, “No song is ready to be played live,” asking the crowd to, “Just be kind and clap at the end,” and afterwards said of their positive reaction, “Couldn’t be a greater birthday gift than that…” Hooper recorded the crowd during “Cheese” on her, “Early ‘90s skateboard cam,” for the song’s music video, afterwards, proclaiming, “Music video done!” There was even a raffle of one of Zucconi’s acoustic guitars, given out to the winner in the crowd before the final song of the night – didn’t even check the ticket number at that moment, believing in the honor system.

And yes, there was a shoe-y [editor’s note: one day we’ll figure out the proper spelling…]. A staple of Grouplove shows, the band gets bassist Daniel Gleason to drink a beer out of one of his shoes. It’s such a staple that it’s not a surprise anymore, but has evolved into something one looks forward to, Hooper pushing early in the set for one (after when she said how she wouldn’t put her face in a cake). Hooper got the crowd to chant, “Shoe-y!” A crewmember was right there with a beer. After pounding it, Gleason tossed the shoe to his keyboardist.

While technically this would be a tour of This and Healer, and both records definitely featured on the setlist, by now Grouplove have a back catalogue of songs that fans want to hear. So, yes, early single “Itchin’ On a Photograph” came in early, and the evening closed with their breakthrough “Colours” (QRO review), but other pieces have evolved into staples of their own, like Healer’s “Deleter”, “Welcome To Your Life” off of Big Mess (QRO review), and Spreading Rumors (QRO review) single “Ways To Go”. Early hit single “Tongue Tied” went into their recent cover of Robyn’s “Dancing on My Own”. And “Happy Birthday was sung – twice (okay, you won’t find that one on many upcoming setlists…).

Life isn’t easy, and it ain’t normal right now, from anti-vax protests – in Canada? – to full-on land wars – in Europe? – so we all need something to celebrate, and not just on our own, but together. We need Grouplove.