Click here for all of QRO’s coverage of Grouplove in ‘Spotlight On : Grouplove’ feature

December is a time of scarce concerts throughout America, with acts not touring November-to-December (thanks to Thanksgiving) or December-to-January (thanks to Christmas/New Year’s), and it’s only worse in the colder climes like New York City.  The best that you’re going to do are holiday parties that might have some music, but those are often invite/RSVP-only.  This December had the likes of Pandora Discovery Den (QRO live review), SPIN Year In Music Party (QRO live review), Pitchfork Review Launch Party (QRO photos), and others – events that one might have been interested in as ‘events’ more so than for who was playing, especially as the acts were often very dissimilar, to appeal to as wide an audience as possible.  But two events that were definitely about seeing a single band both came right before everything closed down for the holidays, thanks to Grouplove, who not only played for PBS’ Front and Center at Iridium Jazz Club on Tuesday, December 17th, but also did a free Rolling Stone Private Concert Series gig the next night at (le) Poisson Rouge (QRO venue review).

Both gigs were actually make-ups after cancelling last month, as Grouplove singer/keyboardist Hannah Hooper was sick (of course, bassist Sean Gadd couldn’t make the new dates, but the show must go on, and bassists are a little more replaceable than your female singer; in Gadd’s place was Dan Gleason of friends/labelmates Manchester Orchestra, whose own singer recently appeared on stage with Grouplove in New York – QRO live review).  The two nights were also probably the last nights that the shows could happen, as Thursday afternoon/evening would see New Yorkers start to leave the city for their holiday travels.

But the events were very different settings.  Tuesday night saw Grouplove at Iridium Jazz Club, a downstairs restaurant in Midtown, on the same block & just a few doors down from The Late Show with David Letterman’s Ed Sullivan Theater.  While labeled and designed as a jazz club, Iridium is best know for being where Les Paul, the inventor of the electric guitar, played weekly from 1995 until his death (at age 94!) in 2009.  The sound’s great, but you are watching a performance while sitting down at dinner tables (and could get dinner before/during the early show).  Meanwhile, though (le) Poisson Rouge does aim for some of that same jazz club heyday feel, for a band like Grouplove the tables and chairs were removed, and the gallery bar opened, for a packed rock club (your correspondent only just made it in time for the later show, after attending one more holiday party, for Paper Garden Records & INDMUSIC). 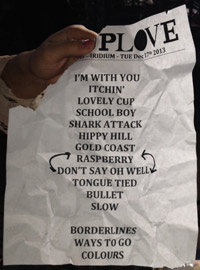 One thing that was similar was Grouplove’s set list, from opener “I’m With You” to closer/breakthrough single “Colours”.  With sophomore full-length Spreading Rumors (QRO review) out just months ago, it would have been easy for the group to let it dominate the set list, and just throw in the singles from debut Never Trust a Happy Song such as “Colours” (QRO single review).  At first it seemed like it was going to be that way, with only non-Rumors pieces singles “Itchin’ On a Photograph” and “Lovely Cup” until midway through the set, where Grouplove reached back even farther, to their first EP, for “Gold Coast” and “Don’t Say Oh Well” (the latter the first song the band ever wrote, when they met at an artist’s retreat in Greece).  Some of the slower songs such as “I’m With You” (which is an odd opener, but really couldn’t fit anywhere else on the set list), “Hippy Hill”, “Bitin’ the Bullet”, and “Slow”, do feel a bit more like pieces that the band wants to play, over those the crowd wants to hear.  At Iridium, singer/guitarist Christian Zucconi remarked that, “Things are gonna get weird” before “Bullet”, and drummer Ryan Rabin said afterwards that things did get weird, but in a “hot way,” to which Zucconi replied, “Okay, now things got weird…”  Rabin made that remark when he came out from behind his drum kit to play a floor tom for “Slow”, which has been amped up live by the band, from Rabin’s glow-in-the-dark drumsticks (and temporarily going back to his kit during one of the song’s breakdowns) to Hooper flipping up over her face the skull mask/hoodie on her skeleton bodysuit.

The Iridium show, being strictly VIP and contest winners for the late-announced event, wasn’t as full as it could have been, but that did mean that those there were big Grouplove fans, and got reseated up closer to the front (your correspondent’s table was the rocking-est…).  Also, it seemed like every band member’s parents were there, always a special event, and if you’re gonna be doing a taping for PBS at jazz club/restaurant in New York City where Les Paul played, you’re gonna invite your parents (though it was still way louder than the staff there was used to).  (le) Poisson Rouge, meanwhile, was packed despite the cold weather and rescheduled date – of course, it had an open RSVP (which had stayed open longer than the one for the original November date) and open bar (well, for Budweiser and Diet Coke – lots of people ordered & paid for other drinks).  Though the set lists were the same, it was a little reminiscent of the band’s recent tour playing two nights in a city, one electric (QRO live review), and one acoustic.

Grouplove next head down under, where it’s warm this time of year, for the Australia/New Zealand Big Day Out Festival, then hitting up Japan & Europe in February, and return to tour America in the spring.  But they closed out 2013 in super-style.

The Head and The Heart – Let’s Be Still