It’s amazing how far Grouplove have come – and in such a short time.... 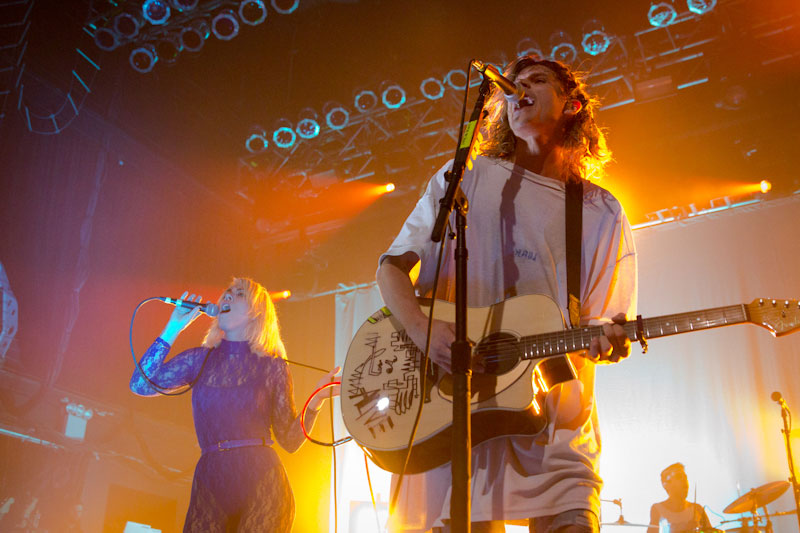 Click here for all of QRO’s coverage of Grouplove in QRO’s ‘Spotlight On : Grouplove’ feature in the QRO Concert Photo Gallery

It’s amazing how far Grouplove have come – and in such a short time.  They’re still youngsters, yet have already had two hit major label albums, Never Trust a Happy Song and last year’s Spreading Rumors (QRO review).  They just played Down Under as part of Big Day Out (QRO photos), and last December even taped a session of PBS’ Front and Center (QRO live review).  And on March 26th & 27th, the band managed to return to New York’s massive Terminal 5 for back-to-back nights. 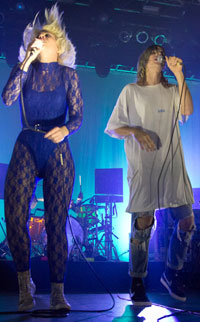 Technically their third & fourth time at the venue, having first opened for Young the Giant there (QRO photos from that tour), their last time at the converted, multi-story warehouse in West Midtown (QRO venue review) was a special one (QRO review), headlining and closing out their final tour off of Happy Song before they were to go into the studio to record Spreading Rumors.  Oh, and it was just days after Hurricane Sandy, with Lower Manhattan still in darkness – opener MS MR (QRO photos) joked about it then when they closed with “Hurricane”, and closed with it again this time when they likewise returned for another go at T5 with Grouplove (QRO photos).  That 2012 Grouplove show had confetti (QRO video) and an acoustic song (QRO video), as it was ending a tour, but this year’s shows were in the middle of a tour – but were shows, plural, as the group has hit the level where they can fill the space two nights in a row.

The crowd was a wide mix, from young to old – truly.  There weren’t just young bros there with their girls (who have better taste in music, perhaps, than boys…), but even parents with their children.  And your correspondent spotted at least one distinctly older couple, as he was stuck behind the slow-movers when trying to navigate the throngs.  Yet everyone in the audience still knew enough to sing along to “Come Together” when it played on the house music before the set began.  Even members of the usually taciturn security were spotted bouncing to Grouplove. 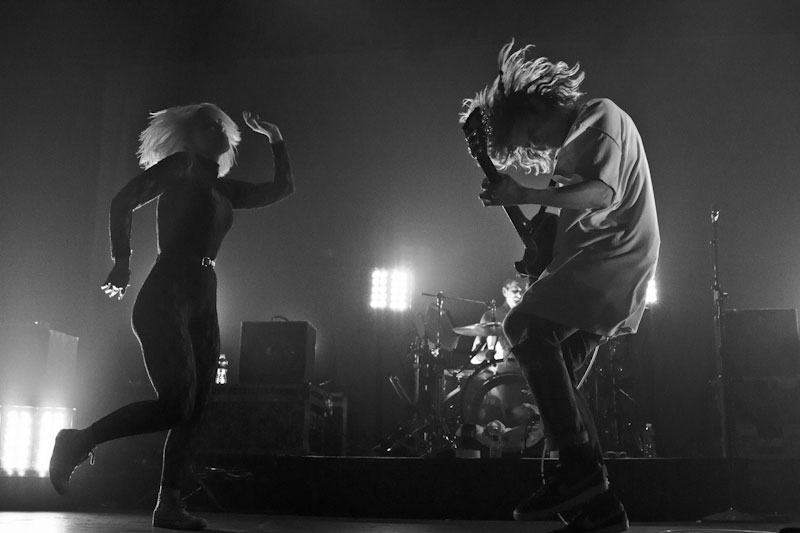 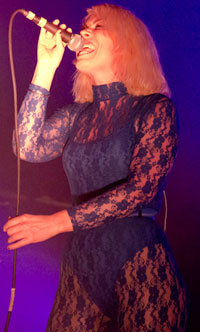 The song selection naturally couldn’t vary too much from recent shows for the much-on-the-road band, since they’ve only got two albums and an early EP to work with for their lengthening sets – though this time did see them throw in a well received covered of “Drunk In Love” by Beyoncé.  What was perhaps more interesting was how they arranged the songs in the set list.  Early single “Itchin’ On a Photograph” was moved out of its lead-off spot in favor of newer “I’m With You”, a stranger Grouplove piece that probably wouldn’t fit anywhere else.  Instead of saving both of their other two early, breakthrough singles “Tongue Tied” and “Colours” (QRO review) for the encore as they had usually done previously, “Tongue Tied” was shifted into the main body of the set, and the encore instead had “Colours” and two newer songs, “Borderlines and Aliens” and single “Ways To Go”. 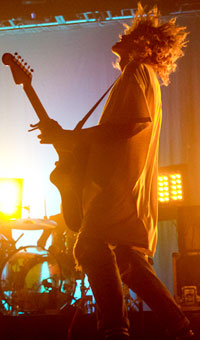 Even when things stayed the same, they still changed.  The slow “Slow” was still the song into the encore break, because it’s a hard song to immediately follow, but it’s distinctly improved in concert from Happy Song, thanks to being played live so much, as was “Hippy Hill” (“I used to not be into this song – now I love it,” was overheard in the crowd).  Singer/keyboardist Hannah Hooper still had on a bodysuit, but it wasn’t the skeleton bodysuit of last year (QRO photos).  The new suit seems to have done the impossible and given her even more energy, as she was not only rarely still, but rarely even in the same place, with her and singer/guitarist Christian Zucconi letting their hair whip.  Unfortunately bassist Sean Gadd’s absence may have become permanent (instead on bass was still Manchester Orchestra’s Dan Gleason), so you couldn’t get his hatted long hair-whip, or the song he sang lead on, “Chloe” (QRO video from previous Terminal 5 performance), but guitarist Andrew Wessen still had his locks and “Spun”.  And drummer/producer Ryan Rabin is overshadowed live as always (blame the short hair), except when he got to come closer to the front of the stage to play floor tom with light-up drumsticks on “Slow”.

“What a surprise – New York’s the best night of the tour…”  Grouplove were actually recording the entire evening’s set when Zucconi made that remark, and they’re definitely a band who should have a live album – and, more generally, be caught live, whether at new places or old, one night or two (like their double-night return to Stubb’s in Austin on April 5th & 6th – QRO photos at Stubb’s).  Where can they go next? 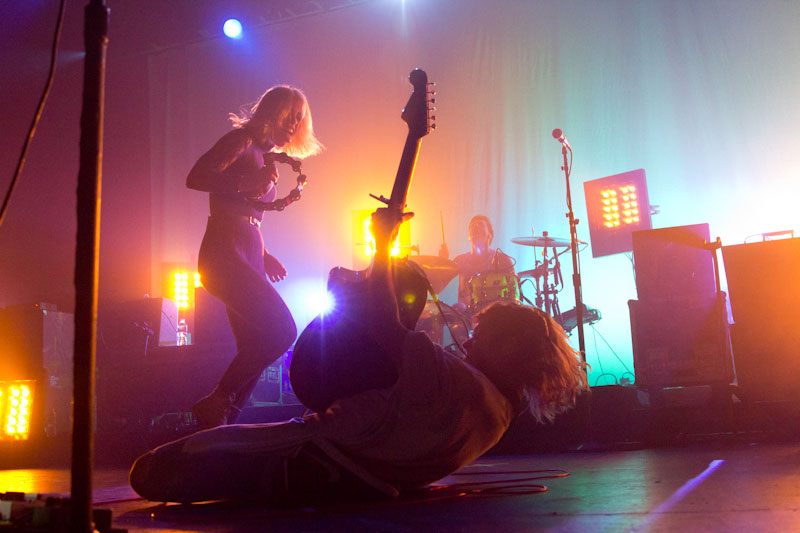