Almost exactly a year ago, everything shut down, as the pre-apocalyptic fears of a looming virus burst into reality around the world.... 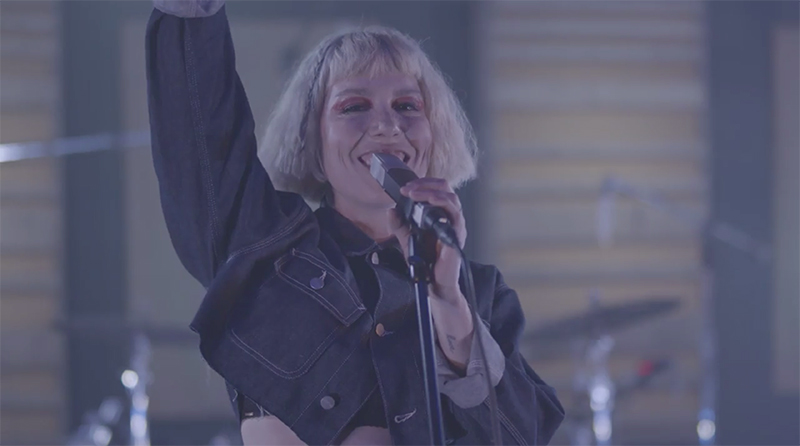 Almost exactly a year ago, everything shut down, as the pre-apocalyptic fears of a looming virus burst into reality around the world. In timing perfectly imperfect, or imperfectly perfect, Grouplove also then released their new album Healer (QRO review). Instead of the big tour that they had planned, they were doing Instagram performances from front-couple Hannah Hooper & Christian Zucconi’s house, which included sharing their livestream with random fans that Hooper dubbed (and sang) “Rolo-Rolodex.” The group was one of the first to share love online like this during everything, and was even one of the first to do a ‘live remote performance’ for a talk show, literally Zooming into Jimmy Kimmel Live from their street. But no band could keep that up, and after a ‘virtual prom’ (another COVID event they helped pioneer), they returned to what they could make of their regular lives.

But those regular lives included making a brand-new album, This Is This, which was surprise announced on Wednesday, March 10th to come out that Friday the 12th – with a special livestream in the Thursday in between, playing the whole new record. Indeed, it was the first of their planned monthly series on Moment House.

It was a bold move for the livestream, eschewing coming in with the old fan favorites, instead bringing songs never heard outside of a few at a special no-phones Chicago show in 2018 and the just-released single “Deadline” (QRO review). The folks in the chat before the show did want to hear some stuff they knew, but positioning the livestream as the first of many meant that those would be gotten to in future months, and made this a sneak preview of This, which would drop hours afterwards. Also, everyone knows that acts like to play their new stuff the most, especially brand new stuff that they’ve been dying to get out into the world, and Grouplove are a band that relies on their own excitement, as well as that of their excitable fans.

Going top-to-bottom, This often displayed a harder side to the group in these hard times, starting with opener “Primetime”, and the quiet/loud rock of “Scratch” and album closer “Shout”. But there was also the slow Grouplove heart in “Oxygen Breathing”, chill bop “Shake That Ass”, and party time with “Just What You Want”, the last of which had guest star from the record Dani Miller of Surfbort guest-appear via Zoom like a twenty-first century Joan Jett. Single “Deadline” was a big hit, with the song a nice mix of all things Grouplove.

Oh, and don’t worry, they still added on their original breakthrough single “Colours” to close…

While many livestreams in these last twelve months have been pre-recorded, this was a real live show. And while many live shows have been lower-tech affairs, even just an iPhone on Instagram like the early days, the Moment House production was a big affair, with lights, camera, action. The camera work was particularly strong, nicely cutting from one shot to another, and got the whole band, Andrew Wessen on guitar, Daniel Gleason on bass, and Benjamin Homola on drums – plus two new members of the Grouplove family, Joseph Dempsey and Cam Latham. There was even a ‘tip’ function to give a dollar or a hundred dollars.

And the group added a special live chat afterwards. Part of the reason it was special was because of its own tech problems, a delay on the video for the band that flummoxed them, though was actually kind of funny for the viewer. First Gleason & Homola were on live even though they didn’t know it, a very Grouplove move (they’re kind of the opposite of the accidental mute button). Later, when showing her art-sparkled teeth in an extreme close-up, Hooper & co. got to see the close-up thanks to the delay. Questions & answers included showing off their shared “GROUPLOVE” tattoos, Atlanta-based branded beer, introducing Dempsey & Latham, and more.

They even responded to your correspondent’s question about a branded Grouplove shoe specially designed for the “shoey,” a running staple of their shows where Gleason (or “Danny McBride on bass” as someone said he looked like & he laughed) drinks a beer out of a shoe. Usually done before a show, sometimes during, it had been forgotten beforehand, but the rest of the band (and all of the chat) made sure Gleason did it in the Q&A (no matter how hard he tried to change the subject, like mentioning that their families, including parents, were watching…). And it ended with fan request BoJack Horseman theme song, the closing credits where Zucconi sings about being big “back in the nineties”, though the words after that he “don’t know”…

It’s been one year since everything shut down (couldn’t it have been one week, like the Barenaked Ladies promised?…). Things have changed, from the president to what we mean when we shout-demand-cheer, “SHOTS!” Who knows what the future will bring, how much of the old world will come back, how much of the new world will stay, and how much everything will be different all over again. But Grouplove brought it all.