Guided By Voices – The Bears For Lunch 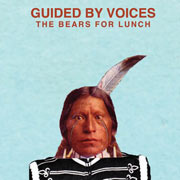 Being a prolific musician can work against you: one’s best pieces have difficulty shining amid all the others and get forgotten quicker, while many listeners give up trying to keep up.  Robert Pollard is an especially prolific songwriter, originally in nineties lo-fi alt-heroes Guided By Voices, then on his own, and now both.  The 2010 reunion of the ‘classic’ 1994-1996 GBV line-up slowed him down a bit, with little new that year or the following, but 2012 has seen him bring back the Guided By Voices name with the release of not one, not two, but three new GBV albums (plus a solo Pollard one).  That could wear any listener out – but 2012’s final one, The Bears For Lunch, is the best GBV of the prolific year.

Now, this is still a Guided By Voices album: tons of tracks averaging just under two-and-a-half minutes, but it’s still two fewer tracks than 2012’s prior Class Clown Spots a UFO (QRO review) and Let’s Go Eat the Factory (QRO review), whose song lengths average under two minutes flat.  There’s still some forgettable songs (such as “The Challenge Is Much More”), random outliers (like the just piano & vocals “The Military School Dance Dismissal” co-written with bassist Greg Demos), and sub-minute segue (“Smoggy Boy”), but those don’t fill up as much of Lunch as prior releases (there’s only one sub-minute song, for instance).

Instead, Guided By Voices actually build upon the lo-fi nature that originally got them such acclaim.  There’s their core lo-fi procession, which is all over the record, from the not-so-great (“Tree Fly Jet”) to the great (“She Lives In an Airport”, which precedes “Tree” and doesn’t do that song any favors in the comparison).  They can do Beatles-esque bright with lo-fi (“Waving At Airplanes”) and even lo-fi wistful carry (“Skin To Skin Combat”) – interestingly, those are two of the four non-Pollard-written tracks, from guitarist Tobin Sprout.  And Lunch opens with an artistic lo-fi in pieces such as “King Arthur the Red”, Sprout’s “The Corners Are Glowing”, and “Have a Jug”, which evoke the lo-fi artistry of the not-as-successful commercially, but more-acclaimed-critically contemporaries Sebadoh (QRO live review).

Even hard-core Guided By Voices fans, the ones who followed Pollard’s solo career and consider the ‘classic line-up’ reunion the greatest of this century/millennium’s nineties alt-reunions, would be forgiven for not being able to keep up with the band’s 2012 output.  But GBV have saved the best for last.